We've been running a somewhat latent Bus Stops that Time Forgot feature over the past few months, where we display up-to-date photos of bus stop flags that are either ancient and bare the name of an operator of yesteryear or simply do not see any service call there now. Today, while meandering along the leafy lanes of Lincolnshire, I managed to 'bag' the flag attached to a streetlight located on the periphery of Gosberton. 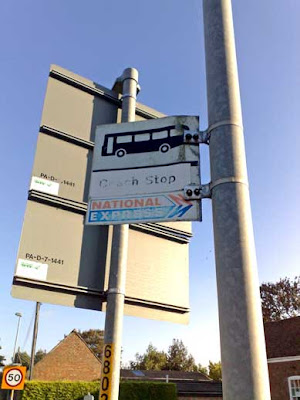 'Gosberton, Methodist Church' was the National Express timing point for this stop, well, up to 12 years ago. Thereafter no service has ever called here
It pre-dates that of Ingoldmells and certainly that of Oxford Street, Grimsby. This was one of the flags used by the National Bus Company for its National Express services before coach deregulation in 1980. Of note is that the flag pre-dates the National Express fleet name design and double-N logo that accompanied each other until they were replaced with the arrow-linking circles from 2002.

The original wording, slightly visible from the other side, stated NATIONAL EXPRESS on one line, all in red and no logos. We suspect this dates back to the late-1970s.

National Express Service 049 was the last to call here pre-1998, when loadings for Gosberton and neighbouring Sutterton became so low, the service was routed via the main A16 which had recently opened along the trackbed of the former Great Northern Railway. The service was re-numbered 449 from 1998, too, though its route remains identical to that of today: Mablethorpe-Peterborough-London. 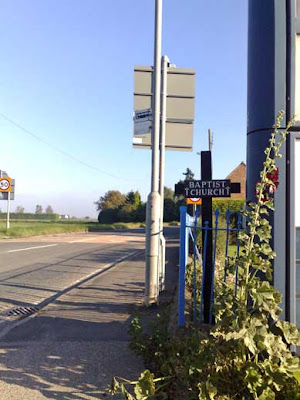 Gosberton did not lose its only direct service to London when NX pulled out. TransLinc's one-a-day service to London called here, operating into the village centre. This, sadly, was withdrawn on 4 September 2007
The flag has never been taken down. The one at Sutterton (opposite the water tower) was still in situ up to a few years ago, though it is no longer there. We've been told there's one at Glentham, just off the Roman road, Ermine Street - a location, incidentally, where the forthcoming LEYTR Committee Meeting is to take place.

Changing subject slightly, though keeping with the yesteryear theme, there aren't many vehicles that first entered service in April 1975 which still performing regular services today. Lincolnshire has long boasted one such vehicle, and it was while passing through the hamlet of Haltham, just south of Horncastle on the A153 yesterday, that I finally caught up with a 35-year old Leyland Leopard, new to British Airtours of Horley. 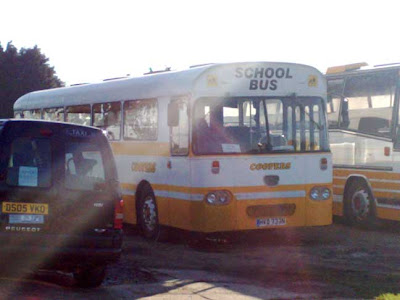 Sadly, the sun was shining into the lens and the photo's needed a fair amount of 'titivation' to bring it to this level. It was C46D from new, though the centre door has long since been removed
Coopers of Killamarsh have an operation in Grimsby, which has a small outstation in the same farm yard used by the Haltham Taxi company. Usually two vehicles are based here and on passing, one was none other than HVD 732N, a Leyland Leopard/Willowbrook in full Coopers livery. Chances are the pupils this stalwart conveys to/from school each day have no idea of the vehicle's history and significance.

If it's the end bay, from where coaches depart, we've not spotted it. The old NX logo was there (arrow-linked circles) the last time we visited.

This bus was an Aplebys bus and wasn't used for around 6 years. Just before Stuart Appleby died a few years ago when he was the manager at Coopers Tours this was brought into the depot by himself obviously being one of his own and i personally scrubbed the whole interior and exterior of this bus myself, all the mold from where it had been stood under tree's for so long and inside full of spider webs. I can still say that the interior has not been touched and is all original as far as i'm aware. Coopers have a number of old buses, for example, leyland olympians, ARP 610X & ARP 611X & DWW 631Y Which was converted to an Open Topper but recently converted back. They also have another decker which i am unsure of the registration i think A546 HAC.