There can be few people who argue that the population of Kent is not high enough. This, however, is the view taken by Go-Ahead Group's chief executive Keith Ludeman, when commenting on how his Southeastern train company's flagship Javelin high-speed service made a loss of £17 million last year, despite generating £33 million in revenue for the first half of this year. 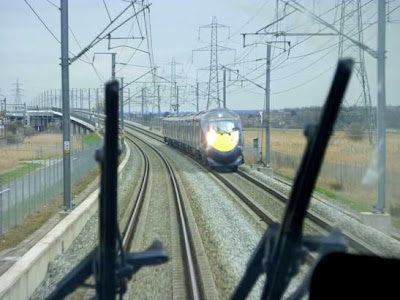 Taken during the LEYTR cab ride. Power is drawn from overhead wires, though once off HS1, the Javelins are powered by a third rail
Go-Ahead's rail commitments here in the UK are operated under the Govia name, in which they are joined by Keolis, the coaching arm of French state-owned railway company, SNCF. Factored into Govia's bid for the Southeastern franchise - with the plans for running domestic services along the under-used High Speed 1 line already well advanced - was a huge housing development in the Thames Gateway, which too was looking fruitful back in 2005, but which hasn't materialised.

The 'cap-and-collar' payments Southeastern is receiving from the DfT is clearly not as high as the company would like, which means "the company’s incentives were heavily skewed towards making cost reductions rather than growing revenue and the marketing budget for the new [HS1] services would be among the areas cut." The South East has been one of the worst-hit areas in the UK for rail commuter travel following the recession that started globally in the autumn of 2008.

The Javelins just aren't busy enough. There are insufficient commuters using them - the view taken by Southeastern, rather than the central London terminus being further away from where most Kent commuters want to be. For someone working in Oxford Street and having to travel by Tube to St. Pancras (in order to catch the 140mph Javelins), the time savings become far less obvious when compared to the same journey by domestic train from Charing Cross or Victoria. 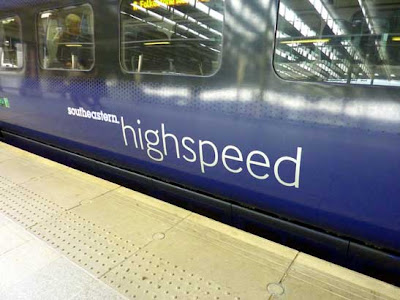 They do travel very fast indeed but for the City commuter, the St. Pancras terminus erodes any time savings as a 20-minute Tube journey is now needed to reach the office
Costs for the high-speed service after subsidy were £50 million, which drowned the £33 million generated through ticket sales. And this is purely for the Javelins along HS1.

The figure is very disappointing and one which has been the main contributor to the operating profit of Go-Ahead's entire rail operation fall by £24 million. The company's two other franchises, Southern and London Midland, have performed in marked contrast from each other, with Southern effectively holding the trio of TOCs together, registering far greater passengers numbers than had been forecast last year when the South Central franchise was being negotiated.

It seems perverse that Southeastern's revenues have fallen so low that it is to choose not to promote travel along HS1 in order to keep costs down. It's like starting a new coach service linking to very popular locations that have a slow, laborious train service that takes twice the time and then not advertising it. Word of mouth only goes so far. Simply hoping for more housing is only part of the solution. Even if this is realised, it seems a little risky to rely on new residents choosing to travel on HS1 simply because they're intrigued by these bullet-like trains that pass near by. 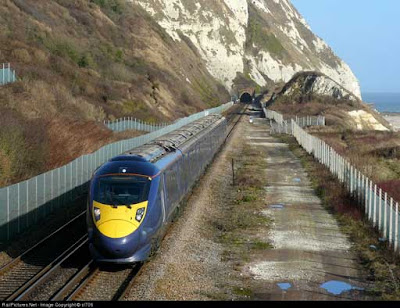 The Javelins run using bi-mode technology. Here the EMU is operating the third-rail power system in Kent, with its pantograph lowered. Photo: Rail Images
It goes to show how tight budgets are for companies running train franchises. Even the big'uns are having a bad time of it. Advertising will always suffer as a result of cost-cutting but it's very unusual to see it removed altogether - especially for a new service with much to give.