Stagecoach of the Skies

I think it's fair to say that Ryanair today receives the same kind of press that bus operator Stagecoach did during the late-90s. Back then, many newspapers jumped on the anti-Stagecoach bandwagon. There was even a special World in Action programme made, which highlighted the company's predatory tactics. Today, things have settled down, as the bus industry has matured somewhat, but the media do enjoy a story when it involves a company which can stir up and divide public option, much as Stagecoach used to (still does?).

Ryainair, the no-frills, low-cost airline very much ticks this box. They've been probed by Panorama which, while less negative than the World in Action piece on Stagecoach, nevertheless permits them to join this contentious elite. Neither of us has flown with the company, though we've undertaken trips by similar airlines to have a pretty good idea what to expect. Ryainair's publicity is so flagrant on account of the company's founder and chief executive, Michael O' Leary - someone not afraid to speak his mind and squeeze every last penny out of his company's business model. 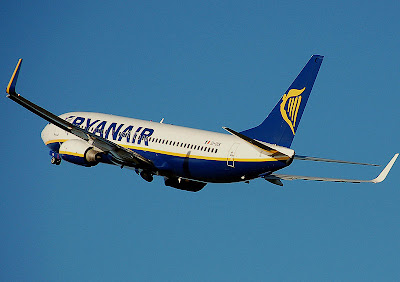 Yesterday, the newspapers reported on an incident on board a Ryanair plane in which a passenger was given tea and biscuits following a suspected heart attack and then charged for the items. The Marseilles-Edinburgh flight saw the 50-year old become ill about an hour in. He was attended to by a couple of passengers with medial backgrounds. For a brief moment, the ill man fell unconscious, though was revived and his diagnosis was deemed less serious to that originally suspected - a heart attack. His wife was then charged for the food and drink used to settle him.

The sad thing is that Ryanair broke no laws. The minimum standards laid down in aviation law in Europe for medical equipment to be carried are just that - very minimal indeed. Blankets and defibrillators are not a requirement. Charges for food and drink receive no regulation whatsoever, and as a consequence, at no point did Ryanair staff break any laws, rules or regulations.

Passenger care and comfort are a top priority for all public transport providers and it is here where Ryanair failed spectacularly. Goodness knows to what level they train their stewards because very few people could look the wife of a sick man in the face and demand money for food likely to prevent his illness from worsening. I remember being in a Virgin XC buffet car on a Voyager during the 2005 LEYTR Railrover and witnessing the chap serving asking a mother, who requested a cup filling with hot water for her baby's bottle, to pay £1.50. Apparently he had to sign for his cups and they all carried a chargeable fee.

The lady had a choice of course. A hungry baby will not usually turn down cold milk. The wife of the ill airline passenger also had a choice, but how many of us, when faced with a request from someone with a medical background to get your loved one a drink and some biscuits, would refuse to on the basis of having to pay?

Importantly, however, the wife of the ill man hasn't been quoted in the media. Eyewitness accounts appear to be the basis on which the story is based. The man and his wife may both have felt the fee very worthwhile under the circumstances.

This type of story makes me feel very uncomfortable, even though no rules etc have been broken. Similar stories in which bus drivers make the papers for refusing to assist passengers in a reasonable manner or train guards enforcing ridiculous restrictions to Off-peak Day Returns, as Arriva introduced for XC last year. It's all in the training, of course, and no criticism has been levied upon Ryanair staff for the manner in which they conducted themselves.

With Ryanair looking at ways in which it can generate additional revenue from charging for toilet use or installing seats in which travellers squat, rather than sit, there are precious few freebies to be had. To quote Michael O' Leary: "At the moment the ice is free, but if we could find a way of targeting a price on it, we would.”

It should be noticed that in 2008, Ryanair was the 7th most admired transport sector company in the UK, beating British Airways.