A total of 90,000 have signed up to become members of the Barclays Cycle Hire scheme in London, which is the brain child of the pro-cycling Mayor, Boris Johnson. The scheme is owned and promoted by Transport for London, though operated under contract by Serco.

Did former Mayor Livingstone appear in cartoon form on any of TfL's publicity?
But how does it work and can anyone just walk up and rent a bike for a few hours? Sadly, to answer the last point first, no they can't; well, not at the moment, anyway.

Initially, membership needs to be made and a credit/debit card linked to each account. A key needs to be paid for and an access fee needs to be selected and paid for: 24 hours, weekly, annually. The key is then posted out and is inserted into the machine located at each docking station by the user, where a daily charge is selected and charged to the account. The daily charges range from 30 minutes up to a maximum of 24 hours. 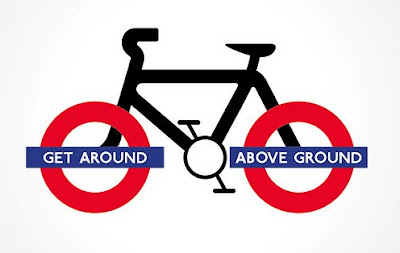 A little long-winded, but understandably necessary considering the nature of the scheme. Charges are made when a bike is damaged, returned late or not returned at all. The maximum charge is pitched slightly higher than the cost of a bike, £300. The daily charges seem to differ violently, from free for a 30-minute period to £50 for a full 24 hours.

To say that the scheme has been very successful would be an understatement. Within a month-and-a-half, the one millionth journey has been made or, more importantly for TfL, paid for. This must bring considerable relief to Mayor Johnson, whose personal championing of the pedal cycle
has been inextricably entwined with his entire career. I'd argue that Boris would consider the very public termination of the new Routemaster more of a valid sacrifice than that of his cycling scheme. 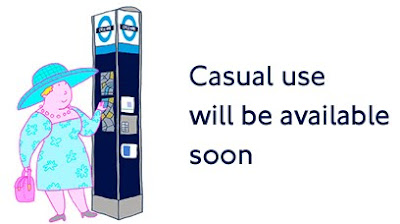 Someone ought to inform the lady pictured that her attire is ill-suited to riding a bike
The scheme has been given more than its fair share of publicity, though. DJ Edith Bowman and The X Factor 'referee' Dermot O' Leary have been signed up to star in a short film showing how straightforward the Barclays Cycle Hire scheme is. When is the last time a C-list celebrity lent their name to promoting the bus industry? Would one, for example, give the New Bus for London a helping hand on its way?

To be fair, the Barclays Cycle Hire scheme is one of the first of its kind here in the UK and accordingly an especially large push was needed to try and imprint it in as many people's minds as possible. Casual users (non-members) cannot make use of the scheme without first registering, which would appear to restrict the scheme's popularity somewhat. That said, it's best that teething troubles are ironed out before the free-for-all ensues. There have been teething troubles, too. The biggest problem fellow bloggers have reported is the non-availability of bikes where they are needed and the excessive numbers at docking stations - so many that cyclists are having to travel well beyond their intended destinations to find a docking station at which to leave their bike. 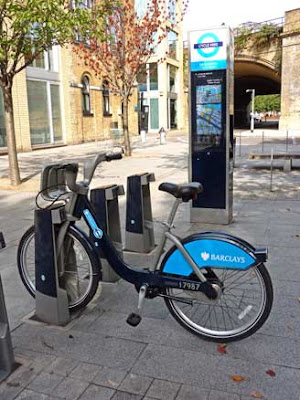 A nice touch is the ID number of each bike being in the standard TfL font displayed on buses and Tube trains, New Johnston
While TfL and Serco have identified the likely hotspots around peak periods, the scheme's success appears to have exasperated matters. More bikes are being constructed every month, initially in preparation for the scheme's expansion for non-members, but more recently they've been used to satisfy demand. Serco has been inundated with requests for bikes at docking stations and has found positioning them accordingly a full-time job.

While TfL is keeping details of thefts and damage under wraps for the time being, the docking stations that we encountered last month seemed in good repair and a few bikes were available in each. With one million journeys being recorded in such a short space of time, genuine modal shift may well be taking place. Trouble is, though, how many are leaving the buses, trains and Tube rather than their cars? So few people travel by car into central London, that a real concern for TfL here must be that a noticeable drop in peak travel figures may be recorded very soon indeed. On the buses at least, this may help justify service cuts to meet the very stringent demands of its reduced budget.

"Within a month-and-a-half, the one millionth journey has been made or, more importantly for TfL, paid for."

I'd be amazed if it's not running at an eye-watering subsidy, given that most people will be aiming at the free ride 30 minute period. It's actually got quite serious structural flaws as a transport scheme, not least that people keep trying to use it for purposes it wasn't designed for, like replacing tube/bus journeys into town from railway termini. That this is *because* it's essentially free once you've paid £45 a year seems fairly obvious to me, what Boris has done is price people off buses onto a more subsidised form of transport, which doesn't strike me as something to celebrate.

Also, a million journeys sounds a lot, but the Tube carries three million a day on *average*, including weekends, which rather puts it into perspective.

I think you're slightly confused about the 'daily' charges. After you've paid for your access period, the usage charges are per trip, not 'daily'.

TfL has priced them to encourage short trips, which are what the scheme is designed for, and to strongly discourage taking a bike out for long periods, which is not what it's about at all.

If you want to take 20 or more trips in a day, all less than half an hour, you'll have to wait 5 minutes between each one but they'll all be free.

Zone 1's not that big anyway - with a following wind you can get from top to bottom in less than 30 minutes, and from one side to the other in not much over half an hour. Why would you want to keep a bike out for any longer?

I'm with Tom on the commuting thing - but Serco seem to be managing some hot spots better.

btw, 30 July to mid October is two and a half months.

If we're talking bikes its probably worth mentioning something closer to home - Nottinghams Ucycle.

Its students only unfortunately, but for £49 (+£100 refundable deposit) students can hire a bike for the whole academic year. They get to take it home too! Although the renter has to maintain it themselves - but discount vouchers are available.

Re: daily charge. Yes, we didn't make it clear. We tried to illustrate the point that a charge is required after membership, and after having chosen the access charge. There would of course only be one charge if a bike was used for just one journey per day, but with commuters using them to commute, two charges would seem likely per person per day.