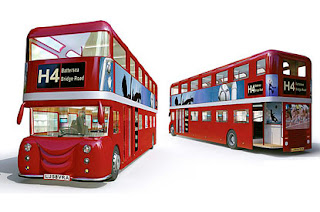 London's Evening Standard reveals the second serious Routemaster design since the competition to design a modern-day version to operate along London's streets was closed.

"A RADICAL new Routemaster-style bus for London is revealed today with a "smile" at the front, U-shaped seating and television screens. The H4 is one of several entries for Boris Johnson's design competition to find a new version of the traditional bus.

The Mayor has pledged to get rid of largely unpopular bendy buses and replace them with "a modern Routemaster for the 21st century". A team of 10 designers in London and Nanjing, China, spent more than a month designing a model that would combine the best elements of the classic hop on, hop off vehicle with the latest technology.

Guy Middleton, managing director of H4, which has also revamped the Royal Festival Hall and office complexes in Dubai, said: "The first thing you notice is the smile at the front. It's just a small touch we added to make the bus more pleasing to ride. "We have centred the driver's cab, which would not only improve his peripheral vision but also make the buses easier to export to other countries."

The upper and lower deck have TV screens visible to each passenger as well as air-conditioning and heating. Mr Middleton added: "The TV screens are a possible revenue earner, as they could advertise local businesses close to where people are alighting, as well as flash the latest headlines and travel information. The U-shaped seating will create more leg room for passengers, and there will be just one unobstructed aisle on each deck which will benefit the conductor.

"We also feel that anti-social behaviour would decrease when people are facing each other."

The bus would have full disabled access and the seats would be made with a flexible mesh that does not collect dust or dirt. Last week, a glass-roofed Routemaster designed by Foster & Partners was revealed, promising to give passengers an uninterrupted view of the capital.

But Mr Middleton said a glass roof would cause too many problems. "It would make the upper deck unbearably hot in the summer, while it could steam up and even drip in the winter. What we've come up with is a cost effective and very sleek Routemaster and we want to win it.""

The wheel-base of the new H4 looks particularly lengthy and could have an impact on its manoeuvrability. A centred driving position sounds interesting, though to do so primarily to make their retirement to other countries seems a little mis-guided and facing seats might curb anti-social behaviour but they also signal the green light for people to place their feet on the seat covers. The 'smile' at the front is a nice touch though. Is the H4 a serious contender for the chosen RM replacement, or will Alexander Dennis scoop the contract purely because it's one of the few bus manufacturers that have shown an interest?
Posted by LEYTR