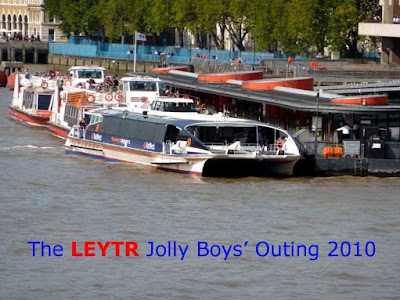 I'd never taken a trip along the River Thames before, through the heart of London. It seems a little odd, really, considering the many other (surely 'rather dubious'? - m'colleague) transport modes on which I've travelled. That was all to change on Wednesday, as part of the LEYTR's Jolly Boys' Outing to London (much of which is, regettably, totally un-bloggable).

I'd seen these Natwest-emblazoned skinny vessels chugging along the Thames on numerous occasions, but dismissed them as being part of the 'costly tourist' operations. As it turns out, they are anything but. Set up as recently as 1999, a partnership of two wanted to offer a reliable commuter service along the Thames, making the most of the relative linear operation vessels can provide here and, rather more obviously, the massive time savings to be had, especially for those wanting to travel between locations whose hinterland is the Thames.

There are a total of thirteen vessels in the Thames Clipper fleet, the newest being six catamarans working the main service, all built in 2007/8. They are each named: Cyclone, Monsoon, Tornado, Typhoon, Aurora and Meteor. Each seats 220 soles. They were purchased following the original partnership selling the business the year before to the company who now owns the Millennium Dome, or O2 Arena as it's now called, Anschutz Entertainment Group. 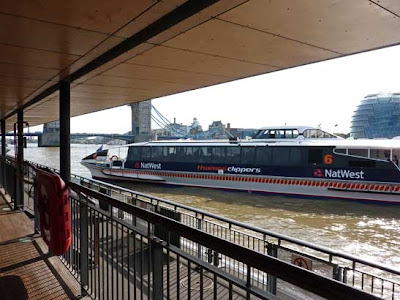 Our Thames Clipper catamaran prepares to dock at Tower Pier. It bares fleet number 6. We assume this to be the last of its 2007 order for 6 new vessels that now operates the main service
The catamarans are very spacious, with the vast majority of seating undercover with darkened windows. A small number of seats (about two dozen) are located to the rear of the craft, as too is a small bike storage area. With Wednesday's weather in central London being unseasonably warm, we all headed aft. Photography is also far better from this area as the darkened windows within the main seating area will affect the exposures.

We didn't sample the full route, however, which operates between Embankment and the O2 Arena (Embankment Pier and the QEII Pier) with nine intermediate calling points. During the morning peak and throughout the evening, services extend further east of the QEII Pier to/from Woolwich Arsenal. For the remainder of the day (0930-1750), services terminate at the QEII Pier. This proves very popular with commuters working in Woolwich and also from those in Woolwich needing to head further into the City. Favour has also been found with the on-board Wi-Fi that is currently offered on the six 'mainline' catamarans.

Three other limited services are provided by the Thames Clipper: the Tate to Tate service, which links Millbank Pier with Bankside Pier; The O2 Express, a direct Embankment-O2 Arena service, calling only at London Bridge; and the Hilton Ferry service, which connects Hilton Docklands Pier with the main service at Canary Wharf. The network map shares similar attributes to that of the diagrammatic London Underground map, with connecting Tube lines shown at each calling point.

I'm sure Harry Beck could have improved on the latest Thames Clipper map, but even so, its attempt to show integration with land-based public transport is very pleasing to see
There are a number of ticket options to consider. So vast and pointed are their products, it's probably best to simply direct you to their website. One-way tickets are catered for, with reductions for Oyster card, Travelcard and Freedom Pass Holders. Children receive discounts too. The same discounts/reductions apply to unlimited travel tickets and also tickets that permit cross-Thames travel since piers at which the service calls can be located on either side of the Thames and the Thames Clipper can be utilised as a handy way to cross the Thames where no other method exists.

We boarded at the Tower Bridge Pier and were initially delayed by a family in front of us who were struggling to receive a child fare for their youngster. The lady serving kept asking for his Oyster card, and seemed disinterested when told they were tourists who'd not travelled by public transport in London. Communication was very poor indeed. I even attempted to intervene, politely telling the lady serving that it was wrong to assume every child tourist is in possession of a visitor/PAYG Oyster card (which would confirm their age). Their child had no other form of ID since he was still at school. Besides, if he did, it wouldn't have been his immediate thought when visiting London to take his school library card (that's assuming it stated his DoB in any case). The lady selling tickets was actually going to call someone about it. Deary me. However, commonsense prevailed and she relented in the end, having seen the growing queue. 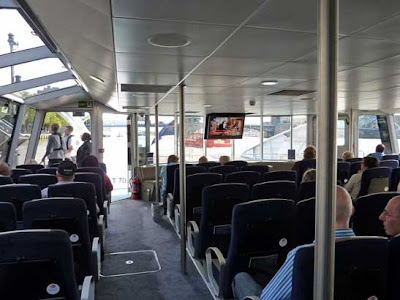 The average age aboard the Clipper on which we travelled would suggest few paid the full adult fare. Operating under licence to TfL, the Thames Clipper offers the full range of discounts available to all other passenger transport modes in London
The Thames Clipper service operates to a 20-minute frequency and our trip would take 26 minutes to the easternmost terminus. The frequencies are what you'd expect of a bus service in a moderately-sized town. A 30-min frequency from 0600 to 0730 and then every 20 minutes throughout the day until 1900 when the service reverts to half-hourly before a last departure from Woolwich Arsenal at 2300/Embankment at 2358.

We were all travelling with Travelcards, so received a 33% reduction and paid £3.55 for a single fare. One of our contingent had a staff Oyster card, but received the same reduction. As we left Tower Pier, progress was most definitely leisurely, though this was by no means a problem. But, once under Tower Bridge and past the next police pier, an announcement was made that the service would increase in speed and that those at the back should be aware of excess spray. With that we literally shot off and within second our GPS equipment recorded us travelling at 31mph. 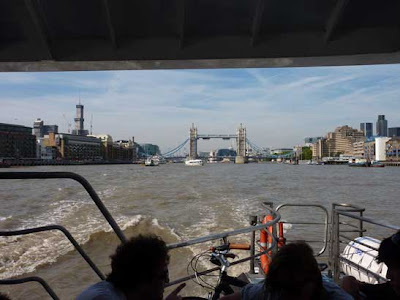 We were soon to increase speed, about half-a-mile east of Tower Bridge
I was amazed by how responsive the catamarans were. They'd literally dart from one side of the Thames to the other, depending on which side the next pier was located. A fair few were using the service on a hop-on, hop-off basis, but the majority disembarked at Greenwich Pier (the penultimate stop at this time of day).

The amount of spray did make photography a little challenging. You had to time it right with the wind! That said, with temperatures forecast to be in the mid-20s today, it was a very nice place to be. I could imagine stood here being a little fraught in much poorer conditions. The iconic London Transport roundel was in evidence at all the piers, with the Thames Clipper operating under contract to Transport for London. It was only last year that they began offering payment through Oyster PAYG.

Braking, if such a thing is possible on board a vessel, seemed very strong indeed. We assumed the vehicles are simply put in reverse to slow them down. If this is the case, reverse is certainly engaged fully at very high speeds. It does make them very responsive. The disembarkation process at each pier differs slightly, with announcements made directing those leaving through which exit they can do so. A fair number of staff feature on each vessel, ensuring ropes are tightened upon docking and at less busy times when few are on board, we witnessed a couple on litter patrol.

The long-term aspiration by the Thames Clipper's owner is to expand services and to gain additional patronage so that prices can be reduced, making them cheaper than alternative modes of public transport. Those opposing this move cite the possible end to tailored tourist boats along the Thames as a result of the shrinking prices, and a 'free-for-all' on the river. The market is somewhat limited, though, surely. Even from my very limited experience, it's plain for all to see that growth will never rival what, say, Stagecoach has achieved in Cambridge. The Thames, for example, does not go to King's Cross! 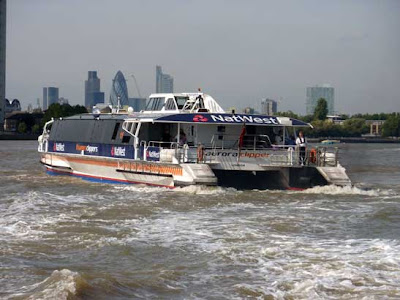 Our Clipper was occupying this pier so a westbound service chose to tread water until we left and then reversed onto it. Very impressive. Even buses don't (usually) do this
It is precisely because of the perceived cost, that I've never, ever considered tourist boat tours of the Thames - the Thames Clipper included. Now I have, and seen that for £8 as a holder of a Travelcard I could have unlimited travel aboard the Thames Clipper all day, I'll most certainly bare it in mind for future visits. Tourist boat tours should surely improve their game. This is competition after all. Why should it be any different on water?