The Germans are coming

Next Tuesday will be a momentous day in the history of British Railways, for then the first ever German train will pull into London St. Pancras International station, having travelled from Germany via the Channel Tunnel while undertaking test runs for a proposed Anglo-German train service by 2013.

Built by German-based Siemens, the ICE-3 train, is the latest design to leave the manufacturer's HQ and is also the first non-French built train to operate through the Channel Tunnel. Eurostar's Class 373s being of French manufacture (Alstrom) and along HS1, Southeastern's Class 395 Javelins having a Japanese origin (Hitatchi).

However, the ICE-3's journey, operated by DB Schenker, commenced last Wednesday. Then, the train operated through Belgium and France where it entered the Channel Tunnel at 18mph, while mechanics and other technical officials monitored the train's progress. Once inside the tunnel, the train stopped and reversed back into France after a reported 10 minutes. 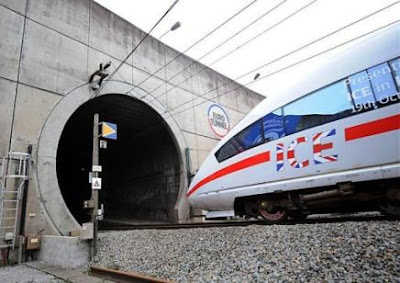 The ICE train enters the Channel Tunnel from France on Wednesday
One of the sticking points encountered and hopefully to be overcome, is the length of the train (200m) being about half that of a standard Eurostar set (400m). The problem concerns the nearest emergency exit within the Tunnel in case of evacuation. With Eurostar's '373s' being so lengthy, at either end of the train evacuees will not need to walk more than a few yards to reach an exit. With the ICE-3 being half the length of a '373' the walking distance increases considerably.

This is likely to be put to the test over Saturday night when we understand the Tunnel will be used to test evacuation processes and other safety procedures that are a mandatory requirement when under the English Channel. The train is expected to be hauled to London St. Pancras on Tuesday, where an invited audience will be able to witness its arrival. We believe the train will be stabled there overnight to attract as much publicity as possible, before returning to Germany the following day (20 October).

The ICE-3 test is two-fold: the Alstrom-built Eurostar '373s' are due to be replaced soon. These stalwarts, based on the French TGV model, are past their best and the condition of the exteriors does the ambiance within no favours at all!! Siemens hopes that in addition to DB Schenker purchasing similar examples for planned Frankfurt trains by 2013, it will receive an order from Eurostar to replace its '373s' using two ICEs coupled together, which would rival the total length of today's '373s' operated by Eurostar (400m) and thus overcome the length issue.

DB Schenker, who would operate any trains operating an Anglo-German route, has additionally expressed an interest in operating services to/from the London Olympics, although we've since heard that if this was to occur, services would not call at Stratford International as the station has been deemed too small for all but Southeastern's dedicated shuttle service.

It is a fascinating time. For too long one company has had the sole right to operate along HS1 and through the Channel Tunnel. Opening the route within the UK to Southeastern did not affect Eurostar since journeys within England are not permitted on its services. While DB Schenker has shown no appetite to operate competing trains to/from Paris, it does intend to serve Germany, its own country of origin, and with more destinations from which to choose, Paris and Brussels may proportionately lose out.

London-Frankfurt is one such journey being considered by DB Schenker, which it hopes to operate by 2013. With German efficiency being as it is, could an earlier start date be considered? The bureaucracy concerning passage through the Channel Tunnel has made the news lately, being cited as a major hurdle. Many believe this to be the French simply stalling. Undoubtedly, the whole process would be far simpler if the Channel Tunnel linked England with Belgium.

*UPDATE* From Justin: The ICE4 Class 407 will be the train DB Schenker will operate through the Channel Tunnel. The timetable for services to Germany will be revealed on 19th October when the ICE3 arrives at St. Pancras.

*UPDATE* From Fred: The Eurotunnel shuttle locomotives and the Class 92 freight locos were built in the UK by Brush. The Class 373s are not being replaced yet, indeed Eurostar has just announced a refurbishment valued at around EUR100m. The recently-announced Eurostar Velaros (ICE is a DB brand) will be in addition to the 373s.

LEYTR Update: It seems that Brush-built Class 319s have indeed passed through the Channel Tunnel. The following from Wikipedia:

319s went in the Chunnel before

The Eurotunnel shuttle locomotives and the Class 92 freight locos were built in the UK by Brush.

The Class 373s are not being replaced yet, indeed Eurostar has just announced a refurbishment valued at around EUR100m. The recently-announced Eurostar Velaros (ICE is a DB brand) will be in addition to the 373s.