'HQ' is Grimsby, the locality where it all began in 1963. The LEYTR's home town, that is. 47 years ago our publication started life as merely the Lincolnshire Transport Review, though grew in size to now cover what was known as Humberside in addition to the shire county.

I made a visit to HQ today and in so doing photographed a couple of items that I thought would be interesting to view on the blog. The first is of a bus stop flag that can be found stuck to a street light along Oxford Street in the town: 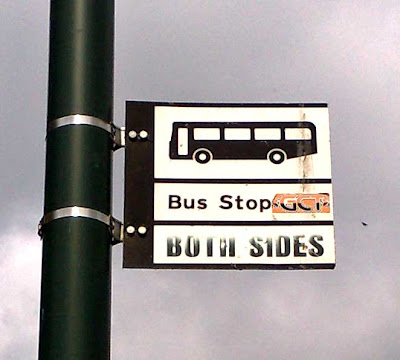 It's particularly unique for a number of reasons. Firstly, that it still bears the logo of the erstwhile Grimsby-Cleethorpes Transport Company Limited (GCT), the municipal undertaking that sold to Stagecoach Holdings plc during November 1993 - it was the first municipal purchased by Brian Souter's limited company (the company had only just floated on the stock exchange at that time).

The reason this bus stop flag was never treated to a Stagecoach sticker, covering a logo which represents the nasty excesses of the public sector (if the theme of the recent Emergency Budget is to be believed) lies in the second reason regarding the flag's uniqueness: no bus has called here since 2001.

For it was then that the only service to operate along Oxford Street in Grimsby was withdrawn, following the loss of funding from North East Lincolnshire Council. Service 14 was the route, which operated latterly on Tuesdays and Fridays only, linking the Belvoir Park Estate in Cleethorpes with Grimsby Town Centre via a circuitous route that mirrored much of the former Service 12. 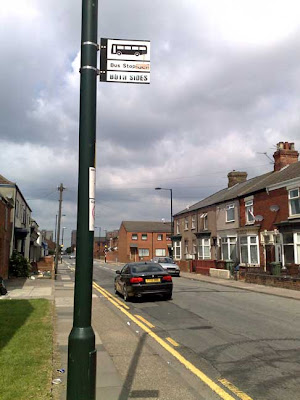 The third oddity about this flag is that it was the only one of its kind ever to be attached to a pole by GCT. Their standard bus stop flags looked totally different. This one was of the design used by Humberside County Council for its more rural outposts - outposts that GCT never served, being the preserve of Lincolnshire RoadCar (remember them?).

Who'd've thought a seemingly innocuous bus stop flag could have so many interesting facets to its history! Similar to Railway Eye's 'Railway Garden Competition', we've thought of introducing our very own equivalent, though based on bus stops that no longer serve any purpose whatsoever: the LEYTR's Bus Stops that Time Forgot

We've got a couple in our recent archive we could blow the dust off and upload, though if anyone would like to send in any bus stops that fit the same theme as that above, offering us as much information as possible, we'd gladly upload it.

The second photo was taken that the town's local hospital, named after the late Diana, Princess of Wales. 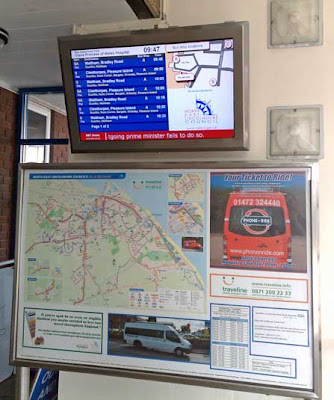 It all looks very technological. The local authority has enlarged its FWT-designed transport map of the area and placed it in a frame and above is a 'next bus' departure screen, that shows a list of pending departures. Next to it on the screen is a section that must be linked to GPS as it shows your locality within a square half-mile. It looks very good indeed, and boasts the local authority's logo everywhere.

UPDATE from "Tommo": Grimsby bus station could have the facility for a next bus screen but it is simply not operational. I refer to a strikingly similar screen as that shown at the local hospital, which is situated at the exit to the shopping centre, Freshney Place, but which has never worked.