Announced last year, following the Coalition Government's Comprehensive Spending Review, was that Bus Service Operators Grant (BSOG) would be reduced by 20% from April 2012, while at the same time CSOG would be abolished altogether. We mused as to what CSOG was, and unusually, didn't receive any response from our readership.

Things were made a little clearer last week, when we were sent two emails, both written by National Express. The first has been sent to anyone who has a registered email address with them and who is aged 60 or over; the second has been sent to its third party operators. The subject matter is identical, though appropriately worded in each case. 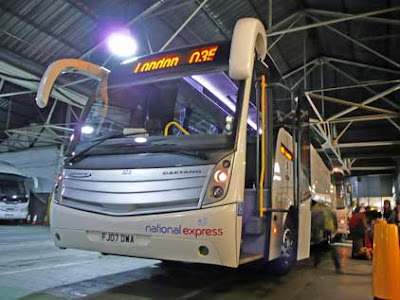 Seen in Victoria Coach Station Arrivals is a Transdev Levante from Bournemouth. NX Service 035 sees around 22 miles of its 113-mile London-Poole timetable registered as a local bus service (Poole-Ringwood & Hammersmith-Victoria)

Coach Service Operators Grant (CSOG) will be completely withdrawn from the end of October. Unlike BSOG, this offers coach operators recompense through providing a concessionary travel scheme, where 50% off the adult fare is offered. £17.5 million was awarded all qualifying operators during the last financial year, £15 million of it being claimed by National Express. The Oxford Tube (Stagecoach), Oxford Espress (Oxford City/Go Ahead), Bakers Dolphin and Berrys Coaches were the other recipients.

National Express suggests its passengers should lobby their MPs so that they write a letter to the Transport Minister in charge of this subsidy. But Theresa Villiers sounded resolute: "The coach industry may wish to continue this offer on a commercial basis, but the Government has decided that the limited funds the taxpayers can afford should be used to support schemes such as the statutory national concession [free bus pass]."

Turn the clock back a decade and the 50% reduction in coach travel for over-60s didn't exist. Taking National Express as an example, the company offered its Advantage 50 scheme, which paralleled that of a Senior Railcard on the railway. A one-off annual fee is paid and anyone aged 50 or over could receive a reduction of 33% in coach travel. Its complete removal in 2004 caused anger to those aged 50-59 who then received no reduction in travel at all.

While patronage for coach travel isn't rising to the tune of 6% being seen on the trains, growth is still there and clearly National Express is concerned this could cause stagnation or even decline. Be clear - OAPs account for a very sizeable proportion of its passenger base.

However, what neither NX's public nor in-house emails detail was the angle printed in this week's routeone magazine. Rather than CSOG be withdrawn with no alternative offer from the DfT, what is actually happening is that government is planning to withdraw *all* BSOG payments to coach operators who participate in the CSOG scheme. 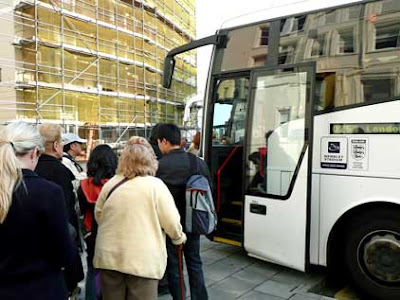 NX Service 025 operates between Brighton and London and every single one of its 56 miles is registered as a local bus service, with 80% of the fuel duty reclaimed (64% from April 2012).

National Express et al are allowing their CSOG revenue to be withdrawn so that they can hang onto the greater subsidy - that of claiming 64% of the duty back on all the diesel they use to fuel their coaches from next April (80% today). The company registers all the sections it can that fall into the local bus service category (coach stopping points that are up to 15 miles apart see that section qualify as a 'local bus' and BSOG can be paid). Initially they also had to accept the free bus passes, but that was removed when the loophole was closed in 2008.

LEYTR Comment: The removal of half-fare coach travel is a blow and will see fewer journeys by coach. Not too many though. Over-60s have a fair amount of disposable income and many swear blind by coach travel. And let's not forget just how affordable coach travel is - never more so than when compared to the train!

To suggest it will offer nothing when its CSOG payments cease at the end of October is rather churlish, though NX will be hoping for some form of last-minute concession from the DfT if it can get those who will suffer financially to lobby effectively. It was discussed on Wednesday's Jeremy Vine Show on BBC Radio 2! We're not at all sure NX will get its own way, if Ms Villiers' comments are anything to go by. The wording in this week's routeone implies that all NX has to do is forgo its BSOG payments and it can continue to receive £15 million towards the half-fare scheme it offers over-60s.

But it won't do that - the awkward truth being that it values its duty rebate more than it does offering a reduction to over-60s. The company will rightly argue that BSOG helps it keep its fares at the level they are and by removing this element in favour of retaining half-fare for the over-60s would see everyone affected with fares increases across the board.

There is one company missing from that list! MEGABUS: I do see some over 60s use megabus service.

I get the feeling that NE days will soon be numbered and Megabus expanding even further.

some of the NX route are just strange.

Megabus do not claim CSOG as they do not register their services, so cannot claim BSOG. Therefore they can charge whatever they like for people aged 60+ or with disabilities. The other advantage is that they do not have to give 56 days' notice to alter, cancel or introduce new services.

I can say I have found Megabus to be cheaper than NX, even when passenger don't have tickets at London vic station.....##

Many of the fares can actually be cheaper, if there had a special price.