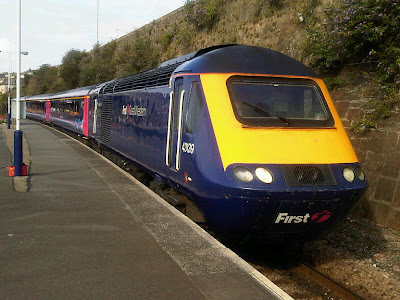 Morning broke at 0844 when our First Great Western service to London Paddington left Penzance. At the helm was 43139 that was named after Driver Stan Martin who was tragically killed when his train collided with a car on a level crossing on 6 November 2004. At the rear was 43070 The Corps of Royal Electrical and Mechanical Engineers. Travelling in/out of Cornwall by train is something I've done only once before. It is a wonderful experience. While the speed isn't what you'd expect from a HST, the views and ridiculously high viaducts are no less impressive second time round. Although travel yesterday aboard the Voyager was pleasant, it was very noticeably how more enjoyable it was in a leather-seated mk3 carriage. 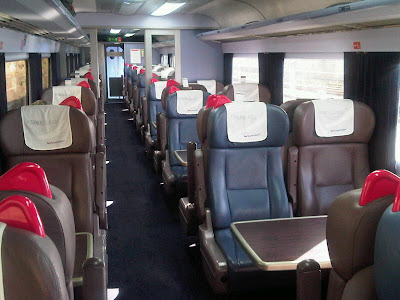 A mini crisis took hold at Exeter when the hot water boiler failed. We were held at Exeter for 5 minutes while an engineer looked at it but to no avail. This journey heralded my favourite guard announcement of the journey so far: "If you're leaving the train here please ensure you're alighting onto a platform."

Despite the slight delay at Exeter we made good time travelling non-stop to Reading, arriving only one minute late. We didn't have long at Reading so headed to Platform 4A where our next service was loading. 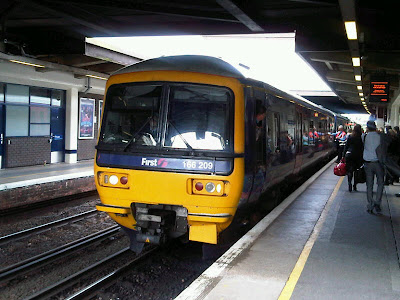 First Great Western operate from here to Gatwick Airport every hour and we were aboard its 1334 departure, formed by 166209. The journey was, quite frankly, rather boring when compared to what we've been used to. But it was very punctual and we arrived at Gatwick Airport on time. I had a mini crisis of my own here when I realised some time after we alighted that I'd left a bag on board. I was so lucky for a number of reasons, not least that the service travelled to some sidings for 10 minutes before forming the 1503 return journey from the same platform, so I was able to acquire said bag from the driver trainer at the front. 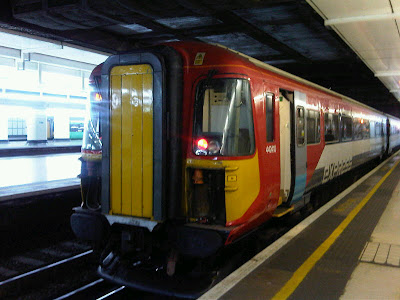 The reason for the run to Gatwick Airport was to try and bag a Class 460 Juniper on the Gatwick Express to London Victoria. It, however, was not to be as the one I scheduled us to travel on was a pair of 'plastic pigs', Wessex Electric Class 442s (442421+442410). I rather enjoyed them and had never travelled on one before, though m'colleague assured me they'd been extensively refurbished. He also commented that a '442' holds the fastest speed of a third-rail train, at 109mph.

A very efficient and speedy trip into London and half-an-hour later we were at Victoria. We jumped on the Tube to get to Euston as we were booked on the 1630 Virign Trains 'crack express' to Glasgow Central in their record-breaking journey time of 4:08. This necessitated my first trip on the 2009 Stock, now the sole occupier of the Victoria Line, relieving the remaining 1967 Stock last month. I didn't catch the fleet number!!

Our super-fast Virgin Trains departure at 1630 was formed by 390052 Virgin Knight that carries the name of Alison Walters on the train fronts. We took our seats and at precisely 1630 (and I do mean precisely!) we glided out of Platform 13. Progress was as per the running schedule until an emergency brake application between Hanslope Junction and Weedon. Although it was an emergency brake application, no one came out of their seat and no luggage fell from anywhere in our carriage. Sadly, there we sat for a very long time. 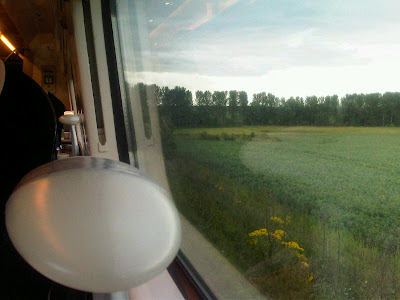 The 1630 Euston-Piccadilly struck what we now understand to be the overhead power equipment which caused it to blow its circuit breakers but this was later changed to the train brought the overhead wires down. We were the second in line as the 1623 Euston-Wolverhampton was between us both. We were the lucky ones as we didn't lose power and after a considerable length of time undertook a wrong direction move back along the Down Main to Hanslope Junction, where we headed via the diversionary route through Northampton. Once we rejoined the WCML at Hillmorton Junction, it was 1908, not the booked passing time of 1716. We ran just under 2 hours late through to Preston, with an unscheduled stop at Warrington Bank Quay so the London-based driver could return to London. 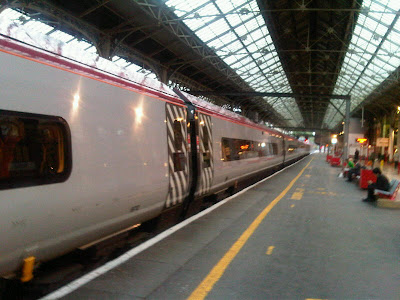 Sadly, a decision was made to terminate our train at Preston and the relief train crew were no longer available. Clearly a decision had been made to schedule this crew to relieve a train that was not as severely delayed as us and, in the cold harsh light of day, it was the right call.

We pulled into Preston a rather impressive 2 hours and 2 minutes late at 2032. 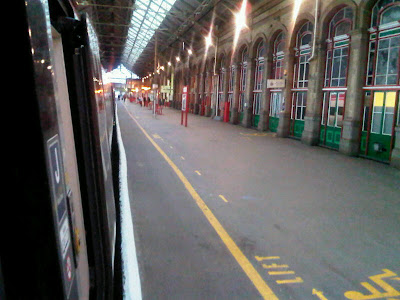 As luck would have it the 1757 Euston-Glasgow pulled onto Platform 3 at 2039 and departed at 2047, with a scheduled arrival time in Glasgow at 2257, precisely 2 hours 19 minutes after our booked arrival. It is 390005 City of Wolverhampton. I'm typing this blog entry up while on this final train - we've just passed the Shap summit (916 feet about sea level, after a 1:75 approach gradient from Tebay).

Thanks to Twitter, Virgin Trains contacted me to say the overhead line problem is suspected vandalism. We understand the 1623 bound for Wolverhampton had to be rescued by a Class 57 and ran almost 200 minutes late. Everything considered, Virgin handled the situation impeccably. Announcements, while taking 5 or 6 minutes to come initially, became regular and contained the 'human' touch - the weren't sterile and emotionless. Forms were handed out for passengers to complete which would be passed to customer relations for their consideration on some form of remuneration. Certainly in my carriage there were no complaints, even when the guard very bravely announced our delay was likely to be around two hours.

There are no complaints from us about the way the incident was handled, though obviously our severely delayed arrival was a clear inconvenience. It is, hand on heart, the only delay in excess of five minutes we've had for the entire jaunt so far.

We get a lie in tomorrow, before heading south and plan to bravely deviate from our itinerary.

I am fairly sure I have read that a 4 REP unit (they donated their traction motors to the 5 PIG - I mean 5 WES class) exceeded 110 mph on tests in the 70s - obviously the record keeping on those occasions did not comply with 'world record' standards.

These tests were when consideration was being given to increasing the line / unit limit to 100 MPH on sections of the main line.

I timed (stopwatch and mileposts method) a 4 REP / 8TC combination at 102 MPH on a delayed Bournemouth - Waterloo journey on one occasion - despite the official limit being kept at 90...