The oldest Tube trains running on the London Underground network will have been withdrawn by the end of next month. Built in 1967, the stock of the same name has been plying its trade along the Victoria Line since new. It is being replaced by brand new 2009 stock and a line restriction north of Seven Sisters means that the last examples of 1967 stock to work end-to-end will do so on 27 May. 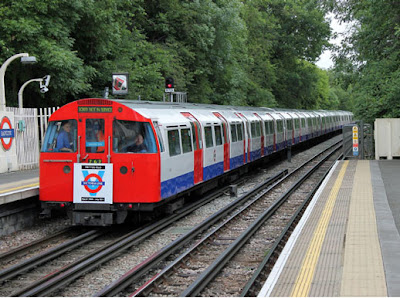 A recent Farewell to the '67 Stock journey was arranged and the unusual sight of seeing it pass through Eastcote (along with other stops on the Piccadilly Line) is seen here. Note the special headboard. (Photo: Bowroaduk)
Built by Metro-Cammell for use on the Victoria Line when it opened in the same year, the trains comprise two four-car units, making them some of the longest Tube trains on the network. 316 units were built for London Underground, equating to 39-and-a-half trains. They underwent their first refurbishment at Rosyth Royal Dockyard between 1991-5 and today, by no means do they look the most antiquated trains on the network.

During the '90s refurbishment, withdrawn sections of mk1 1972 stock were used to increase the number of 1967 stock used on the Victoria Line, being inserted into the centre sections of each train set. This increased the number of complete eight-car sets from 39.5 to a more rounded 43. These additional cars had operated the Northern Line for many years. 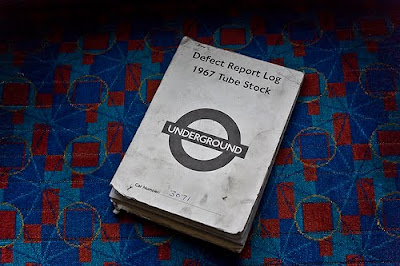 (Photo: Trowbridge Estate)
The Victoria Line uses ATO (automatic train operation), which sees the driver's responsibility for the overall safety of the train maintained, but otherwise he is a very well-paid door operative. The former 1972 stock elements of the trains were not fitted with ATO and this is why they were inserted into the centre of each unit. 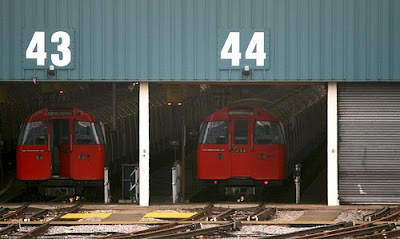 The depot at Northumberland Park is the only point the trains operate above ground. Seen here are a pair of Metro-Cammells dating back to 1967. (Photo: Bluey-Birdy)
The 43 trainsets are being replaced by 47 examples of the new 2009 stock, the first being introduced in July of that year and completion is expected by July. These new trains are being constructed in Derby by Bombardier Transportation and are part of the Movia family. Replacement of the 1967 stock has been at a pace, with only 9 examples believed to be currently operating on the Victoria Line. The signalling required to operate the 1967 stock is expected to be decommissioned during July.

The new 2009 stock is being constructed as 94 four-car units, comprising the 47 eight-car trainsets and one has entered service every fortnight since February 2010. They will seat 252 and accommodate 1196 standees, which, similar to the new S-Stock, replacing A-Stock on the Metropolitan Line, is a step in the wrong direction for anyone wanting to sit down, as an eight-car trainset of 1967 stock seats an additional 52 people though London Underground claim they would accommodate precisely 52 fewer standees than the new 2009 stock. Overall capacity, then, is constant, but I sure know which way round I would prefer! Transport for London's own publicity claims there is a 19% increase in capacity with the 2009 stock, but this may refer purely to standees (and omit the same reduction in seated passengers). 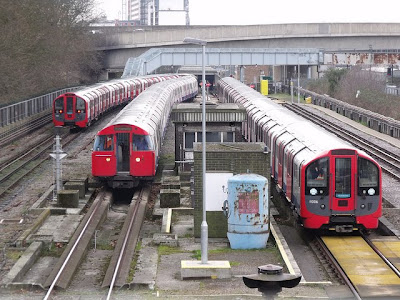 Side by side. 2009 stock surround a lone example of 1967 stock. The outgoing stalward trainsets are being taken to Rotherham for scrap. (Photo: Christopherfitzgerald1994)
The Victoria Line's track gauge is the same as that found elsewhere on the LU network, however the line's loading gauge is 1.6 inches (40mm) wider. With the 1967 stock this means very little other than the infamous gap to mind can be more noticeable on this route (are the tunnels a shade wider?), but the new 2009 stock has been built to the more generous loading gauge and consequently cannot be driven elsewhere on the network. Chances are, if you've overtaken a Tube train on the back of a lorry using the M1 it is headed for the Victoria Line (the new S-Stock is being transported by rail from Derby).

Victoria Line trains have always comprised 8 cars and with this continuing (the 2009 stock sees each car able to be uncoupled from the next, to ease loading onto road transport) they will be the longest trains on the network, coming in at 437ft 25in (133.275m), which is 9ft 8in (3m) longer than the 1967 stock. They just fit the platforms! That is until the S-Stock is fully in service on the Metropolitan Line, which will then take the crown for longest trains.

Like any modern train worth its salt, regenerative braking is employed, meaning the heat lost when braking occurs is effectively recycled, being captured and ploughed back into the track. You shouldn't feel the sudden gust of hot air when one enters the station. The units comprise an A Car (driving motor), B Car (trailer), C Car (non-driving motor) and D Car (uncoupling non-driving motor). The next unit is then attached with D Cars connecting. 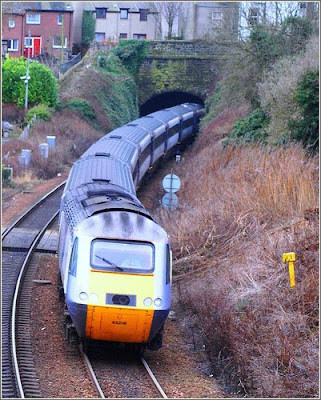 They were first introduced in 1976 and this year sees their 35th anniversary. They've had more mid-life refurbishments than you can shake a stick at. Another nine years and they'll be as old as the 1967 stock that is being replaced, except these will have covered many million miles more. (Photo: Dave Forbes)
There aren't many trains running in every day service here in the UK that date back to 1967. Fast approaching their 44th birthday are the High Speed Trains (HSTs), known to many outside the railways as InterCity 125s. They've long exceeded their use-by-date and with their replacement programme not offering a precise implementation timetable (and with the Department for Transport saying that even when IEP is in full swing, HSTs will almost certainly still be needed for journeys to/from Penzance) the year 2020 suddenly doesn't seem too far away.

1967 for the HSTs? They came into service first on the Paddington routes in 1976, although there was a prototype train a few years earlier.

There is, of course, the 1938 ex-Tube stock on the Isle of Wight. I'm rather surprised a bid has not gone in for some of the redundant 1967 trains.

In 1855 an Act of Parliament was passed approving the construction of an underground railway between Paddington Station and Farringdon Street via King's Cross which was to be called the Metropolitan Railway. The Great Western Railway (GWR) gave financial backing to the project when it was agreed that a junction would be built linking the underground railway with its mainline terminus at Paddington. The GWR also agreed to design special trains for the new subterranean railway.