As if the prospect of London-Frankfurt trains is not enough, nor the arrival on Tuesday of the first-ever passenger train from Germany, First Great Western has flown the Union Jack by recording the fastest-ever journey time between Plymouth and London Paddington on Wednesday afternoon. The record smashed the previous time by 17 minutes.

The journey was made in 2:43, though booked for 2:41. Official figures show the train departed Plymouth five seconds early at 12:49:55 and that it arrived in Paddington two minutes and 18 seconds late at 15:33:18, which (to the second) as a recorded journey time of 2:43:23. The specific record-breaking attempt was undertaken by FGW to promote its new morning service between London and Exeter, connecting there for Plymouth. 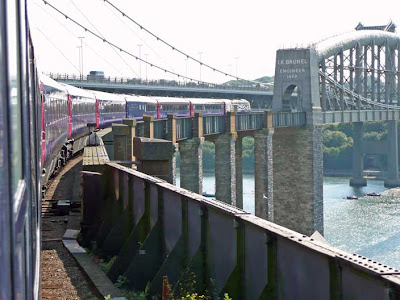 Taken during last year's Top 'n' Tail jaunt, a FGW HST heads east from Saltash to cross the Prince Albert Bridge en route to Plymouth
As you'd expect, all train journeys are recorded and logged but for this to be done by-the-second is very impressive indeed. Although we do not know for certain, this level of accuracy is likely to be employed by the aviation industry. Buses and coaches, as any timetable shows, do not record operate to or record journeys to-the-second - for very good reason! While a signaller or late-running train can slow another down, the very nature of the UK's road network provides such uncertainty that even to-the-minute timings for long-distance coach and bus services is too risky, so rounding up to the nearest five (or even 10 minutes) is commonplace. 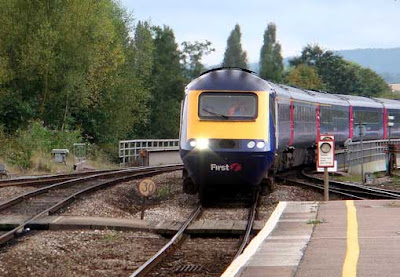 A nice shot of the livery adorning FGW's HSTs today. Photo: FoxyCoxy
As if a 2:43 Plymouth-London journey time is not impressive enough, the journey was made by a pair of InterCity 125s, or HST Class 43s (with one engine working harder than the other). These stalwarts are in their mid-30s now and with the InterCity Express Programme looking very shaky indeed, a decision will soon need making regarding exactly what the fate of these machines is to be. The last overhauls TOCs made to the '43s' are coming to an end and further work is required to ensure they continue to provide the sterling service they have for the past three decades. Loco-hauled trains are being considered, which, while spelling the end of InterCity 125s, would provide a cheaper alternative to the IEP. 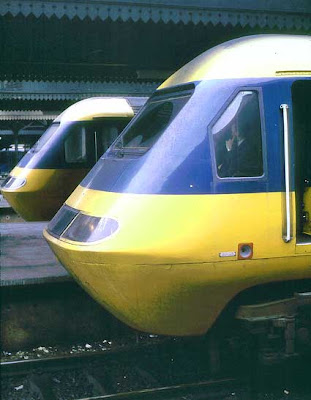 They were originally Class 265s and here is an early shot of two HSTs in London Paddington wearing the first livery - that of BR's InterCity 125. Photo: OlympusOM1
The first '43' appeared in 1976, in a year when P- and R-registered road vehicles were being delivered. You see precious few of these on the roads today. In 1976 the Leyland Fleetline and National were still being produced; Margaret Thatcher was still Leader of the Opposition; and the LEYTR magazine was an adolescent 13 years of age.

Lord Adonis announced during the final months of the last government that the Great Western Main Line, along which First Great Western's HSTs rule the roost, would be electrified. Could an electric locomotive improve on the time set by one of British Rail's diesel workhorses?