'Bashing' before they're gone

I'm not an authority on the London Underground network. I enjoy travelling by Tube, benefiting from the efficient service offered when compared to other modes of surface transport in the Capital and enjoy my time while below the streets of London because, after all, they are still trains and I've always enjoyed train travel. Not everyone shares this viewpoint. Daily commuters tend to begrudge having to travel in crowded carriages in hot, sweaty condition and then paying what they perceive to be a premium to do so, using one of TfL's Travelcards.

I've never been a commuter in London but can sympathise with the day-to-day problems that can occur on the Tube (and lest we forget other transport modes all over the country, too).

It's still a work in progress, but my plan is to travel along every stretch of the Tube network, operated by passenger carrying trains. I've done a fair bit, but there are still a number of extremities that need covering. A number of people, enthusiastic about transport, find it staggering that I'd want to subject myself to this level of 'torture'; as I tell them, it's the mountain climber in me - I do it because it's there. And I can. 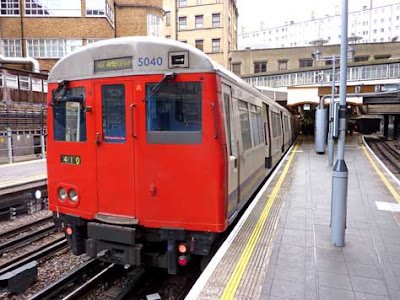 Most service on the Metropolitan Line terminate at Baker Street, with 'only' 6 per hour extending to/from Aldgate. Seen here, after having worked a 'fast' from Amersham is one of the soon-to-be withdrawn A-Stock ('A' named after 'Amersham')
The Metropolitan Line is the oldest line on the Tube network and with the London system being the first ever created, it makes the good old 'Met' the oldest line in the world, opening on 18 January 1863. Its one of my least-travelled lines, owing to very few places I visit when in London being found along its route length. Today, the line has been greatly extended from its original, but it does boast a further two London Underground prestigious claims: that it has the longest gap between any two adjacent stations and that its terminus is further from any central London station.

One of Chiltern Trains' Class 165s on the Down line from Amersham
Additionally, the Sheffield-build A-Stock used is in the process of being withdrawn and replaced by new, air-conditioned S-Stock electric multiple units. The Met Line's A-Stock is now the network's oldest trains, being built in the 1960s and due for replacement. Trains are generally formed of 2 x four-car units, with the exception of the Chesham branch, which is formed of just one four-car unit. It's the Chesham branch that boasts one of the Met Line's prestigious claims, with the distance between the junction at Chalfont & Latimer station and the branch terminus at Chesham being further apart than any other two Tube stations.

Only 6 miles of the Met Line are located beneath the surface and the four-track layout beyond Harrow-on-the-Hill enables fast and semi-fast variants of the main service to operate, benefiting those living at the north-west extremities of the route to reach central London faster than they'd otherwise be able to. The A-Stock fleet does not comprise any sideways-facing seats, so passengers feel more like being on a train as they face either forwards or backwards. The umbrella hooks really date the stock, too, and are a nice touch even though they're rarely used for this purpose today. Met Line trains used to be able to travel at a maximum of 70mph along sections of track in outer London, though today this has been reduced to 50mph (normal maximum speeds for other Tube lines is 40-45mph). 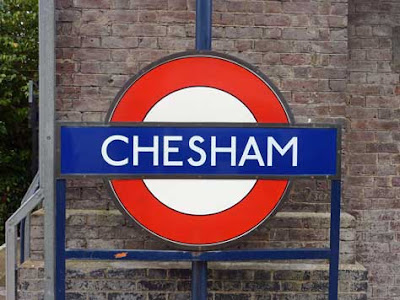 Chesham is further from its neighbouring station than any other on the Underground network. It only sees two services per hour, formed of one four-car A-Stock set that trundles up and down the line to the next station all day (Chalfont & Latimer)
The general service composition is as follows: 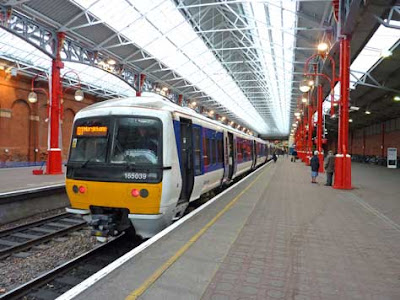 Seen at Marylebone is a Chiltern Class 165, forming the 1027. Very quiet it was, too
I've never been to Amersham before (I've done the Chesham branch a few years ago but time did not allow for me to head to the furthest extremity of the Tube network) so it was on the cards as a result of my weekend in London meeting with friends. We travelled out aboard a Chiltern Trains service, but with it being a Sunday, only one per hour operates, with a journey time of 35 minutes from Marylebone.

Amersham station is no different to that you'd expect to find in any leafy suburb of a large town or city, except this one is served by London Underground with four departures each hour to the centre of one of the world's largest cities. And it's not in Greater London either; it is located in Buckinghamshire. The Met Line's Watford branch's terminus in the same-named town is located in Hertfordshire. TfL's ticketing zones extend to 9, in which Amersham is to be found. While nearer London, the Watford terminus is classified as being beyond Zone 9 on account with fares to/from here with central London being in-line with direct, non-stop National Rail services provided by London Midland, who accept TfL's Travelcards and Oyster. 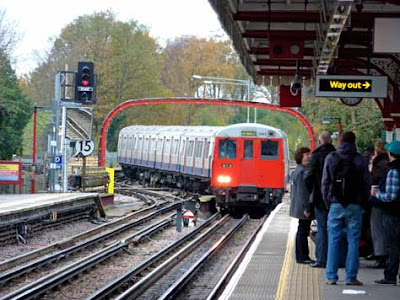 Having turned round in the sidings, out A-Stock 2 x four-car set arrives, operating 'fast' to Baker Street. Four departures per hour leave this station - the furthest from central London, which is actually located in Buckinghamshire
It was quite a chilly Sunday it has to be said, though by no means as cold as yesterday. There was no mention of snow! The under-seat heating on board the A-Stock was very welcome and effective and I couldn't help wonder just how the new S-Stock would compare with its climate control. Experience has taught me that as theoretically simple as climate control is, there's nothing more tangible than a heater on/off switch and an air conditioning on/off switch. Allowing a computer to make the necessary temperature adjustments has just too many potential problems with air con not working at all in the summer and heaters defective during the winter. 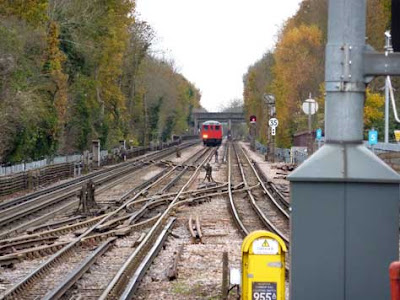 Approaching Chalfont & Latimer is a 'fast' to Baker Street, having left Amersham 5 minutes earlier
The chances of getting a seat on the new S-Stock have reduced. The seven-car 'S7s', of which there will be 133 units, feature only sideways seating, identical in nature to Class 378s operating with London Overground. The eight-car 'S8s' that have been ordered (58 in total) do have some facing/backward seats as they are to be used on the longer diagrams to Amersham/Chesham and Watford. Comparing like with like, the 'S8s' will seat 306 while their 2 x four-car A-Stock predecessors currently seat 448, a reduction of 32%. Standee potential has increased by 25% with this now totalling 1,226 on a new S-Stock train, compared to 976 in A-Stock, although who is going to count when the maximum is stood is anyone's guess. Despite this, the new eight-car S-Stock does have a net capacity reduction of 7%; more when seven-car sets are considered. 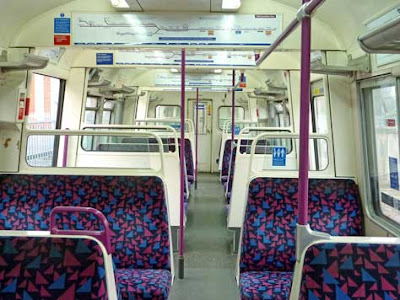 A-Stock seating is comfortable and more than adequate, though standees can find themselves jammed against seat backs, hence why the new S-Stock will be built with standees in mind - even though some of the longest duration commutes take place on the Met Line
On a Sunday at this end of the Tube network, services are very sparsely populated indeed. Our train from Amersham, fast to Baker Street, was apparently to be held at Harrow-on-the-Hill owing to a signal failure, so we bailed out at Chalfont & Latimer and had a trip to Chesham and back. By now there was no signal failure mentioned so we boarded another A-Stock set to Baker Street and then headed aboard a brand-spanking new Volvo B9TL/Wrightbus Eclipse Gemini operating Service 18 (that had recently seen de-bendification take place 6 days earlier) to Euston. 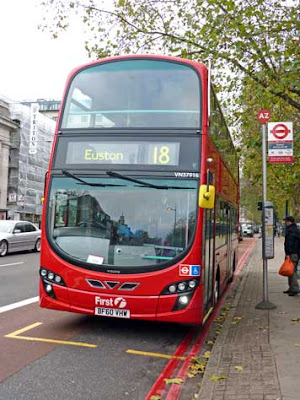 In its seventh day's service - this Volvo B9TL/Wrightbus Eclipse Gemini operated by First London, having replaced articulated Mercedes-Benz Citaros on the route at the start of the week
It was then a very comfortable ride aboard a Scania OmniCity to Liverpool Street Station - Service 205 now operated once again by 'Brian's lot'. From here we met friends for a boozy afternoon before trying out the new London Overground extension from Shoreditch High Street to West Croyden. 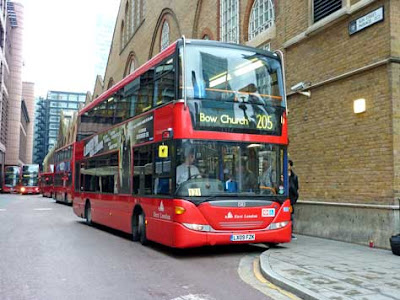 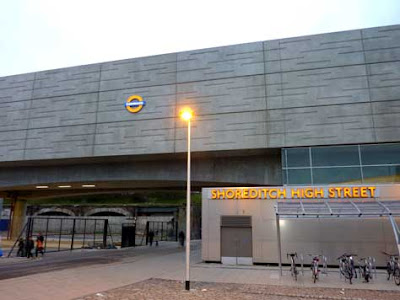 Light was fading as we headed to Shoreditch High Street station to head south aboard an London Overground service to West Croydon
As is customary when in Croydon, a trip on the Tramlink is required - on this occasion to Beckenham Junction, before heading into Victoria aboard a Southeastern service. A trip aboard a route enjoying its articulated swansong (Service 73) before returning north aboard the 2000 East Coast service from King's Cross to Peterborough. Sadly, we were not afforded our timetabled 44-minute journey time as I previously blogged. 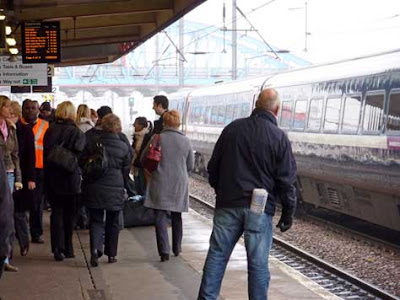 Passengers become anxious after 44 minutes and 1 second when their train has yet to arrive...