Following last night's significant delays, we were made aware that what is believed to have happened is that vandals threw one or more objects from a bridge onto the catenary on the West Coast Main Line, with one missile damaging the overhead equipment to the point that part of the mechanism was displaced and hit by the 1620 Euston-Manchester - the train, ironically, managed to continue in service around one hour later. The 1623 Euston-Wolverhampton was less fortunate and lost power and was rescued by a Class 57. We were very fortunate the signaller sent the stop command to our driver before we entered the damaged section. 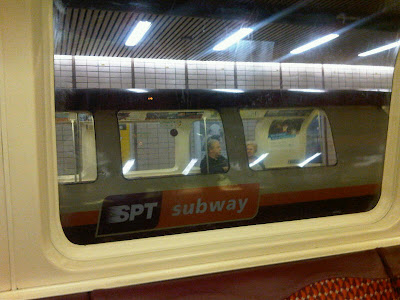 We still got a good 8 hours sleep in, though, as our first train wasn't until 1000 - a Virgin Voyager to Carlisle. Before that, however, we had a ride on Glasgow's subway section, dubbed the Clockwork Orange. Last time I visited Glasgow, I undertook a circuit on the inner circle; this time we chose the outer circle, joining at Buchanan Street and doing a loop plus one stop, alighting at St Enoch. Our unit was 126 working diagram 5. The loop took approximately 27 mins, after which we headed to Glasgow Central.

Actually, we cut it very fine indeed, arriving just 5 minutes before 221104 Sir John Franklin departed, bound for Birmingham New Street. As with our last trip aboard one of Virgin's Voyager sets (Sunday, Crewe-Bangor), this was formed of five cars with one being First Class. We made good progress through the edge of the Lake District to Carlisle, arriving on time, and after a very tasty bacon panini. 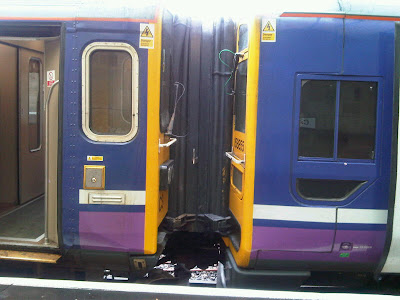 At Carlisle we had enough time to catch up on all the News of the World gossip from the free papers before our next train arrived: 153359+158855, working the 1155 Northern service to Leeds via the iconic Settle-Carlisle line. I'd not travelled on this section of route since childhood so was eager to include it in this week's itinerary. We departed on time and the train was filled with people with ruck sacks and walking boots and we made steady progress. The weather - having been glorious every single day without exception - looked ominous, with very large, black clouds in our direction. 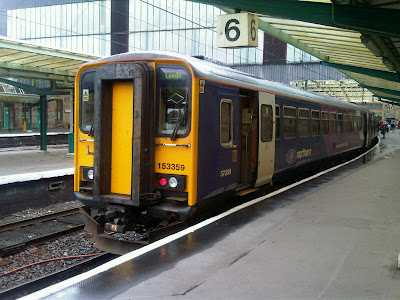 At 1300 precisely we passed the line summit at Aisgill (356m/1168ft) and soon after through Dent station (the highest mainline station in the UK, at 1150ft above sea level), before crossing the world famous Ribblehead Viaduct - our guard even announced our crossing. Line speed here is 30mph maximum, lending itself to passengers' enjoyment of the view. Many people lost their lives building the line, not least the construction of these enormous viaducts. While I don't consider the 'drop' to be as great at viaducts that litter Brunel's line into Cornwall, the crossing was no less impressive than I remembered. As a child, my first crossing was aboard a loco-hauled train, comprising a very long rake of mk2 coaches, which I vividly remember stopping twice at Settle - once to accommodate the first few coaches and then moved further up for the second half. 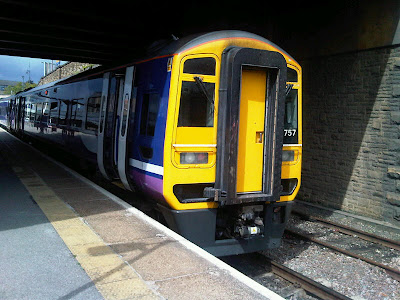 Our initial plan was to get off at Ribblhead and photograph the viaduct before returning north on the next available service to Carlisle and then Virgin to London, but we had planned to try and bag a Class 180 working with Grand Central. This we managed by remaining on our Northern service to Leeds (and not alighting at Ribblehead as intended - a good call as it was utter cloud burst as we called there) and catching another Northern service from Leeds to Bradford Interchange at 1453, formed by 158757, bound for Blackpool. 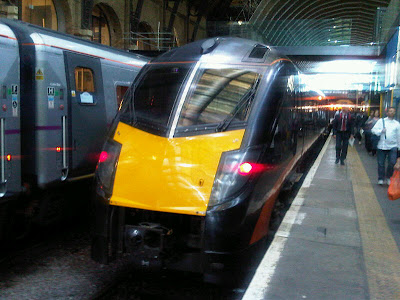 Once at Bradford Interchange we crossed platforms where our Grand Central Class 180 (the company no longer refer to these trains as Adelantes or as we believed they preferred, Zephyrs) was stood. 180104 was our train, looking resplendent in its black livery. Other than the driver, only two crew worked the service, and having only ever caught a '180' once before, while in service with First Great Western a number of years ago, was very impressed with the interior of the train. First Class tables don't have the integral board games, unlike the HST, but everything else is appears fresher and more modern. Leather antimecassars look very swish, too.

We took an absolute eternity to join the ECML, just north of Doncaster. Similar to the Sunderland service, the speed along the non-ECML sections of route is mind-numbingly slow. We waited outside Wakefield Kirkgate for a platform to become available for over 5 minutes yet still had time to kill there before our scheduled departure. That said, it is the direct link the company offer that is a very strong selling point.

Once on the ECML we called at Doncaster and then direct to King's Cross. We ran up to 10 minutes late as we didn't appear to have a very efficient slot. An East Coast '91' overtook us after Doncaster and then we constantly slowed down with this express now holding us up. A Class 91 was noted on Platform 3 at Newark Northgate - diagrammed to be a HST and prior to a very bum decision at the end of last year, would have been headed to Lincoln Central. 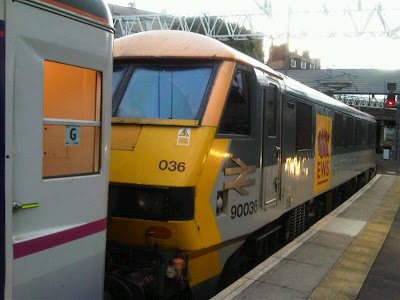 We made use of East Coast's First Class Lounge in King's Cross - we planned on using it on Saturday morning but it didn't open until after our first train had departed - before walking to Euston and catching our second sleeper service of the week, this time to Inverness. 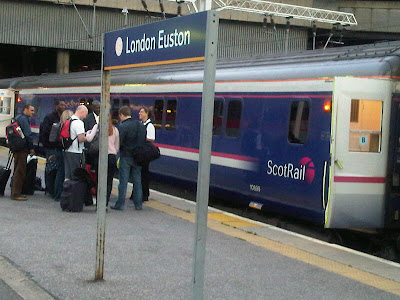 Tomorrow is a milestone for two reasons: it is the final day of the 2011 LEYTR Railrover and it also marks this blog's 1,000th post. We're both going to the lounge car to celebrate. Goodnight.