Today is a historic day for the LEYTR Blog: A Transport of Delight, as it is our 1,000th post. We also celebrate the end of our around Britain epic Railrover, with the final entry below.
Next week a series of posts that will predominantly detail photos with captions that tell the story, will appear. The photos used this week have been taken by my 3 million pixel phone, not my 14 million pixel 'bridge' camera with HD video facility, so there are some corkers to upload in due course.

Back to today, however, and I awoke just after 0400 when the Class 90 that had hauled us our of Euston and along the WCML last night, was coupled much nearer to the front of our coach than it had been. When braking it was as if gear changes echoed throughout the sleeper. Not pleasant at all. The Inverness portion of the train - 8 coaches today - is the last to be coupled to a Class 67 on Platform 19 at Edinburgh Waverley. We were supposed to depart at 0424 but did so at 0448, with 67030 replacing 90036 at the front. 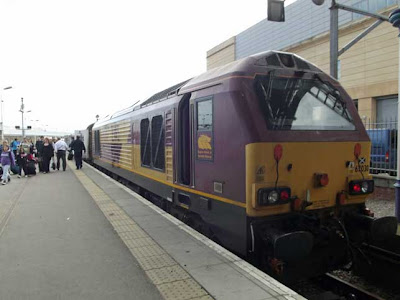 The '67' was much smoother and I soon fell back to sleep and awoke when the host brought the complimentary breakfast, featuring what must be the world's smallest bread roll. All free and welcome though. Except for the UHT milk in a stick! 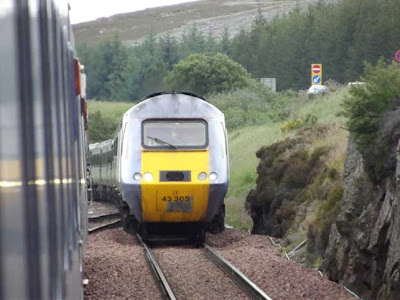 Realising that the London-bound East Coast HST was due to pass us at any moment, I rushed around to try and capture it doing so. We had stopped at a passing loop and it was the train we were awaiting. Not on my phone but on my main camera, I captured a cracking video of it passing that I'll upload in due course. Elation turned to anxiety when we saw how late we were. An expected arrival time of 0848 was showing on the National Rail website and we were booked aboard the Citylink coach from Inverness to Fort William at 0845. I always knew this would be particularly tight. A simple calculation for the time the HST had taken from Inverness, where I knew it had departed at 0755, to our location revealed that we would arrive at 0839 - tantalisingly do-able yet at the same time worryingly tight. 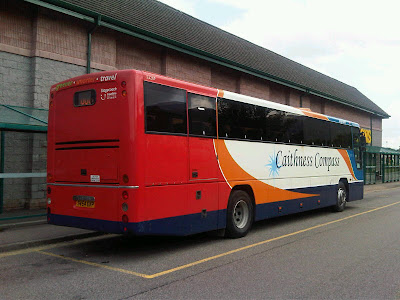 Our DB Schenker loco driver gave it the beans and we clocked him attaining 83mph at one point. All very welcome, and we arrived, as I'd roughly calculated, into Inverness at precisely 0839. Without hanging about we made our way to the bus station and saw the coach at the stance. It was in Stagecoach livery, 53209 (SV54 EKP), a Volvo B7R/Plaxton Profile, working the 919 to Fort William. The English driver was very accommodating and told us there was no need to rush as he would be delayed leaving as he was awaiting a mechanic from the depot to sort out his wingmirror, which didn't look in a good way.

Can you believe it took 30 minutes for this to be repaired, so we departed at 0915 and the driver drove so hard and fast to make up time that the engine overheated. He stopped at a garage in Invergarry to add cool water to his boiling engine, but the alarm still sounded for the next hour to Fort William. We were both glad to get off for a number of reasons. 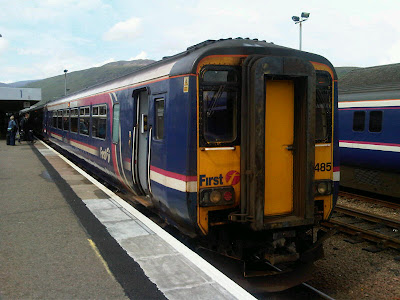 In Fort William we had time to photograph the portion of the sleeper train that we were attached to leaving Euston the night before and West Coast Railways' Class 37 before our train to Glasgow arrived from Mallaig at 1140: two ScotRail Class 156s that were heavily reserved: 156485+156465. A load of people boarded and after the ensuing melee, we found a pair of unreserved seats for the lengthy journey to Scotland's largest city. I'd only done this route once before in 2005 on the sleeper service heading north and slept through most of it. It is a very spectacular line, slightly less so than the stretch north of Fort William to Mallaig (which I bagged in 2009), but still very much worth the ride.

Some of the gradients on this section of line are incredibly steep and perhaps more noticeable with our reduced speed. We arrived on time into Glasgow Queen Street at 1530. 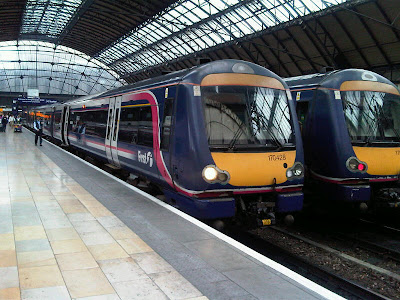 Just two platforms away from where we arrived was our next train, the 1545 ScotRail service to Edinburgh via Falkirk. We'd done the reverse journey on Saturday via the recently re-opened Bathgate line so planned the slightly faster and more direct on this occasion. The small First Class section was very quiet, despite the numbers choosing to travel on this train in Standard, and off we went, aboard 170428 - our first Turbostar of the jaunt.

We seemed to run at decent speed throughout and weren't held anywhere but we arrived into Edinburgh Wavereley a few minutes late. Our plan now was to catch the 1700 East Coast service to King's Cross - our penultimate journey of the week. Being Friday evening the train was both busy and, understandably, heavily reserved, especially in Standard, but we managed to get seats in First. 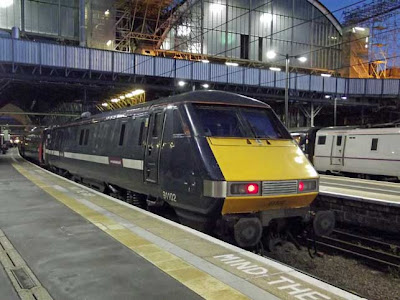 A very enjoyable journey south along the ECML with 91102 propelling us. The loco does look rather tatty, with both GNER and National Express branding still visible under the East Coast names. It's Durham Cathedral name, which was given to it by GNER, was still visible on the loco. Inside, we were served the All Day Offer menu, with a change of crew at Newcastle. Unlike Virgin Trains, East Coast doesn't offer the Evening Meal menu to any journey other than those leaving London from 1700.

43257+43313 were my final trains of the jaunt, working the 2200 East Coast service to Newcastle, though I would be alighting at Peterborough at 2245, where my lift to take me into railway-less rural Lincolnshire would be waiting. We departed on time and despite East Coast having a ruling about passengers in First Class travelling for less than 70 minutes being only offered drinks and biscuits for free, was both offered and took up a main course in the Evening Meal menu. Plus another G&T for good measure. A very civilised end to a jaunt that has seen a personal mileage of over 5,800 in 7 days. 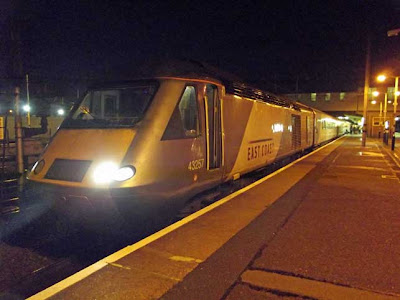 43257 awaits its 'right away' from Peterborough a little later than its advertised 2246 departure
More of the Railrover in the coming posts next week. Time for bed now!!