M'colleague and I arrived at London King's Cross aboard the first direct ECML-operating train from Lincoln in 18 years just in time to welcome the arrival of one of Britain's most iconic railway sights - the Flying Scotsman. Booked to take just 4 hours, the train, operated by nationalised train operating company East Coast, departs Edinburgh at 0540 and stops only once at Newcastle.

Welcoming the train as it pulled onto platform 1 was a piped band and a purple carpet. Signage, a stage and spotlights had also been erected for the special occasion. The 9-carriage Class 91 and DVD made its appearance from Gasworks Tunnel almost on time and received a rapturous welcome. 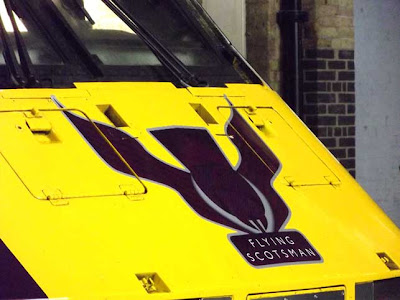 The train departed Edinburgh's platform 7 on time and ran up to 3 mins early through the North East and into Newcatle. Its departure from Tyneside was as booked at 0703 and the train once again made excellent time through North and South Yorkshire and Nottinghamshire, running up to 2 mins early. Between Claypole and Grantham, however, it lost four minutes and began to run up to 4 mins behind its non-stop journey towards the Capital, clawing back 50% of its delay as it arrived at King's Cross at 0942.

We joined the press in taking some very memorable photos and collected our free Flying Scotsman ticket wallet. 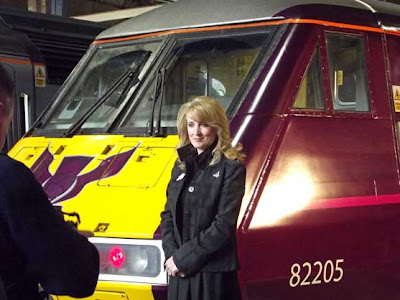 Elaine Holt, the CEO for Directly Operated Railways, the government company set up to operate train franchises brought in-house. East Coast is DOR's only responsibility to date
Edinburgh Waverley to London King's Cross is 393 miles, along the full length of the East Coast Main Line, and to complete the journey in 4 hours requires an average speed of 98.25mph to be attained.

By comparison, West Coast Main Line operator Virgin Trains has a similar Anglo-Scottish journey, though theirs is northbound from London Euston at 1630, calling once (Preston) and arriving in Glasgow Central at 2038 - a 4:08 duration, but covering 8.25 more miles (401.25 miles in total). This sees an average speed of 97.15mph. 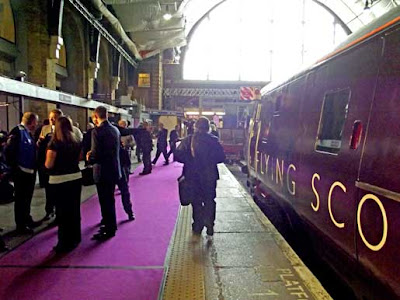 There's been a fair amount of chatter within the industry about the Flying Scotsman and how its operation will cause reduced journey possibilities and increased journey times to other services south of Newcastle as Network Rail has kept a significant 'buffer zone' in front of the train to ensure it stands a good chance of making its headline journey time. But yesterday wasn't about that. Yesterday saw an icon of Britain's railways return. An iconic name. An iconic brand. An iconic journey time.

The old idea that the crack expresses must get through is a worthwhile concept. It creates a can do attitude which hopefully permeates the entire railway edifice, given half a chance

And, perhaps, ONE more stop - York, for the same journey-time.

It better not delay us on Tpe around Doncaster. A bottleneck and prime spot for delays caused by East Coast getting priority.
Mr B.

So now Lincoln has two trains a day to London instead of one. Eureka! What a pity they both leave within ten minutes of each other in the morning ...