The online Way Out Map

A number of years ago I invested £5 in the Way Out Map. I'd never seen anything like it before. It has primarily been produced for people who don't want to be travelling on the London Underground network for any longer than is strictly necessary. Simply find the station you're travelling to on the map and it tells you which carriage to position yourself in when you board to ensure that you're adjacent to the exit at your destination.

With anything up to a potential of 500 people simultaneously disembarking with you, this can be a significant heads up.

Obviously the Way Out Map isn't as small as the conventional Tube Map - and nor is it free. Travelling on the Tube actually doesn't bother me either, but I was fascinated by the concept. I suspect many users will have made a strategic purchase along the same lines. 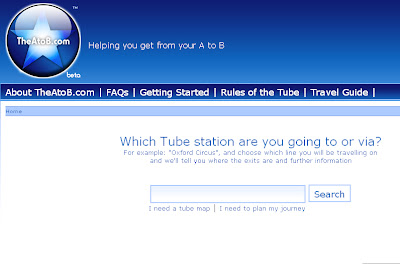 Trouble is, though, I can't remember the last time I've remembered to take it with me to London. It must have been years since it was a travelling companion of mine. Help is at hand however because an online version is now available. Although all sections of deep-level running see absolutely no mobile Internet coverage whatsoever, TheAtoB.com can at least be used prior to descending the depths. 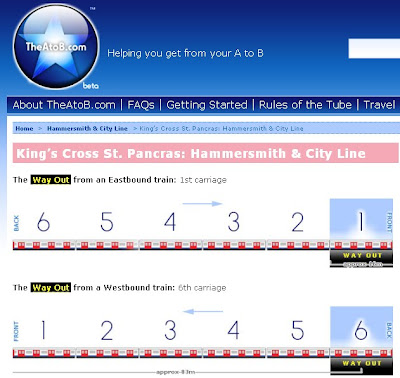 If you don't put an apostrophe in King's Cross the result comes back as 'no stations found'
The site is self-explanatory and offers the same result as the Way Out Map. Except this is free and updates are more easily made without the need for another print run. I've bookmarked it in my BlackBerry. Hope to use it on Monday when m'colleague and I head to that there shiny London aboard a certain historic train journey from the LEYTR area....
Posted by LEYTR