A few days ago, train operating company East Coast revealed its much anticipated timetable that commences in May. With a working name some would argue was over-optomistic, the Eureka! timetable has caused quite a storm with other train operators, user groups, passengers and Network Rail. It has been postponed due to the final versions being contested and freight operators still aren't happy. The main 'beef' concerns too much priority being afforded East Coast at the expense of other franchised and open access TOCs. Up to six months ago, some freight companies hadn't even been consulted at all! 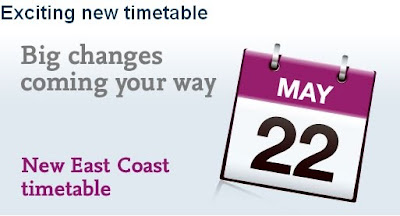 But it's here now and you can view it all by clicking here.

Of particular note is a new headline 4-hour journey between Edinburgh and London King's Cross. Named the Flying Scotsman, East Coast has ensured that the direct service, calling only at Newcastle, offers what many in the rail industry see as the holy grail: an Anglo-Scottish journey time of 4 hours.

1E01, the Flying Scotsman, departing Edinburgh on Mondays to Fridays at 0540, calls at only Newcastle (0702-0703) before arriving in King's Cross at 0940. This 'crack express' reaffirms the prestigiousness once placed in such a service, that had been allowed to wilt somewhat during privatisation, with both GNER and NXEC having downgraded their named Flying Scotsman journeys by inserting additional calling points to slow end-to-end journey times and thus allow other, less prestigiously titled journeys a superior duration. 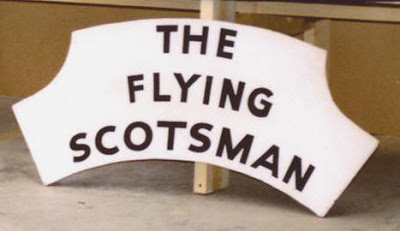 The Flying Scotsman headboard is now carried mainly by charter trains operating the Anglo-Scottish route. Hopefully East Coast's 4-hour crack express will do the same from 23 May
The Flying Scotsman is synonymous with the East Coast Main Line, for it was long this route in 1862 that the first Anglo-Scottish passenger train operated, with a duration of 10.5 hours and a lunch stop at York. It was named the Special Scots Express. By the turn of the last century, advances in technology allowed the steam locomotive to operate at higher speeds along the route, which saw a reduction in duration to just 8.5 hours. From 1923 the Special Scots Express was renamed the Flying Scotsman.

So prestigious is the name that GNER - the first privatised operator to run along the ECML - referred to itself as the operator using 'The Route of the Flying Scotsman', with the statement adorning each and every trainset in its fleet.

The trains associated with the Flying Scotsman have been reasonably varied, with some of the first being GNR's Stirling 4-2-2 'Singles', followed by the first examples in the UK of the British Atlantics (Ivatt C2s); Gresley's A1, A3 and A4 'Pacifics' followed and the first diesel loco used by British Rail was the Class 55 Deltic, being replaced by the Class 43 HST and the current Class 91 '225s' that work today's more lacklustre service. The 0540 Edinburgh-London is booked to be worked by electric traction, so the '91s' will continue to be deployed.

Back to the Eureka! timetable, and there are a number of obvious advances, namely direct London-Harrogate and London-Lincoln services. It's just a shame Lincoln missed out on its remaining six daily journeys. More on that in the next LEYTR magazine.