Those wishing to become a bus driver must pass a number of tests. One is the Driving Standards Agency's Theory Test. It obviously differs from that for cars owing to the many different aspects of driving a bus and coach. One question posed to candidates concerns the number of bell pushes a driver hears and the associated meaning for each.

With its routes firmly set in the days when conductors were prevalent on all buses, the number of bell pushes heard by the driver/made by the conductor went a long way to ensure the efficient operation of all services. Today, however, conductors have all but vanished, yet contained within the pages of a DSA Theory Test book for PCV/HGVs that I looked through a while ago, PCV wannabes were expected to know this information.

With passengers now the sole bell-pushers, the question ought to have changed to 'How many passengers know how many times to press the bell?' 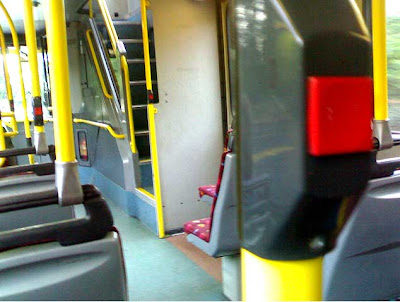 Drivers need to be a lot more observant of their vehicle's saloon and will be able to spot when it's safe to leave and when their bus is full far better in one of today's driver-only operates single deckers than in a Routemaster or an RT. Emergency situations are soon relayed to drivers by those on board so there's very little need for the bell sequence questions.

This differs in the rail industry, where it could be argued there's more need now than ever. Guard to driver communication is made in an almost identical manner to that between conductor and bus driver of yesteryear: Bell/buzzer pushes.

With those in charge of the train and its passengers categorised as 'safety critical', continual testing is undertaken to make sure both driver and guard's knowledge is sufficient in this and all areas of their employ. Train passengers are not and have never been expected to be aware of this information, since it is impossible for them to communicate between the saloon and the driver in this manner. They have what used to be referred to as the 'communications chord' or in nowadays speak, 'two-way communications system'.

Ask a bus driver what three pushes of the bell means and he'll probably reply: "a load of kids messing about at the back." Ask a train guard and he or she will immediately reply: "set back".

During April, a LEYTR member became a train guard for one of the UK's train operating companies and we serialised the whole process of his training on this blog. Click below for the articles.

Part 1 - The Application
Part 2 - The Training