Becoming a Conductor: The Training

We were all getting along very well and arranged to meet next morning for breakfast in hotel restaurant prior to starting the Conductor course back at our TOC headquarters. 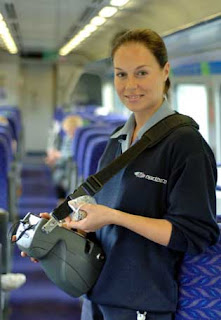 Meeting for our meals became a daily occurrence for the next 3 weeks (Monday to Friday) in Manchester and we all got along very well. I had a new nickname too – Frank as in Spencer. The guys from the North West all agreed this was very apt after hearing my stories of tales and tribulations!

By the second week the friendly hotel staff were warming to us and our friendly banter! The hotel meals were excellent - you name it, we had it for breakfast each morning. The a la carte evening meals were even better! All paid for by my new employer.

The first day with our trainer went well – he has 30+ years in the rail industry and could out-talk me with his stories of life on trains! Nice bloke!

We were now bumping into various other members of my TOC's staff, especially as the training room was on same floor as the staff mess room. I say 'mess room' lightly due to the fact they have leather sofas, digital TV and allowed us to contribute just £1 each per week to join there unlimited Tea/Coffee club – oh and Rail Gourmet food and drink provided (trainees only) for lunches - excellent!

Everyone we meet seem very pleasant so far! Professional but pleasant.

We were soon taking lots of notes for the training from our teacher's thorough presentations. It was also soon apparent the rail industry has a lot of jargon used on a day-to-day basis, of which I was simply unaware. A fair amount of slang is also used in relation to the day-to-day terminology. It was like learning two new languages!

We usually started training at 0900 and finished at 1600, so I made a point of revising and re-writing my notes taken that day once back at the hotel. Some great architecture and places of interest, old & new combining effortlessly. Interesting museums such as MOSI, which is located on the historic site of the world’s oldest surviving passenger railway station. Housed in five listed buildings, MOSI’s amazing galleries and outstanding collections tell the story of Manchester’s scientific and industrial past, present and future.

After the first few days learning about housekeeping, depot notices, weekly & periodic notices, sectional appendix and other things in general, we were now getting deeper into it. We were working through the Rule Book now, which is written to cover every employee’s aspect of working on the railway. As Conductors, we have to have full knowledge of signals so that took a while to cover thoroughly. From which signal box controls a certain signal to signal types, semaphore, colour light aspect, meanings, etc. Then there is the different terms given to sections of lines, station limits, track circuit block, absolute block, single line, token etc etc. From an outsiders point of view a lot to understand at first!

We went onto learn about the specifics of lines and the infrastructure for our PTS (Personal Track Safety) so the '4 foot' is the area between the running line; '6 foot' area between Up/Down tracks; and '10 foot' area between 3 or more running lines. The meaning of Ups & Downs for the lines is usually dictated by the principal station's location on that line [there are hundreds of exceptions to this, Eds]. 'Cess' been the nearside of a line and the safest place to be out of the 3 above! AC & DC electrification lines and equipment were also covered.

Train safety is obviously paramount so we were taught what procedures to perform to protect the track in various circumstances. From contacting signallers to how to evacuate a train. A day was spent at one of my TOC's depots for this and to use a simulator for one of the train types we'd be conducting. I managed to drive it from my soon-to-be new base to the next station without crashing!

It’s very much a team effort as if things do go wrong it is essential that Conductors, Drivers, Signallers, Train crew, Control Staff, Retail Staff fully understand what is happening and confirm this understanding.

An afternoon was spent in the signal box at Manchester Piccadilly - effectively a large window-less room on the 7th floor of Piccadilly Towers. A whole wall was lit up with a computerised illuminated map (a.k.a. the London Underground) of Greater Manchester. Every train (defined by its headcode) and signal is able to be seen at a glance. It's split into 8 segments - west to east - each given to a signaller sat at his control desk in front of said wall.

We had a day with a semi-retired couple, for the purpose of deafness and disability training. They are both deaf themselves but were amazingly good at teaching us the basics of sign language. The husband was certainly a comedian and didn’t allow his disability to cause him a problem whatsoever.

Another day was assigned to conflict training whereby actors are used to create problem situations in stations and on trains. The actors were extremely good and realistic in the language and actions used. By working through the scenes step by step as a class we learnt how to solve both their problems and ours! Obviously every case is different so we shall see what happens in the future though!

During the 2nd and 4th weeks we had written assessment questions to answer from what we had been taught based on the Rule Book and training to date.

A separate assessment test was undertaken to gain our PTS which allows us authority to go on or near the line.

The 5th week was spent in Huddersfield, commuting from Manchester, dedicated to the retail and ticketing procedures. The first three days went through paperwork then 2 days with the Avantix ticket machine. This week was frustrating as three of us had to share 1 machine which didn’t aid the learning! As part of the retail training we also spent one morning with qualified revenue protection staff. They had there Avantix ticket machines, chip & pin wireless bluetooth device, cash floats and table as we set up stall at a small suburb station west of Manchester to form a human ticket barrier... Great idea and an effective way of catching the fare dodgers! In just 2 hours we took over £500 in revenue that would have otherwise just walked out of the door. Various types of passengers were caught out, young and old who had overridden to our station, not bothered to buy a ticket or attempted to use concession passes before 0930.

Part of the 6th week was taken at Manchester undergoing the traction-type training that I'd be working with. We then received three days working trains by simply operating the doors under full guidance of the conductor. Everything we are taught has to be confirmed in written knowledge tests. This applies to Signals, Routes, Traction Types/Features, PTS & Rules & Procedures!

A lot to take in during a short period of time but once actually on the trains it starts to make more sense! Obviously it helps seeing what has been talked about for the past 6 weeks!

The 7th week saw the start of route learning from my new depot. I initially worked one of the shorter journeys, around 50 minutes in length each way. I also had a day put aside for a safety briefing.

Week 8 was dedicated to more route learning, this time the lengthier route I'd be working - including diversionary routes for certain journeys.

Week 9 saw me undergo my written Route Assessment Knowledge. I was able to refer to my notes and my personal ‘Route Card’ invention for prompting if required. Managed without so must have revised well! I also completed the traction-type training on the two traction types I'll be conduction aboard. 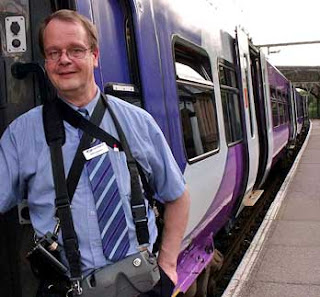 Weeks 10 & 11 saw me start out with my ‘Minder’ on his shifts. Another nice bloke who likes to see the job get done! Speaks his mind if need be and creates no fuss! Typically most of the time spent with him could have been busier in order to learn more. It was now very much a case of fast learning & quick decisions in real life working trains. In specific ways you learn more from minder than anything else. I had to think on my feet now especially when my 'minder' said he would follow me down the train then when I looked around to find him he had disappeared! Strangely the opposite happened when I was not expecting him to be around – there he was very astute & eagle eyed!

During Week 11, I completed the final traction-type assessment required of me.

Week 12 was assigned to further Rules/Regs & PTS revision and assessments. This was the 'biggy' - I needed to 'pass out' before being let out on a train on my own. Thankfully, this occurred, with my depot manager informing me of the good news. I then had three spare days, so spent the time volunteering to work a colleague's train, enabling him to put his feet up in the back cab.

Week 13 commenced 5 April 2010 and saw me on my own. It was Bank Holiday Monday and I'm working a normally hectic journey full of commuters, though I've been afforded a break since none were present. The amount I took on the journey was around twenty-times less that which I'd normally be expected to pay in. This eased me in nicely.

Other aspects of my training and required knowledge includes the phonetic alphabet, it being the accepted method of communication for the rail industry so this had to be learnt: alpha, bravo, charlie, etc.

Bell buzzer codes are also used on my trains as a means of the conductor communicating with the driver. They are: