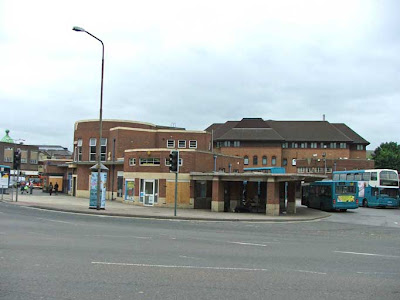 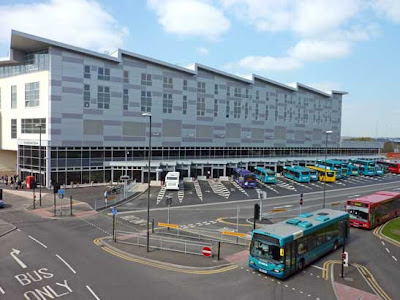 Delayed by three years, over-budget and an unwanted replacement for what the majority of residents were content using, Derby's new £100 million bus and coach station opened on Sunday 24 March 2010. The new facility that has been built on the site of the former Art Deco structure dating back to 1933, sees a massive transformation for bus and coach users there.

Beleaguered is possibly the best noun to describe Derby City Council's fortunes from the day a decision was taken to foreclose the former station. There were numerous protests against locally-employed Charles Aslin's design being flattened by bulldozers, primarily from bus passengers who believed the station coped well with the level of vehicles that used it and formed the 'if it aint broke don't fix it' opinion. 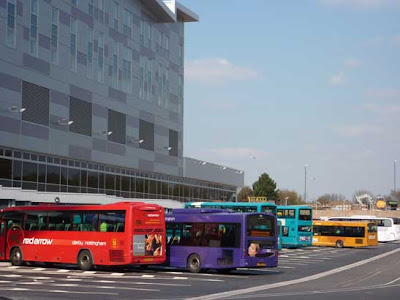 The finished product is very colourful, though this is in no way down to the structure!
Demolition took place in July 2006 - delayed - following the station's closure on 22 October 2005. Protesters broke through the flimsy perimeter fence and camped out on one section of roofing. During the first part of 2006, they even managed to hoist a caravan onto one of the building's roof. No sooner had this obstacle been overcome when just three months after the station's closure, the main contractor for the scheme went bankrupt and with the City Council not securing any form of bond, there was a time that genuinely saw the entire scheme in limbo. 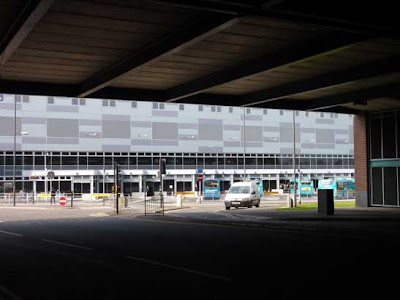 The new Westfield Centre replaced that of the Eagle at the same time as the bus station's opening. Linking the car park on the Cock Pit to the main shopping centre is a substantial walkway, under which pedestrian access to the bus station can be made
City centre congestion increased with all bus services calling at on-street stops and the requirement to allocate and police lay-over areas was also causing problems for many operators. A new developer was sought and work resumed - on paper - by April 2006, though not a spade had been lifted six months after this.

It was all a far cry from the 1930s when Charles Aslin designed the new station and its completion heralded the first bus station of its kind to contain double platforms and overhead canopies. Even The Beatles were rumoured to have dined in the upper-deck café during the Swinging Sixties. However, not everyone enjoyed the surroundings of a 1930s Art Deco facility and the local council submitted plans as early as 1977 were drawn up, with the station's demolition in mind. While the bus station's very own Action Group merely prolonged the facility's closure, they did ensure this was delayed for another 28 years! 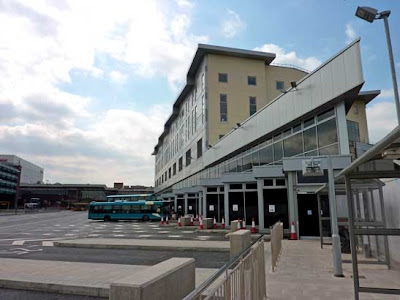 The 5 coach bays are outside and are skewed at 45 degrees from the 24 main bus bays
They also ensured demolition was delayed by a further year following the caravan-on-the-roof incident. Was it time for a change? Residents thought not. Councils don't generally like paying for things on this scale that are un-needed, so by comprising the bus station's re-development with another in the city centre - Riverlights (with the principle contractor now in the black), justification can seem far stronger.

The old bus station did conform well to housing a great number of vehicles in a relatively small space. It also had four entrances and exits, compared to the new structure's two. Facilities were thin-on-the-ground and not in a particularly good state of repair, but then who opts to dine out within the confines of a city centre bus station? The architecture was incredibly pleasing to the eye and one of the last examples of its type in the UK. That said, I was very much taken aback with the new bus station when I saw it for the first time on Easter Monday. 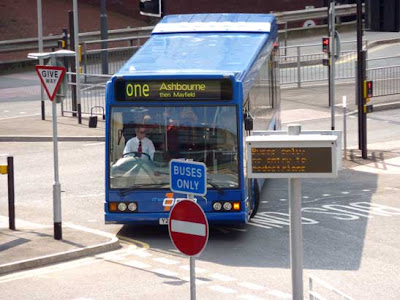 Trent Barton's oldest bus service enters the UK's newest bus station
The number of departure bays remains constant, though there's a 100% increase in the need for reversing. Drivers of all companies received training in how to do this as safely as possible. Upon departure time, all vehicles should reverse in a straight line until clear of the vehicle to their right, then turn right and head for the lane designated by two double-white lines, in order to exit. All vehicles travelling forwards should give way to vehicles reversing.

The facility now boasts a very modern under-cover waiting area, with the excellent publicity you'd expect from Derby City (& County) Council, along with supplemented information provided by the local bus operators. A new travel office is situated in the centre and manned by City Council employees, ensuring impartial advise is given. Toilets are a marked improvement though now cost 20p to use. Staff facilities are behind closed doors and on level 1, with Trent Barton and Arriva drivers having separate canteens. Only the five coach bays have an outdoor waiting area, though substantial canopies are also present. 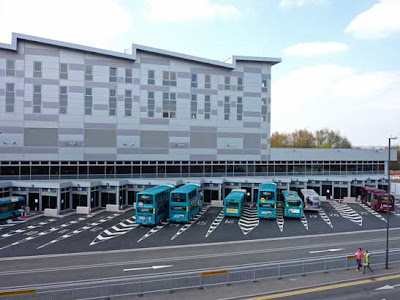 The 'Arriva Huddle' is evident here, with the operator taking up the central departure bays
Numerous departure screens are situated. A new problem exists now since the screens effectively show timetabled - not real-time - departure information. The newly-appointed security personnel are inundated with queries from concerned passengers who see their service had gone from the screen but hasn't yet turned up. By no means is this phenomenon unique to Derby, but one that didn't exist before technology got involved.

The City Council produced a Bus Station Blog from the start of 2009 when building work really got into full swing; their official web page details very little indeed - and no mention of the final cost of the scheme. Work continues on the main building, which will eventually house shops and restaurants.

As long as two years ago, operators and the City Council were vying for the best bays, and with a 60p-per-departure fee being charged, it's one of the UK's more expensive bus stations. A number of operators' services that hitherto used the bus station, no longer do so and pick-up on the streets of the city centre instead; in some cases this is down to the very high departure charge. Generally, though, the first bays are allocated to Trent Barton, Felix, Notts & Derby, Littles, Doyles and Kinch Bus services, then the low-teens are allocated to all Arriva services, with the high-teens and twenties allocated to Trent Barton and coach operators. Bay 1 is not used as a standard 40-ft bus reversing from here would do so into the pedestrian crossing and the main road (Moreledge).

The bus station has certainly left a lasting impression with me. It's a straightforward line of 24 departure bays, with the five coach bays continuing in a straight line but skewed by about 45 degrees. The backdrop is what makes the development look particularly impressive - very different to anything Mr Aslin would have designed back in the 1930s, I think you'll agree!