Finally, the long-awaited addition to First's Greyhound network was announced last week - Bournemouth. Actually, the destination showed up on the operator's website before any mention was made officially. All the press release did was effectively announce the start date.

Bournemouth is another South Coast destination chosen by Greyhound to link with Central London, with Portsmouth and Southampton being the first in its portfolio. The frequency of the new Bournemouth service will be a tentative two journeys per day and will commence from 1 May. Compare this with National Express, who operate 22 journeys, all calling at neighbouring Ringwood and many with stops at Hammersmith and/or Earl's Court in London, is it really worth Greyhound bothering?

Journey times appear similar, with Greyhound's 2:25 being five minutes longer than NX's shortest. Announcing the initial routes an 'unqualified success', Greyhound's MD Alex Warner said that this has prompted them to look at other towns and cities with which to link London. Really? The word on-the-street back in September was that more was to come, as soon as coaches became available (many released from NX contracts lost at tender). Mr Warner's position itself would surely be untenable for just two routes!

Clearly, Greyhound's criteria is similar to Megabus' when choosing a location - students and medium to short distance from London. Bournemouth has bucket-loads of students as well as a very high population - especially when the urban sprawl of neighbouring Poole is taken into account. NX's London coach all commence/end at Poole, offering a further advantage to the stalwart, who offer single fares from £2 each way. Greyhound is reportedly offering a quarter of its seats for £1 + 50p booking fee.

Yield management-style inter-city coach services that provide a limited frequency along an already well-served corridor have flourished, though - remember Stagecoach's litmus test? It ran Megabus services in competition with its own Oxford Tube expresses between London and Oxford (admittedly the London terminal was different), before announcing it a rip-roaring success and going onto instigate many of the Megabus routes we see operating today.

Greyhound's USP (unique selling point) is the luxury afforded throughout its fleet - additional leg room, wi-fi as standard and complimentary papers not being something normally associated with budget coach services. It also has its renowned image, too. First operates its Greyhound services without registering sections as local bus services and so receives no Bus Service Operator Grant (nor does it have to accept concessionaires wishing to use their free travel passes) and can chop and change its timetable as much as it likes as it does not need to give the Traffic Commissioner's office the required 56-day notice to commence or withdraw a service. 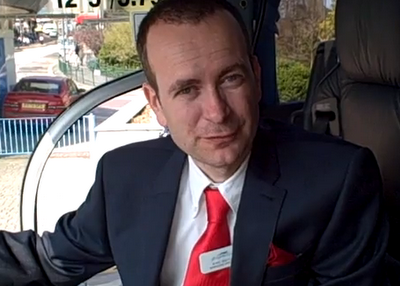 Greyhound's MD Alex Warner, who appears to be sporting a new-issue National Express tie!
We understand that a number of competing NX services betwixt London and the South Coast are also now operated in this manner, ensuring they remain as flexible to demand (and therefore potentially maximising profits) as possible. Using NX's Poole-Bournemouth-Ringwood-London service as an example, Poole-Ringwood is registered as a local bus service (17.6mi) and so is Hammersmith-London Victoria (4.7mi), totalling 22.3mi per single journey. Multiply this by 44 (total single journeys that comprise NX's 22 return trips) and Bus Service Operators Grant (fuel duty rebate) is payable on 981.2 miles *per day* or 355,194.4 miles per annum (based on 362 days' operation). The total amount is actually likely to be higher, as some of the anomalies to Weymouth and Swanage are registered as local bus services throughout their South Coast extensions beyond Poole, and services operate 364 days a year, though to a reduced frequency over Christmas and the New Year.

We calculate the fuel rebate on the 355,194.4 miles per annum to be in the region of £150-160k, or 103,333 Greyhound seats sold at £1.50. Clearly, it will take a lot from this two-journey, one-vehicle working to dent NX's profits on the Bournemouth-London flow. Despite this, I'm sure NX has a contingency of its own in place. Perhaps 'super fast' journeys that omit Ringwood, but since from here to Hammersmith their services operate direct anyway, how much would be saved?

I suspect NX's greatest concern is where next for Greyhound. First has a large operating base in Avon and the 040 (Bath-London) is one of NX's most profitable and frequent services - something First knows all-too-well, since they once operated the lion's share of services on this very route. I would be truly staggered if this wasn't somewhere near the top of their wish list. Perhaps the only thing stopping First is that they currently operate the Great Western rail franchise, also linking London and Bath. Some would argue they'd shy away from introducing a competing coach service, others would say that instigating Greyhound here would effectively see them corner the market.

Very awkward and uneconomic vehicle workings on the two trips a day on the Bournemouth route!