A great news story made it onto the BBC News website yesterday, that permission has been granted for the Peak Rail of Rowsley to extend its heritage train service into Matlock station, where it will effectively share the lengthy platform with East Midlands Trains' services to/from Derby and Nottingham.

Once completed next spring, it will be the first time passenger trains have departed north from Matlock station since the line to Manchester Central was closed to all services in 1968, a casualty of Dr. Beeching's "reshaping" of British Railways.

While the extension to services provided by Peak Rail will be just one mile south of the business' current southern terminus, it will make the link considerably easier to those wanting to board within the centre of Matlock. Many arrive by train from Derby and a walk of just under a mile to the heritage railway's Matlock Riverside station does put the more 'fair weather' steam loco appreciators off. 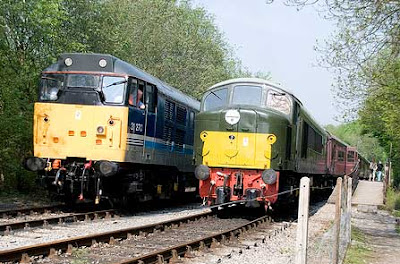 Matlock Riverside station is a small, narrow affair. It can be spotted on this photo, to the far right. Sharing the concrete with EMT in Matlock will be a massive improvement to all concerned
What took us both by surprise is that a one-mile stretch of line can be built in under 6 months. Surely Network Rail cannot be involved!

The section of line between Derby - Matlock - Bakewell - Buxton - Manchester formed part of the Midland Railway, which extended south of Derby to London along what is now called the Midland Main Line. Most of the trackbed north of Bakewell station is now cycle path, save a number of lengthy tunnels, to just south of Buxton - the whole line passing through the Peak District National Park.

Reinstatement of railway lines and train service along the whole section is floated from time to time but has never come to serious consideration. That said, Derbyshire County Council has pledged to keep the track bed free of development.

**UPDATE** From John, Derbyshire. I recently visited Matlock station and Peak Rail's metals actually overlap those of Network Rail, so there is no extension of such required, just slewing to do at that end. From an aerial photo, I'd say the walking distance between stations is not the mile stated, more 0.3 miles (500m). It would appear Peak Rail's PR man got a little carried away.