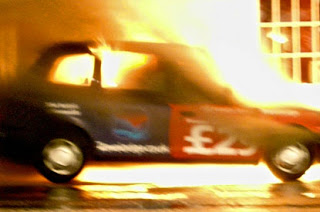 All the London papers (be it those you actually pay for or not) carried virtually the same story in their editions on Wednesday, that of a worrying number of black cabs catching fire, seemingly for no reason at all.

Seven 56-reg TX4 cabs have caught fire in the past 3 months and John Thomas, chairman of the Licensed Taxi Drivers' Association, is so concerned that he has asked the Public Carriage Office - controlled by TfL - to conduct an investigation. This has seen TfL instruct London Taxis International (LTI - the taxi manufacturer) to recall all September 2006-registered TX4 taxis, about 500 in total.

So serious is the problem that TfL has written to all owners of 56-plate TX4 taxis to inform them that if they do not have their black cab checked over their license to trade as a taxi driver will be revoked. There have been no reported injuries thus far, although fears have been raised with the result of some of the freak fires shorting out the electrics which prevent the rear doors from opening. This has been denied by LTI.

Also contained on page 28 of the same day's London Metro was news that the London Transport Roundel is 100 years old. We're happy to announce that this was reported by us 20 days earlier!!
Posted by LEYTR