The biggest shake-up of road signage for 40 years is currently being considered by the government, or so it revealed at the start of this week, when transport minister Rosie Winterton announced plans for a review into road traffic signage in order to ensure road signs were keeping up with the times and mirroring advances in electrical technology.

Road signs have remained largely unaltered since 1968, when the Vienna Convention agreed on certain principles for signage, adopted by all countries that form the United Nations. For example, triangle signs depict warnings and circles depict regulatory signs.

The review will also look at reducing the clutter some signage can give to streets and the countryside. In a recent edition of Top Gear, a viewer sent in a photo he'd taken of a junction just west of Stamford - just in the LEYTR area - when no fewer than 14 different signs 'decorated' the end of the A1 slip road as it approached the A43 at the Lincolnshire/Cambridgeshire border; and these 14 signs were for traffic in one direction only!!

Time may well be up for councils and companies who refuse to take down outdated signage and associated poles/frames. Along Victor Street in Grimsby, the local council helpfully erected two new bus stop poles at the junction with Cleethorpe Road back in 2001, except 6 months earlier buses on Service 7 (Riby Square-Bradley Crossroads) ceased to operate and hitherto that road has seen no bus service whatsoever, yet has two poles for bus stop flags and yellow road paint! Less than half a mile away along Oxford Street is a lone bus stop flag attached to a street light that Service 14 (Belvoir Road-Grimsby bus station) called at until 2001 when it was withdrawn without replacement. Better still, the flag displays the GCT logo (Grimsby-Cleethorpes Transport) and 15 years have passed since GCT was sold to Stagecoach. 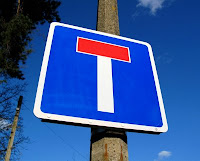 Announcing the review, Rosie Winterton said that "road conditions have changed dramatically over the years - and road signs need to keep pace with that change to provide the best information possible to all road users. It is vital we help motorists, cyclists and pedestrians understand how to use our roads - improving road safety and helping reduce congestion and CO2 - without cluttering our streets with unnecessary signs."

The first review meeting is likely to take place next month, with a loose strategy being agreed for next summer. Motoring groups have universally welcomed the review, commenting that confusing and outdated road signs do nothing to help reduce congestion and CO2 emissions.
Posted by LEYTR