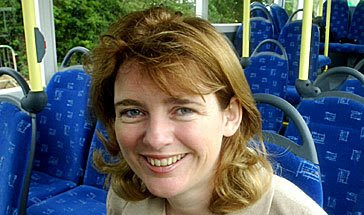 This made me giggle today. It's perfectly natural for the media to immediately suspect a major difference of opinion between Ruth Kelly and Gordon Brown, especially when Ms Kelly's resignation from the Cabinet comes less than 24 hours after a speech by the Prime Minister designed to show unity within the Labour Party and to instill a little confidence in its members, its activists and the general public during these financially difficult times.

Ruth Kelly was, of course, Transport Secretary, which is why the news has made it onto the LEYTR blog. One of the biggest problems affecting the transport sector in the UK is the forever changing person in the Number One position. There have been no less than 7 Secretaries of State for Transport in the past decade, two of whom have resigned from their posts.

Ruth Kelly had been regarded as a positive transport secretary during her time in tenure, certainly in the eyes of rail watchers. More recently, she'd come round to their way of thinking that perhaps another high-speed rail line was needed, or a least, increased electrification. She was the transport secretary who presided over the introduction of the free concessionary bus travel scheme in England and Wales, which despite concerns with operators over reimbursement rates, has proved popular with over 60s and is quite possibly a vote winner.

Could the resignation of yet another transport secretary do more harm to the transport sector than to Gordon Brown? Certainly reports are abound that she didn't agree with Gordon Brown's style of leadership. Perhaps when her memoirs are published in a few years' time we'll be able to see if the former or the latter was the case - after all the old chestnut of wanting to "spend more time with the family" is an excuse used ad nauseum so that the term itself causes immediate suspicion.

In the mean time the transport sector has to wait for yet another minister to be appointed and for them to settle into office, no doubt bringing their own views about yet-to-be implemented transport schemes in England. Take a look at the list of ministers who've been appointed to the Number One position in transport below; is it any wonder that progress is so slow??

Transport Secretaries in the UK during the last two administrations