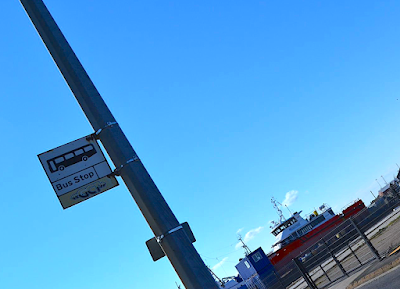 I do love an old bus stop flag. Sometimes they've simply been forgotten once an operator quits a route (such as Stagecoach in Peterborough when it withdrew Service 22 from The Deepings in 2011) and sometimes the branding on the, still operational, flag belies its lengthy and often complicated history. Take the flag on St. Martin's Without High Street on the 'wrong' side of the river in Stamford - it bares both an Arriva and, beneath, a Midland Fox sticker. Today, of course, it should bare Delaine and Mark Bland logos. A little further south in the Northants village of Kings Cliffe can be found a collection of RoadCar bus stop flags, dating from 1990 when the firm was awarded some school work in the county. How ironic that RoadCar flags remain in situ here when the company was never renowned for affixing them in general outside of Lincoln! Similar RoadCar flags can still be found in Grantham and Sleaford. There's a Coach Stop flag on the south side of the river at Langrick, and I've never been able to fathom which operator called there. This week's Grimsby reference concerns bus stop flags as there are still some that date from before the Stagecoach takeover a quarter of a century ago. Thanks to 'Grimsby Bus Chaser' on twitter for informing me of a GCT flag still displayed on a lamp post along the North Wall of Grimsby Docks. From here, peak-time Service 5X used to operate (an extension of Service 5 to/from Bradley Park).

I had the pleasure to know and work with an icon of the coach industry. Ronnie Monk, of Warmington, was one of those coach drivers who probably really HAD driven more miles in reverse than the average coach driver had forwards. With the natural wit required to ensure his coach load of 49 passengers always had a journey to remember and the ability to go his entire career without a blameworthy accident, he sadly died today. Latterly, Ronnie worked part-time for Stagecoach in Peterborough. He drove me and others to Showbus at the Imperial War Museum, Duxford in 2009. A photo of him and report of the event can be read here. Ronnie was an avid railway enthusiast and had a model railway in his back garden. He also once got Stagecoach's seat trimmer to recover his motorcycle seat in bespoke vinyl to look like it had been commissioned by National Express.

Stagecoach revealed today how some of its highly sensitive data, used to formulate its bid to continue running the East Midlands rail franchise, was mistakenly sent to Abellio by a DfT staffer. Whoops! With news earlier in the week that the Scottish transport giant now planned to appeal the DfT's decision to disqualify it from the bidding process and ergo awarding Abellio the gig, little snippets like this will no doubt be revealed as time goes on. If the DfT has screwed up the awarding of the EM franchise there will be the mother of all legal and reputational battles ahead. As Virgin showed in 2012, the private transport companies know their business far better than the DfT does and the only right and proper reaction from the DfT, should it have fallen foul of the mark *again*, would be the resignation of its Secretary of State.
Posted by LEYTR

The EMT leak apparently came from Network Rail, not the DfT, although it begs the question of what Network Rail were doing with such sensitive data (or, if it wasn't sensitive data, why Stagecoach are allegedly being arsy about it). Time will tell what effect it will have, although I'm sure you remember the rumours about Stagecoach being desperate *not* to win the new franchise!