Once again the LEYTR visited Showbus at Duxford. We happened across someone who featured highly from last year's visit - Stagecoach driver Ronnie 'Number 1', who posed for photos after parking his open-top Bristol FLF into position. There appeared to have been a switch around as this vehicle was the 1966 entry to celebrate 60 years of Buses magazine; on paper, the vehicle's closed-top sister was shown. 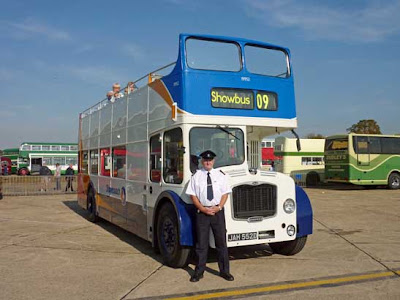 Ronnie - still caring in 2009! Stagecoach in Peterborough's Bristol FLF Lodekka deputised as the 1966 entrant in the 60 Years Line-Up after its closed-top sister from Northampton failed to make it.
The weather was nothing short of perfect for the rally today; the best Showbus weather I've ever experienced. Blue skies throughout and decent warmth from the sun. Going back about 4 or 5 years, you could always be assured a deluge or two at Showbus. It's quite possibly the 'up' side of global warming: Indian summers.

Not being in possession of a spare battery for my new camera, attempting to photograph all the 500+ vehicles in attendance would prove an impossible task. So for the first year ever I concentrated solely on 'fotting' the vehicles entered by operators in the LEYTR area as well as a selection of those that took my fancy from elsewhere in the UK.

If I'm honest, Lincolnshire and East Yorkshire has been better represented in previous years, though a bumper crop of Hull vehicles was to be found as well as a late entry by Lawton's of Stickney. Sleafordian have obviously chose not to sell their Neoplan single-deck coach and instead paint it in a very attractive and executive-looking all-over black livery and a Leyland Olympian new to Lincoln City Transport (I made a contribution towards its restoration) even formed part of the 1949-2009 line-up. 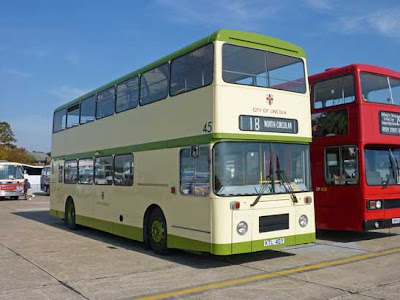 Preserved immediately upon withdrawal from RoadCar's Grimsby depot a couple of years ago is this Leyland Olympian/East Lancs decker, new to Lincoln City Transport in 1982. Its owner sold a large quantity of ties to myself, with proceeds helping to restore KTL 45Y to her former glory. The only obvious item missing is the skinny dot matrix destination box, fitted from new.
Arriving in a bus and being directed to our parking space seemed to take an absolute eternity this year. The queue itself was no longer than usual, it was the long periods of standing still within the site that took up our time. With an extension to the Imperial War Museum taking place at the eastern end, the vehicles normally parked there had to be somehow accommodated in the main bulk of what is the exhibition area, which was proving a tight and congested fit. 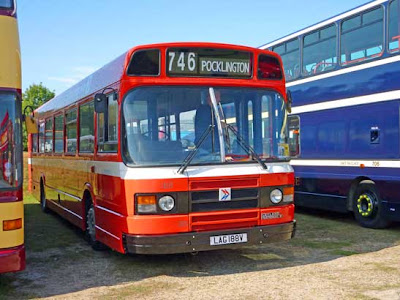 Hull Bus Restorers have owned ex East Yorkshire Leyland National Mk2 LAG 188V for a number of years and have entered her in numerous rallies. This year, she formed part of the special Hull line-up, with three KCHT vehicles next to three vehicles new to EYMS.
By the time I alighted from my vehicle (m'colleague wasn't able to attend this year), it was near as dammit 11am. With a departure at 5pm, this left only six hours to do everything. For what I plan on doing, this is simply not enough time! As ever, I commenced with a preliminary sweep of the stalls and spotted a few ties to 'bag'. It frustrates me that some of the most attractive, modern tie designs are only available as clip-on examples. Operators such as Trent Barton and Ipswich Buses only seem to have this type available now. I really hope it's not a sign of things to come, with 'elf' and safety dictating the end of the self-tied Windsor Knot.

Incidentally, if anyone has a current Trent Barton +/or Nottingham City Transport tie that is the traditional tie-up style, please email the Editors direct and I'm sure we can do business! 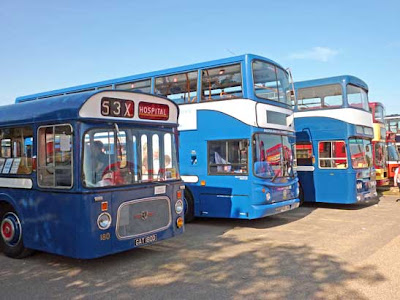 (l-r) Leyland Panther GAT 180G, Dennis Trident 2 YN06 LMM, and Leyland Atlantean TKH 270H, all wearing Kingston upon Hull Corporation Transport livery. The line-up is especially poignant since the city celebrates its 110th year of continual public transport service.
In previous years, prominence is given (be it accidentally or not) to the Routemaster. They're grouped together and parked in a nice linear fashion facing the runway. This makes it easy for them to all be captured on film as they're facing the sun (decent shots then!) and you simply walk four paces from vehicle to vehicle to 'fott' each one. Notwithstanding those people who seem to want to inspect each vehicle's chassis number, you can bag about 70 vehicles in 15 minutes.

This year, however, prominence in this area was given to the special 60 year vehicle line-up and the RMs were downgraded to the main exhibition area where they were parked haphazardly on the grass, with many un-photographable due to the sun. My photo collection this year features significantly fewer RMs than ever before. 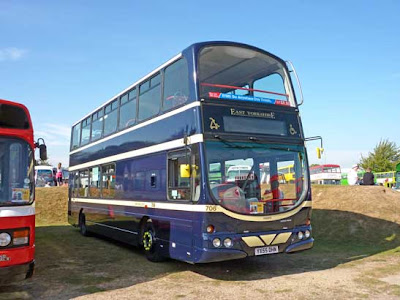 EYMS sent a vehicle along, as ever, on this occasion a Volvo B7TL/Wrightbus Eclipse Gemini wearing a commemorative livery.
At the end of the special BUSES magazine 60 year commemoration line-up was one of the newest Van Hool Astromega double-deck coaches branded for the Oxford Tube that Stagecoach has been drip-feeding onto its flagship service since August. At the helm was the irrepressible Malcolm Crowe, of the Oxford and Chilterns Bus Page. As I met Malcolm, he was busy showing the judges round his rather impressive vehicle - not long since collected from the Van Hool factory. Later in the day, the coach won the Best Post-1990 Stagecoach Bus Award.

If I'm honest, aviation doesn't interest me at all, so I seldom enter the War Museum, though having reacquainted myself with some friends, ended up following them to see Concorde. The last time I saw Concorde here was in 2004 when she posed for shots next to RM1 - shots I later lost in the Great Hard-Drive Crash of the same year. Concorde most certainly is a fascination piece of machinery, so small and precise, yet looking that little bit outdated at the same time. 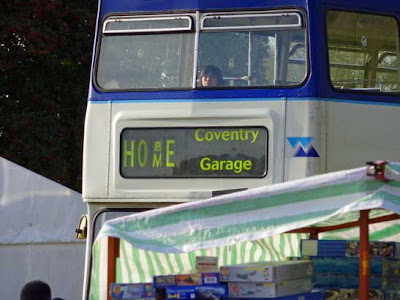 My favourite shot of the day: a National Express West Midlands MCW Metrobus joins the queue for home.
Talking of vehicles that were the first of their kind, RT1 was in attendance and posed with the main sale stalls throughout much of the day, helping its proud owners raise money to help keep it here in the UK and not to be sent back to the dastardly old USA. Looking at this quite obvious iconic vehicle - who celebrates her 70th birthday this year, I mused on how much of RT1 was original 1939 stock! Not a lot. 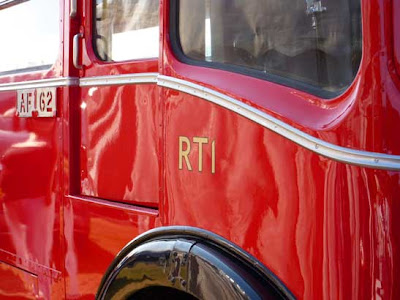 LEYTR operators A&P Travel brought their two 'mainline' coaches to the event as ever, making it a social event for their families, friends and regular holiday-goers, and in keeping with tradition, made sure they didn't leave empty-handed, winning the Best 1990-99 Single-Deck Award for one of their DAF/Van Hools: V20 APT. 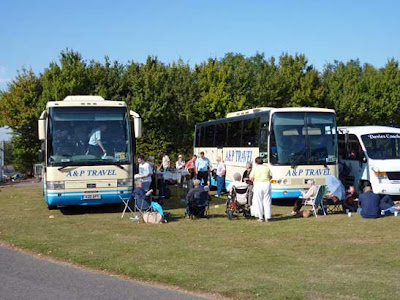 Perhaps some of the least-travelled vehicles to Showbus was the pair of bio buses Stagecoach operate from its relocated Huntongdon depot - about 10 miles up the M11 in the former Whippet premises at Fenstanton. These, along with the brand-spanking-new Volvo B12BT in Megabus livery for service out of Rugby depot, were parked perfectly for photographs throughout the day. A little better than a row of buses - in which three vehicles from the LEYTR area featured - were at the most northern extremity: Kimes and Delaine Buses' entrants. At no point were the fronts of any vehicles in this line facing the sun. There was absolutely nothing to stop the organisers rearranging the parking here to be 180 degrees in the opposite direction. 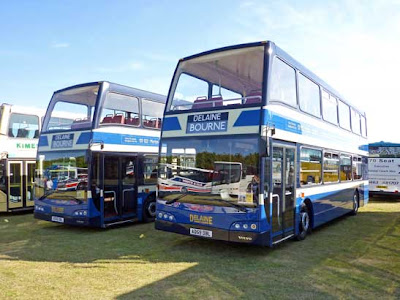 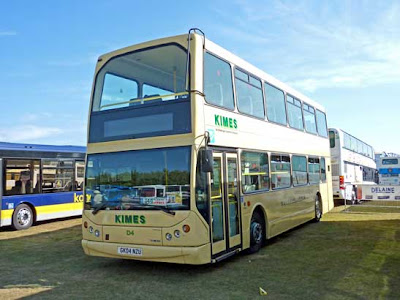 I had to touch up both the above photos since they weren't parked in the most helpful of locations!
Also in the same area - though facing the sun - was Fowler's entry: an ex Lochs & Glens tri-axle Volvo B12BT/Van Hool coach - of the same batch as that entered by Lawton's. Both looked very impressive indeed. 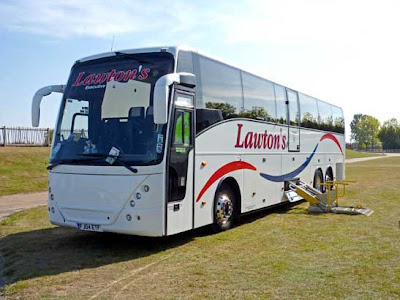 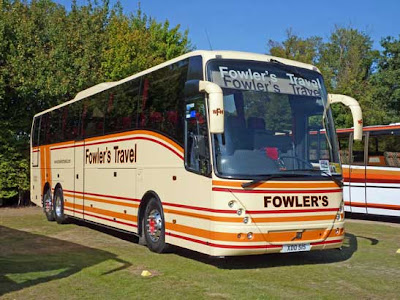 Centrebus' Grantham depot sent a vehicle again this year, looking resplendent in its brightly-coloured orange, white and dark-blue livery. Wearing a similar proportion of orange was the ex Grimsby-Cleethorpes Transport Leyland Tiger/Alexander P, now with Stanways of Kidsgrove - the second consecutive year E930 PBE has been entered. One of her first duties when new was to operate the short-lived 45X Immingham Flyer service in 1988. 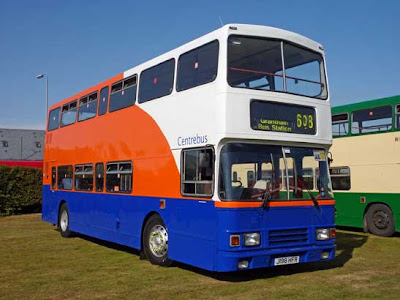 Mick Rolley had brought Lincolnshire-liveried Bristol Lodekka OVL 473, a resident at the Lincolnshire Road Transport Museum - this vehicle is no stranger to Showbus!

All in all a most satisfactory day - until it turned time to leave. The queue was horrendous. I prefer to travel to Showbus using operators who choose a reasonable time to depart. Those who say any time between 1630-1700 end up queuing for around 45 minutes before reaching the M11, so last year, Stagecoach in Peterborough's sensible 1730 departure time served us well - we glided out and were trundling up the M11 at 40mph within five minutes. 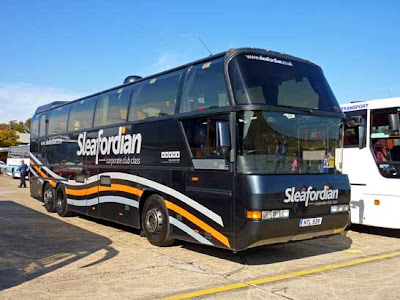 Sleafordian had this Neoplan coach for sale for some time, but have chosen to retain it and apply a rather swish, executive look to it. The company have come on significantly in recent years - including a new-style fleetname, too.
No doubt preparations are well underway with planning 2010's event. Privately, we were told (some weeks ago), Showbus' organisers were a little concerned that the recession and the start-of-September hike in fuel prices would mean a significantly reduced number of entrants would turn up; this simply wasn't so - and with the glorious weather in so many people's minds, I'm hopeful of yet another bumper year of vehicles to come. (GL)