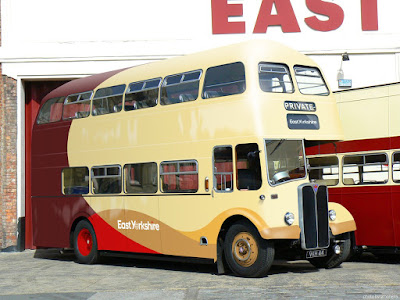 I missed the now obligatory April Fool's Day spoofs due to work commitments. Having trawled the internet recently for the latest buses in the East Yorkshire fleet to be repainted, I came across one concerning this Hull-based bus and coach operator. The company's historic AEC Regent V, 644 (VKH 44), new in November 1956, has been treated to the Best Impressions-designed livery and brand that was rolled out by the company in March. While clearly a mock up, the Willowbrook-bodied bus, designed with a roof that ensured it would pass under the Beverley Bar in the Minster Town, looks surprisingly well; at least that's what I think. VKH 44 features on the front cover of the LEYTR this year, being overtaken by a red Peugeot car, whose untraceable owner is surely unaware of the 'fame' his car is receiving this year.

Reading about the withdrawal of the Heritage RM service in London from 1 April was no joke. In order to plug TfL's coffers by around £800,000 annually, and with patronage in decline, the additional short journeys on Service 15 from Tower Hill to Trafalgar Square via St. Pauls, operated by Stagecoach London, were no more from this date, except during weekends during the summer and on bank holidays. Ridership may have been in decline, but I fear withdrawing the RMs from regular operation is like the Shard preventing tourists travelling to its summit on weekdays. The Heritage RMs cost £1.2 million a year to run, but their wider value to the London economy must surely be a consideration. Wrightbus's 'New Routemaster' is a fine enough vehicle, if a little possessed by modernising the past rather than evolving it, but American tourists do not build into their itineraries a ride on them; yet the Historic RMs feature very highly, regardless of whether the traveller has any knowledge of UK buses or not. And the surest way to kill of patronage of anything is to withdraw it without replacement.

There will be many queries passengers who use the current East Midlands Trains network will have concerning just what Abellio has planned - especially in Lincolnshire, which was omitted from all the summarised headline improvements released today jointly by the DfT and Abellio's PR people. We know from the ITT, issued last year, that there will be frequency enhancements and that capacity will also be significantly increased on services that currently operate with single-car Class 153s, but thus far very little else. It was interesting to note that "all stations" will be fitted with ticket machines. How many years will a ticket roll last at Havenhouse, one wonders?
Full details, as soon as they are known, will be published and analysed in the next LEYTR. Yet while those in Abellio were jubilant at being awarded another UK rail franchise, it occurs to me that there has hitherto been no mention whether the offerings put forward by disqualified applicants Stagecoach and Arriva were any better. Has the East Midlands been indirectly awarded a franchise that may, in other circumstances, have been considered sub-standard? Was Abellio's award purely to save face at having to scrap the franchise process and start again and NOT because it happened to offer the greatest benefits for passengers and the region in general regardless of the fact that the Dutch state railway didn't mess its sums up with its financial obligations to the staff pension pot? We are currently starting a ten-day 'standstill' period, so more will gradually be made known soon.
I'm not entirely convinced that the DfT is completely up to the job of late. A lengthy and protracted legal challenge - or two - would be the last thing it needs in the current climate, where rail is constantly under the spotlight following last May's timetable chaos, the introduction of new trains behind behind schedule, awarding a ferry contract to a firm who doesn't possess any ferries and knowingly awarding the InterCity East Coast franchise to VTEC knowing their bid was unrealistic to name but a few high-profile foul-ups.

The March/April edition of the LEYTR has been posted out. Since our previous secretary relinquished his position at the end of last year, the remainder of the Committee have adopted an 'all hands on deck' approach to ensure the timely distribution of the magazine. In this edition we commemorate 60 years since St. Mark's Bus Station opened in Lincoln, with an exclusive by our Chairman and RoadCar MD Paul Hill surrounding its demise. We also detail all the very latest bus, coach and railway news, with details of forthcoming railtours and local bus/coach rallies. We have a bumper section looking at local bus and coach operator fleetnews, while the railway equivalent details the latest Northern repaints and ex-ScotRail '170' acquisitions. Full fleet lists for Black Cat Travel of Lincoln and Sleafordian Coaches of Sleaford are included and we detail some of the major railway service improvements from the May timetable change.
Posted by LEYTR