London & Back for the LEYTR

A planned feature in the next LEYTR magazine unusually saw me head to London today. It's the first time I've visited our capital city for some months and got quite a shock when I arrived at Peterborough station. Not the alterations to the entrance area, but the following sign displayed in the car park. 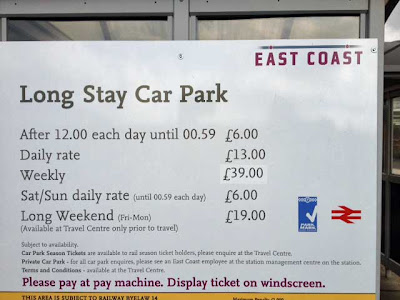 Your attention is drawn to the purple writing at the bottom. A ticket needs to be displayed! Well, no one else was, so I chose not to either. The car park set-up appeared to be unchanged, save this sentence on the tariff board. I actually took the photo to show how expensive Peterborough's station car park is. Is there any other station car park in the UK that can rival the standard £13 per day fee? 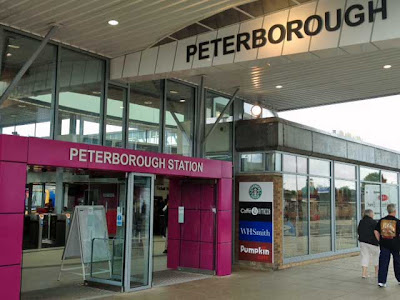 To the new-look station entrance and East Coast's purple colour scheme is clearly in evidence here. As one person commented to this photo when I uploaded it on twitter, Barbie Rail lives on! However, despite the need for sunglasses, the station is massively improved on its former self. Although the dwell area within the main entrance has been significantly reduced with the installation of ticket gates further towards the main entrance - and the number of self-service ticket machine has been cut by at least half - the space works well. People are forced to make a decision to either use one of the two cafes; to pass through the ticket gates and onto the platform; or to use the travel centre. 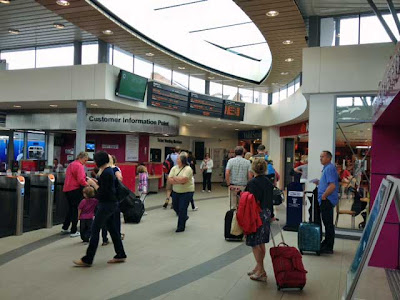 I paid £34.50 for an 'any permitted' Travelcard. A cheaper version is available if you wish to use First Capital Connect to/from London. For a change I wanted to use East Coast as they have 240V sockets and free wifi. I've recently invested in an iPhone and seem to spend my life topping its battery up. I caught the 1004 departure, operating as 1Y17, the 0755 Newcastle-London King's Cross. Some of my friends would have let this go as it was a HST. Leading was 43314 with 43330 Craigentinny at the rear. We left a couple of minutes late but arrived at King's Cross on time.

I'm not adept enough to be able to spot the difference in traction type just from the sound, when in a carriage doing 125mph along the Up Fast. I'm guessing there is one, though. I had a Class 91 on my return and couldn't for the life of me tell a difference. There are probably subtle differences in how the Mallard interior is applied to Mk3 and Mk4 carriages, but on sound alone I couldn't tell.

With the revamped King's Cross station, it is now possible to take photos like this: 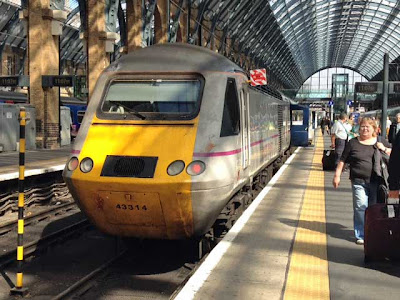 Lots of natural light streaming in from the rejuvenated roof. Has this station ever looked so airy? Less so, for obvious reasons, was the southbound Victoria Line platform on London Underground. I only went a couple of stops before alighting at Victoria to drop a package off with a mutual friend that will enable next year's front cover photo to be taken. From here I had some time to kill before my reason for visiting so I headed to Elephant & Castle to sample one of Abellio's hybrid ADL Enviro400H double deckers, which entered service on route 188 (North Greenwich-Russel Square) in January. Similar to examples operating with EYMS in Hull, the buses don't have a gear box, with the engine making a progressive, continuous noise. It offers a much smoother journey, though the driver told me the rev counter acts as if he was driving a bus with a standard gear box.

During the Olympic Games, Russel Square is being occupied by Stagecoach, who are attending to every whim of the global media, who are based there. Consequently, Service 188 is operating to Euston Station on all journeys. 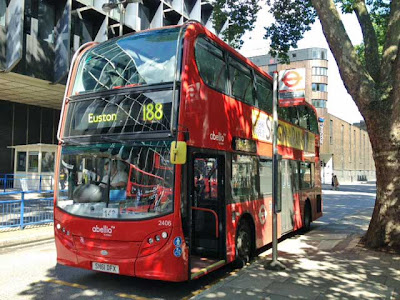 I got off at Holborn and walked to Cambridge Circus to catch Arriva's Service 38 to Dalston Junction station. The last time I visited London I caught this service, aboard LT1 - the original 'Borismaster' or New Bus for London. I saw LT4 & LT8 in service today, though caught neither, boarding a rather sluggish VDL/Wrighbus Eclipse Gemini. The (unadvertised) air chill seemed effective at the front of the upper deck as there were vents here above the seats, though no such luxury elsewhere in the upper saloon. We made good time, though, and I was only on board for 18 minutes.

I met with a friend and LEYTR subscriber at Dalston Junction and came to do what I needed. It's the first time anything of its kind has featured in the magazine - a full page being devoted to it in the next edition. I also had a ride to New Cross and back aboard one of London Overground's Class 378 emus. From memory, it was here at Dalston Junction where the very first train, on the very first day of the new service accidentally passed a signal at danger - with the UK press and LOROL top brass in evidence. 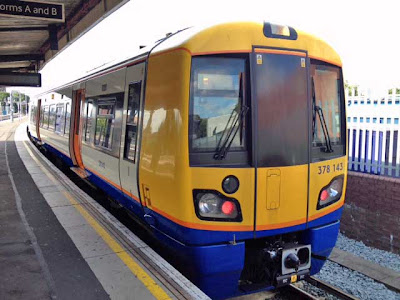 It was now time to head back and I found myself in the unusual situation of being able to choose from any East Coast departure bound for Peterborough. Usually, we'll catch FCC as a number of journeys offer journey time not much longer than EC's. I headed north aboard another London Overground '378' to Highbury & Islington and then one stop on the Victoria Line to King's Cross St. Pancras. As I arrived there were three East Coast services boarding: the 1720 to Hull, the 1730 to Newcastle and the 1735 to Leeds.

I chose to let the Hull go as it didn't call at Peterborough and the Newcastle looked very busy. No, the Leeds would do me - fewer stops and more chance of being able to get a window seat to charge my iPhone...again. Except I momentarily did something I've never, ever done before - with all my years of rail travel - I boarded a train which did not call at my destination. The 1735 omits Peterborough, stopping first at Stevenage then fast to Grantham. It wasn't until the guard made his announcement that I thought I'd better get off! 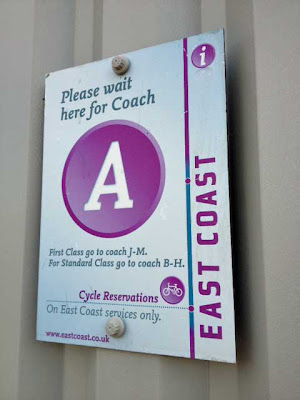 Taken at Peterborough is this sign directing passengers where to wait if they wish to travel in (or their seat reservation is in) Coach A. Yet, East Coast has dispensed with its Coach A for some time. That said, my southbound HST had a Coach A sticker at the other end of Coach B, where the train office is to be found.

The next EC was the 1800 to Newcastle followed by the 1805 to Leeds - only the latter calling at Peterborough. I was very surprised how few EC services call at Peterborough on a Sunday evening from London. Admittedly, Peterborough receives two additional trains per hour with FCC - the journey time is longer but the ticket prices cost less. There's something of defeatism when you catch a FCC train yet have paid for a ticket that allows you to travel on the faster, more expensive alternative. So, I was in King's Cross for effectively 1 hour, choosing to let the 1730 Newcastle go. I blame Apple for not inventing a battery for their iPhone that lasts the day. 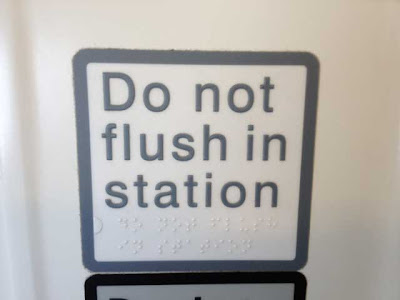 The last time I looked, it cost 20p to spend a penny at King's Cross. It's free on board a train. But you can't flush the train loos at stations. We can hold the most successful Olympic Games ever yet still have trains without effluent tanks.

Our conductor on the return was a very jolly soul - he rolled his Rs like I've never heard before. Enigmatic. 1D26 was the train - booked to be a HST, though in the event it was a Class 91. Some of my friends would have been very pleased! We arrived 4 minutes late into Peterborough and I headed to the car park to see if I could pay for my parking upon my return. And I could.

It was a very enjoyable day. It's unusual for me to just hop on a train and purchase a ticket to suit. The likes of Barry Doe constantly extol the virtues of this, often, in my opinion, exaggerating how many people actually want to do it. But today I did - and it went very well indeed.
Posted by LEYTR

for reasons unknown, Reading does not appear in the listing on FGW's website.

Very nice station for passengers and travellers. It's good to see car parking fare list for short stay and long stay that will be really helpful for travellers. cheap airport parking