Like many people who write about and travel on public transport, the LEYTR has its own twitter account which was started as long ago now as 2009. In the past year or so Twitter has exploded with popularity, with virtually every conceivable organisation having an account. On some of the most popular TV shows, a suggested hashtag phrase is shown on screen in order for those exclusively using Twitter to further the debate.

But there have been a number of news stories featuring Twitter users flouting the law. The most recent was when a Welsh student was given a custodial sentence for posting racist remarks following the sudden heart attack of a black football player.

With a recent survey suggesting that a quarter of the 200,000,000 tweets sent daily are simply not worth reading, it clearly lures some tweeters into the false sense of security of relative anonymity. There's no way of knowing precisely without trawling every tweet sent from the LEYTR account, but I'd guestimate that around 15% of tweets aren't responded to, though this doesn't mean they're not forwarded, or 'retweeted', or not read at all.

It is retweeting that gets users in hot water. Take an instance that happened yesterday. Musician Julius Schiazza tweeted the following (click to enlarge):

Virgin Trains, like any responsible company who employes a number of employees to maintain their own Twitter feed, trawls the 'tweetisphere', looking for other users who've mentioned their company name in a seemingly random tweet. Their response to Schiazza's tweet was (click to enlarge):

This struck the right tone. It also illicited a reply by the potential fraudster himself, who admitted to having paid up in the end. I can't think VT informed the train manger in question as no details of the train being travelled on were given, though from Schiazza's Twitter profile he lives in London/Cheshire, so it could be narrowed down.

For those wanting to see more potential entries in the Darwin Awards (shooting themselves in the foot) an excellent Twitter account to follow is Scrote Catcher (@ScroteCatcher). Working with businesses throughout the UK, the account holder retweets messages that people have sent detailing their fare evasion. Often these people post using their real name and have a photo of themselves.

As for the "Excellent prosecution rate to date", I suspect not. You need to be caught in the act for a prosecution to be levied, and even this is not dished out in the first place; you have the option to pay the fare plus a fine first. I suspect where the Scrote Catcher comes into its own is as an information gathering media: perpetual fare evaders tweeting their accomplishments soon become cocky (cockier?) and perhaps details of their travel movements can be gathered and put to good use in the future?

Look at some of these tweets retweeted for anyone who follows Scrote Catcher to read: 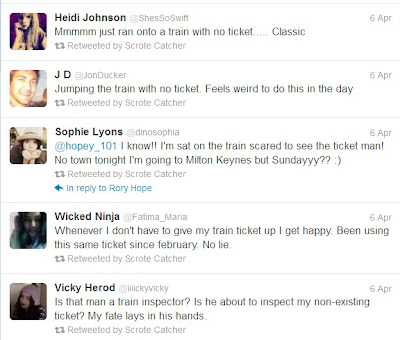 Excellent idea. I look forward to the day someone tweets "Found fare dodger, stamped their face into the floor and stole their wallet. Well, they started it by stealing from me"

Fair's fair after all !