There weren't many high points about attending the recent Cobham Bus & Coach Rally. The weather was awful and the facilities on offer were poor. Torrential rain and strong winds will always see fewer entrants and visitors - I even considered turning the alarm clock off and going back to sleep when I took a look outside - but the organisation of the event fell very short of that which regular attenders have become accustom.


Not only did your entry fee to the site no longer afford you free entry to the new London Transport Museum (now that it's been re-housed), but free shuttle transport wasn't offered to take you between both sites, as had become customary for many years previous.

However, the event did give me the opportunity to finally catch up with the New Bus For London - the Routemaster fit for a 21st century London, often referred to as the 'Borismaster' on account of it being sanctioned by the current Mayor of London. Two have been produced thus far: LT1/2 (LT61 A/BHT) and are a special commission awarded to Wrightbus of Ballymena. From what I have read, LT2 was the first of the duo to enter regular passenger service with Arriva London, operating Service 38 (Victoria-Hackney), with LT1 making regular return trips to Northern Ireland for modifications.

LT1 also made a visit to the UK Coach Rally at the East of England Showground in Peterborough last week. It also made it to Cobham yesterday and is seen here taxiing along the now decommissioned Wisley runway. A nice shot - very untraditional. It proved unquestionably the biggest hit, despite both RT1 and RM1 being in attendance. A very much appreciated photo shoot took place in the early afternoon, with RT1, RM1 & LT1: 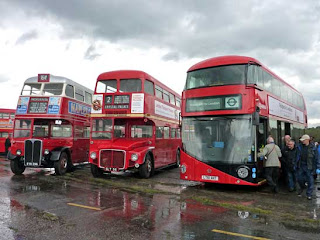 And by this time, the rain had stopped. Quite an iconic shot and if nothing else it demonstrates how much bus design has changed over the past decades. It makes me wonder what the latest revolutionary bus will look like in 2050!
Posted by LEYTR

LT1 was delivered first but only did promotional duties before returning to Wrightbus. LT2 came second and was the first bus into service. LT1 then joined it in service. The third bus delivered about 10 days ago was LT6. No further buses have been reported as delivered.

Although M-F operation was the initial plan the vehicles have been spotted in service over the last couple of weekends.

I am glad that Boris won the Mayoral election as it means tat we can see more of these wonderful vehicles matching as they do the iconic Routemaster Well done Boris a great vehicle!

I really loved the picture comparing the buses over the years.

My blog on rail fanning and travels on Indian Railways

These buses are absolutely horrid. Claustraphobic interiors, extremely hot inside (good for winter only), and does not one thing the current generation Wright/Alexander Dennis/Scania/Volvo buses can do at half (or more) of the cost this vanity project for Boris Johnson can offer and do it Better! Just shows when a Tory dabbles in public transport and knows absolutely nothing about it except dewy eyed nostalgia for a bus type that should've been gone by 1980 this is the result it's not what is needed and not what London council tax payers should be paying for. Does NB4L make my so called high frequency services run better? - no I sometimes wait 20-25 minutes for two buses that should operate 8-10 min and 12-15 min frequencies because London Buses stitch up contracts with particular operators. Does it make Countdown more reliable? - no way so maybe if Mr Johnson actually knew something about improving bus provision he'd do things which made it more reliable and improved what we have no rather than a vanity project we don't need. Personally I don't care what type of bus it is as long as it's reliable, runs on time and clean. Final comment the ONLY reason Johnson withdrew bendies was due to his pet middle/upper class cycling chums who think anything/everything (including pedestrians) are in their way of achieving a record time akin to the Tour de France got wiped out when riding within inches of them. If they had some manners not many would've done. But these cyclists have absolutely no manners especially to pedestrians. BTW I don't own/drive a car!