There's been a lapse of activity on the blog, though I'm back now and bring you one of the best rail websites I've ever seen. Thanks to a LEYTR subscriber for pointing me in its direction, it really made my evening.

www.trains.im offers a very basic landing page, on which you can only input start and destination points for travel within a two-hour window on the date of your choice. You can only select a direct journey. Click search and all possible journeys within you pre-defined data are shown. 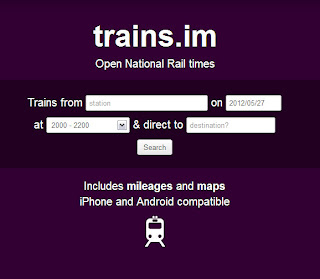 I've typed in from Cleethorpes to Sheffield on 29 May 2012 between 0600-0800 and two results are shown, listed by departure time. Also shown is the train's headcode and likely departure platform. This in itself isn't unheard of as Network Rail's live train departure application details platforms, but less common is the headcode.

Choose a departure by clicking its headcode and then click 'detailed' in the top right of the new screen. This is where I sat back in amazement. For initially all stops are shown for the whole journey, from Cleethorpes to Manchester Airport, rather than my selected station, Sheffield. I chose 1B67, the 0618 departure, and the 'detailed' version shows the working timetable, with all timed locations along the route length.

I've unofficially seen data like this before when visiting a friend who supervises a railway station, though the data he used didn't seem as accurate as this! The detailed timings show passing times to half-a-minute as well as mileage from end to end.

It really is a fascinating website for the rail novice like me. Clearly those who work within the industry will have seen this before, or a version of it, but for it to be available to the general public is a great step forward.

Using the basic and simplistic Arial font, the user interface is incredibly straightforward and effortless. You can tinker away to your heart's desire. As I'm still doing, hours after discovering it. Keeping up-to-date with society, the site loads very well on smartphones, too.
Posted by LEYTR

Thank you for your comments on my site!

I'm always open to ideas and feedback - but I'm glad you find it useful.