Despite the weather forecast to the contrary, a very warm and sun-filled day was had by all at this year's Showbus bus and coach rally, at the Imperial War Museum, Duxford. It is the only rally I've been to other than the Easter Sunday gathering at the Road Transport Museum near Lincoln. I feel rather guilty that I've not attended more, but life is like that some times.

Midweek, the weather forecast was for prolonged rain, but by Saturday evening this had been moderated to heavy showers. As it happened, it stayed dry throughout my stay. A massive improvement on the washout that was last year. It was also a bumper year for additions to my tie collection, though that is another story.

As with other years' visits to Showbus, I have uploaded a selection of photos that took my fancy. Many of them are of operators local to the LEYTR area who attended. A full round up of all vehicles in attendance from our area will appear in the next edition (due out at the end of the first week in October). 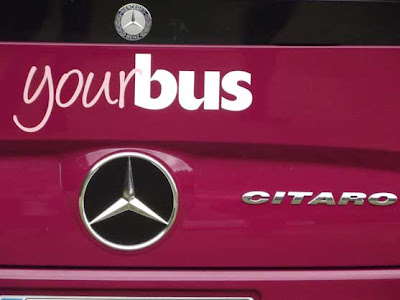 The Dunn Family's Yourbus company has recently purchased some new Mercedes-Benz Citaros, one of which was in attendance, looking resplendent in its revised livery. 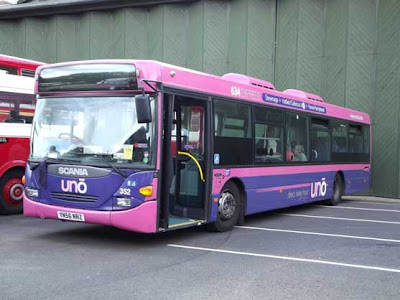 Uno is the rebranded UniversityBus operation, based around Hatfield. One of their Scania OmniCity single deckers was entered, with ties adorned from the windscreen wiper. 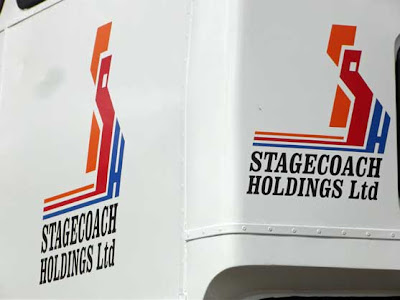 Completed just in time for Showbus, though having first meandered into the LEYTR area on 3 September on an enthusiast jaunt, is one of the original Megadekka-branded Leyland Olympians that Stagecoach pioneered in 1989. Wearing its original branding, the buses carried Stagecoach Holdings Ltd branding. 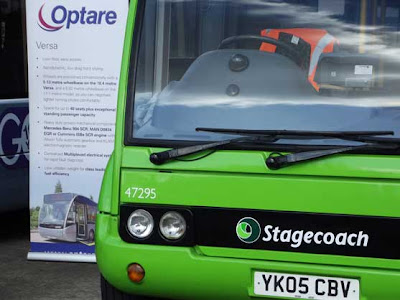 Normally an 05-reg Optare Solo wouldn't command pride of place at Showbus, but then this Solo, operating with Stagecoach in Lincolnshire, has recently undergone conversion to operate using biomethane gas. 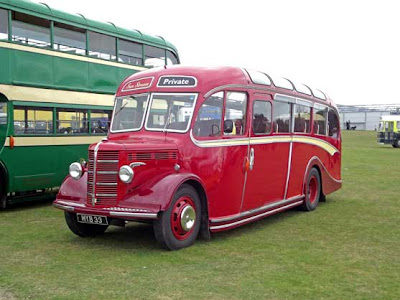 This Bedford OB with Duple coachwork is based in Lincolnshire and entered by Stuart Jones, of Bus & Coach Buyer notoriety. 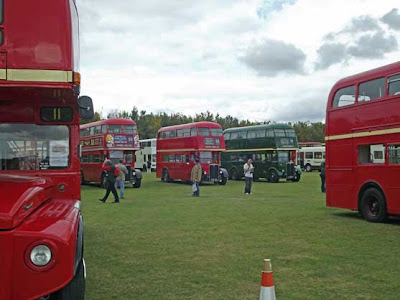 I made a pledge to myself not to get too hung up photographing RMs and RTs, so this is as close as I got to them: two RMs frame three RTs. 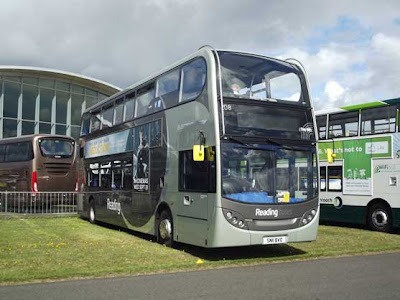 I've never photographed any bus in the Reading Buses fleet - something the LEYTR Stagecoach correspondent will grimace at. To make amends, here is my first attempt. Has Ray Stenning been let loose with their branding? It looks very striking. 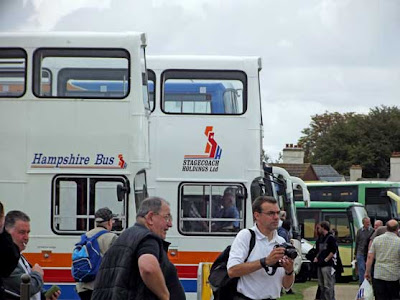 Crowds galore. Most people were equipped with at least one camera. It is heartening to see so many people photographing buses. The recently preserved Megadekka was parked alongside a standard-length Leyland Olympian and branded for Hampshire Bus. 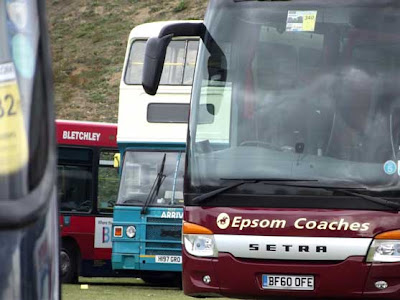 Quite a selection of vehicles were parked together. Areas of hitherto used runway were out of bounds this year, so vehicles were crammed together in other areas, though not too close to cause problems with photography. 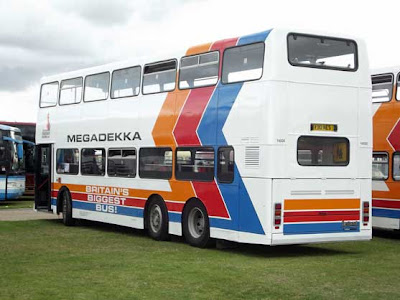 A rear photo of the Megadekka-branded Leyland Olympian. It was new to Magicbus and operated at East Midland's Mansfield depot before ending up at Bedford - where it lost its branding. 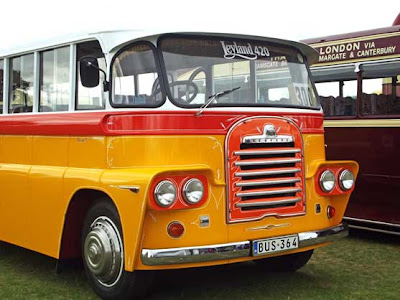 I mused on Twitter that perhaps the most-travelled vehicle was one of Stagecoach in Caithness' Plaxton-bodied Volvo B9Rs, branded for Service X99 (Inverness-Thurso), but moments later I spotted this Leyland 420 all the way from Malta. 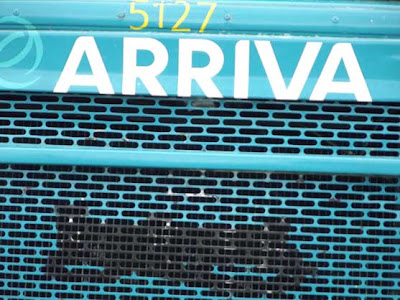 Someone has stolen/removed the Leyland badge from this ECW-bodied Olympian in Arriva livery. 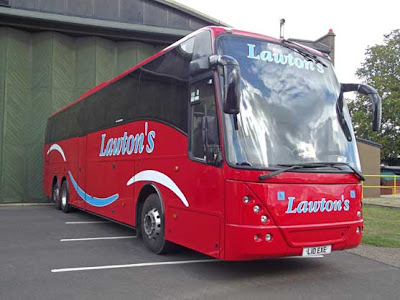 Lawton's of Stickney entered this ex Lochs & Glens tri-axle Volvo/Jonckheere, which has been modified to accommodate wheelchairs. 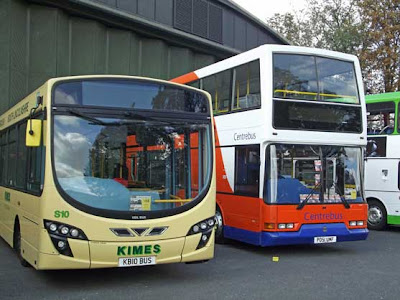 Side-by-side, under common ownership, is Kimes' entrant and one of Centrebus' trio of vehicles (all Grantham based). Recently the 'an employee owned company' lettering has been removed from Kimes vehicles. 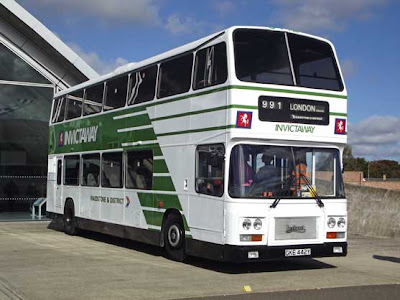 A large number of vehicles from the Maidstone & District fleet were grouped together. Of interest was this Invictaway-branded Leyland Olympian/ECW 'decker, dating back to 1983. Invictaway was the name given to commuter services between Kent and London. 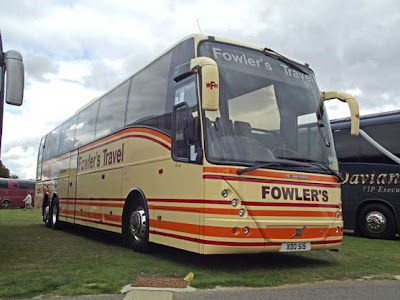 Fowler's Travel of Holbeach Drove are regular entrants to Showbus. This year saw one of their ex Lochs & Glens tri-axle Volvo coaches with Jonckheere bodies attend. 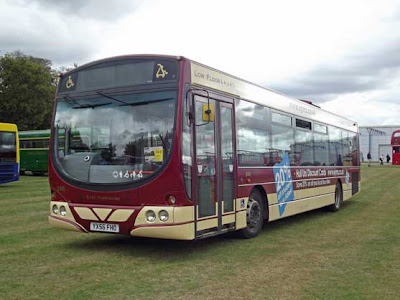 EYMS send a vehicle every year. This time a standard Volvo/Wrightbus vehicle was entered. I'd have preferred to see one of their new hybrid Enviro400s. 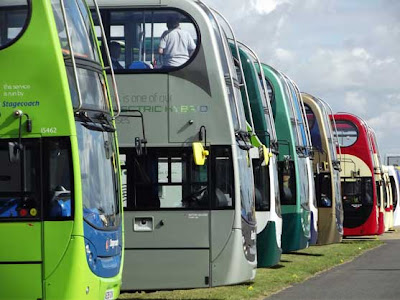 Talking of Enviro400-bodied vehicles, many were grouped together, facing south, providing some excellent photo opportunities. The liveries of our privatised bus industry certainly can't be described as dull. 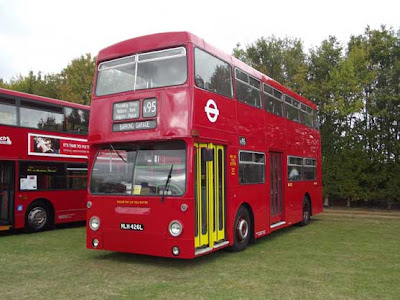 I've always been fond of the ex London DMS. Grimsby-Cleethorpes Transport purchased a number and I have vivid recollections of travelling on them in what I now feel able to refer to as 'back in the day'. This example dates back to 1973, when the LEYTR was a fledgling 10 years old. 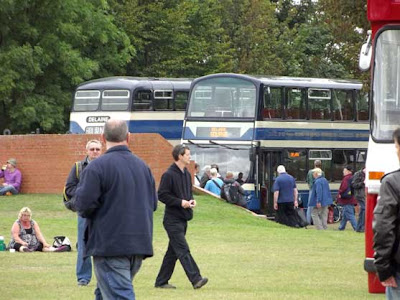 Delaine Buses entered their oldest vehicle that they've owned from new and their newest. A staggering 51 years separates these two vehicles. Both won awards today, too. 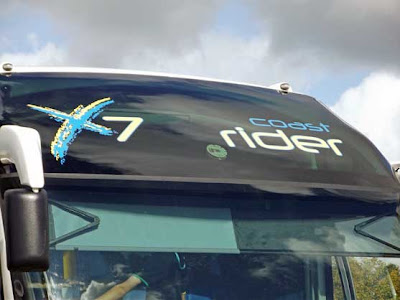 Stagecoach is now introducing the Plaxton Elite to its own services, the first examples going to operate Service X7 between Aberdeen and Dundee, branded as Coast Rider. The branding font looks like Trent Barton's to me - Neuropolitical it's called. 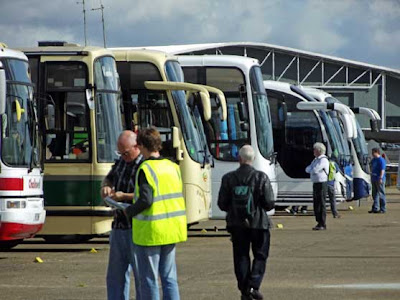 There is plenty of every vehicle type at Showbus. Coaches galore this year, as with others. Many were parked facing south, capturing the sun for the best part of the day. 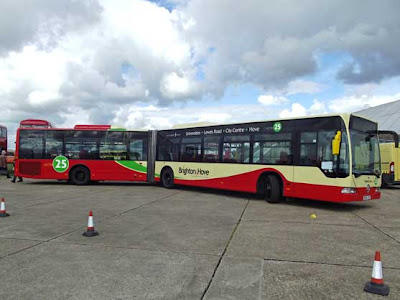 Given a more prominent position this year is one of Go-Ahead's Mercedes-Benz articulated Citaro buses, new to their London operation in 2002. The company has moved a number to its Brighton & Hove subsidiary. Many bendy buses struggle to find homes after becoming life-expired in London. 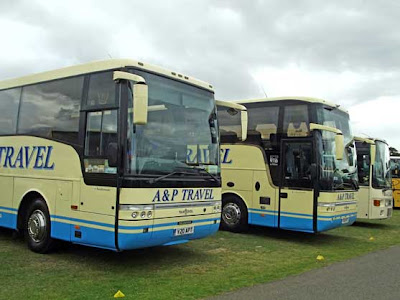 A&P Travel of Sleaford attend Showbus every year, providing a private hire for their regular travellers. This year they brought with them a new addition to their fleet - a tri-axle coach (right). Full details of which were contained in a recent LEYTR.
Posted by LEYTR

The Stagecoach Coast Rider font is Neuropolitical, it's not the same as Trent Barton (it is similar) but it is used by Rossendalebus

"Many bendy buses struggle to find homes after becoming life-expired in London."

The struggle has been because they are not life-expired. They are being withdrawn because of the current Mayor of London's vanity, and after only a few years of service. The book values are therefore quite high and the leasing companies have not been prepared to write these down.

The Mayor's action may well have contributed to an increase in other vehicle contract costs in London as the lessors attempt to recover their costs.

Trent Barton's sub-font may look like Neorpolitical, but as Anon 22:27 says, it is not the same. It is in fact a lot more expensive - anyone using it faces the wrath of copyright law, despite there being negligible differences. Such is the way of design agencies protecting their work.

I also agree with Anon 07:41 re the bendy buses. At least Go-Ahead is finding ways to use them in the provinces.

The problem with the bendy buses was (and still is) that they are too big for many of the roads on which they run. They block pedestrian crossings and are a lethal hazard to cyclists. At certain junctions a bendy turning left will block the entire road.

And they jack-knife in 15mm of snow.

Wonderful machines - just unsuitable for much of London.