In our neck of the woods, the end-of-season rally takes place at the Lincolnshire Road Transport Museum, Whisby Road, Doddington, on the south-western fringe of Lincoln. It is here that the Lincolnshire Vintage Vehicle Society is based and from where they operate their extensive collection of motor vehicles. This blog's first substantive entry, way back in 2007, was uploaded when m'colleague and I visited the Easter Sunday event. The second and final gathering of motor vehicles in November is always a larger affair, with more sales stalls and visiting vehicles and today's event did not disappoint.

We present a number of images from the rally below. 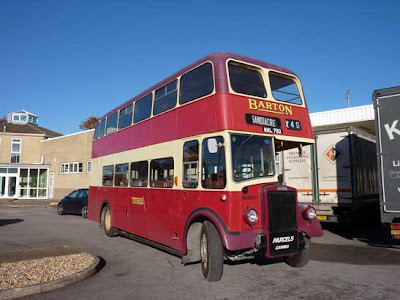 I don't recall having seen this 1948 Leyland PS1/Willowbrook (1957) at a Lincoln running day before. The addition of 'Parcels Carried' where traditionally the registration is affixed was unusual, though those more au fait with Barton Transport will be able to say whether or not this was common place for bus 782 (WAL 728) 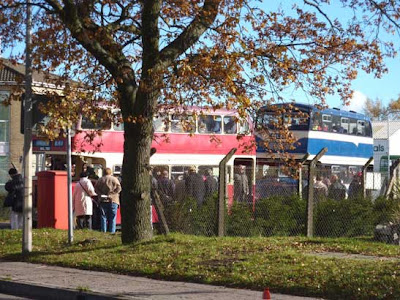 Twice a year the Pyke Road cul-de-sac (opposite the Road Transport Museum) becomes a hotbed of PCV operation as it is from here were most services depart. Three main services are operated: to Lincoln City Centre (every 30 mins); a tour of Whisby (every 30 mins) and a service to the nearby Co-operative car park at the Moorland Centre, which acts as a park-and-ride (every 15 mins). Additional tour services are also operated at various timings. The morning and afternoon peaks are catered for with increases in frequency on the park-and-ride service, plus duplicated on all City services this year. It's nothing to witness up to 16 departures an hour leave here - rivalling that of Lincoln's City bus station. 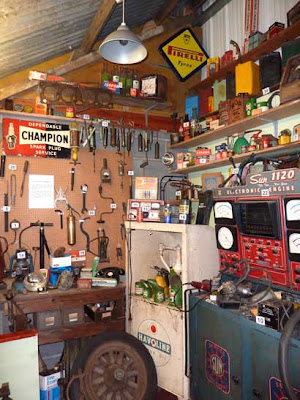 A mechanic's dream. Within the Road Transport Museum a whole host of displays are to be seen. Here in what m'colleague refers to as the 'mechanic's equivalent to a mini-bar' a very well-stocked presentation of what a mechanic's workshop from yesteryear would have looked like is displayed in a small corner. A list of 20 items have been listed and viewers are to look for them - from an Oxo tin to an emergency windscreen, they take some finding! 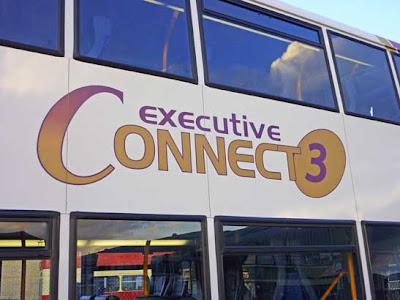 Not all vehicles visiting and operating services are in a preserved state. Stagecoach in Lincolnshire used the occasion to show-off one of it's new leather-seated Executive Connect-branded Scania/Enviro400s, used on the recently extended InterConnect 3 (Grimsby-Lincoln-Newark). The vehicle proved very popular indeed, which is most unusual at an event such as this. I vividly remember being the only one to opt to travel on Stagecoach's first Trident to enter service in London when, now in a preserved state, it provided a shuttle service at last spring's Cobham rally. Sadly, the Enviro400 is let down by its split lower windscreen 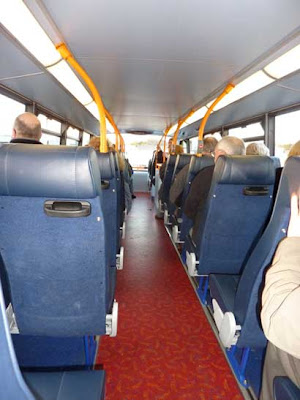 Knowing the problems bus operators in Grimsby face with vandalism to seat backs, we were both very impressed at how presentable the rear seats were in the upper saloon. All six Scania/Enviro400s for the IC3 are now allocated to and operated by Lincoln depot, so that if they ever do stray it is on local Lincoln services. The seat backs are actually blue moquette, not leather, which is probably a sensible solution since the cost of repairing leatherette is considerably more expensive. 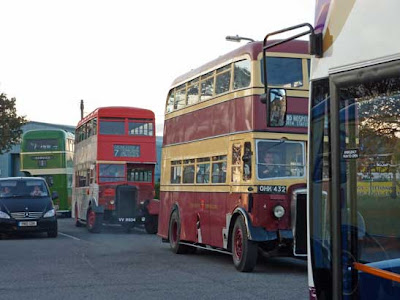 Further evidence of congestion is seen here with a view from the turning area on Pyke Road. Seen here is Colchester 4 (OHK 432), a 1949 Daimler CVD6/Roberts (with a LEYTR member at the helm!) and Northampton VV 8934, a Daimler in the process of being restored. The view is from Stagecoach in Lincolnshire 15651 (FX10 AFK), the 2010 Scania/Enviro400 mentioned above 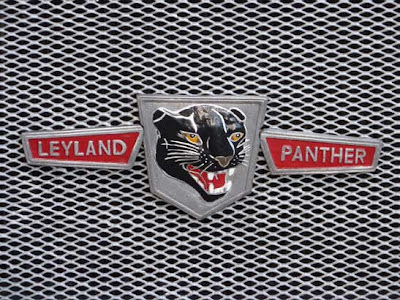 Around 20 visiting vehicles were parked in a neighbouring site and from the North Bank was a regular supporter of local rallies, Hull Corporation 180 (GAT 180D), a 1966 Leyland Panther/Roe. Its chassis badge is in superb condition and worthy of a photo 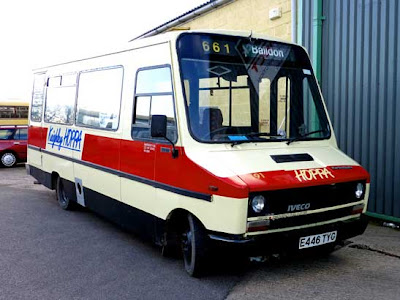 Also worthy of exposure is this Iveco 49.10 TurboDaily, new to West Yorkshire as their 191 (E446 TYG) in 1988 for operation in Keighley. Such vehicles epitomise the early years of bus deregulation for me. How matters have moved on to the situation in which we find ourselves today! 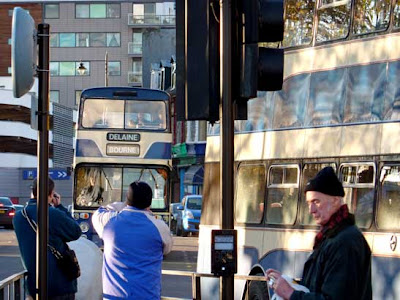 They're England's second-oldest bus company and the last four of the six-generation Delaine-Smith family have been constantly engaged in bus operation. The company provided two vehicles from their trio of preserved 'deckers - Delaine 72 (ACT 540L), a 1973 Leyland Atlantean/Northern Counties can be seen in the distance and Delaine 50 (RCT 3), a 1960 Leyland Titan PD3/W.S. Yates has just passed the photographers. The latter exclusively features on this year's LEYTR front cover, posed at Delaine Close in Bourne. Both vehicles were working the 1500 service from Lincoln city centre to the Road Transport Museum, with 72 being 50's duplicate. 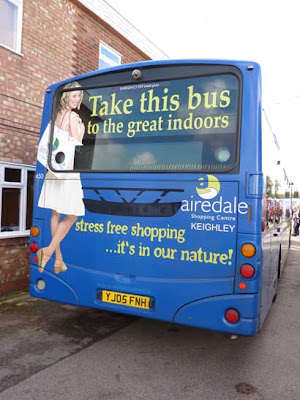 Transdev Keighley's vibrant livery was partially hidden in the area where visiting vehicles were parked, owing to its close proximity to a wall. Despite this, we managed to take a shot anyway - and one not likely to have been captured by many attending. I assume this is the work of Best Impressions - the company who hates hyphens ('stress free')
What stands out for many visitors is the manner in which rallies here at the Road Transport Museum are operated. A very slick operation is provided with literally dozens of buses to choose from on which to ride. A timetable is produced that accompanies the programme for the day, which costs £5, though includes entry to the Museum. Unusually, the bus timetables are listed in vehicle diagram order, which may benefit those wanting to travel on a specific vehicle type, but we'd prefer to see a 'by departure' timetable to choose as the exterior temperature was very autumnal to say the least and such a timetable layout would have made it far easier to plan where to go at short notice and which vehicle to look out for.

All-in-all the day was as excellent as ever. Stall-holders travel from far and wide as do the vehicles. To think that a small yet very significant building in an industrial estate on the outskirts of Lincoln can attract such patronage can only spur its organisers on. Whatever they're doing, they're doing it right!

Living locally in Lincolnshire I can only say I wished I had known about it in advance and I would have been there! Advance publicity a little lacking perhaps?

A few points on the above -

That particular Barton PS1 (yes, PS1 - it is a rebodied coach) hasn't been to LVVS events before - it's one of the Steve Morris (Quantock) collection, and he outstations a few vehicles in the midlands each year, varying which ones from one year to the next.

The service to the City was every 15 not 30 minutes - and 2 buses on most departures.

I make it over 20 bus departures per hour in the 'afternoon peak' with 35 buses in service.

As for the printed timetable / schedule - yours was not the only comment to this effect, although it's constrained by space. Some years we have put a full (time order) departures list on the display boards - maybe we should do that again.

This year, that would not have been easy - the inspectors were working from a hand-written departures sheet which was collated on the Saturday pm and photocopied - on account of late changes including the change to the temporary layout of the Doddington Road / Tritton Road junction which meant re-routing (and since it took longer than normal route, re-scheduling) the Park & Ride service.

Some visitors do prefer a list by vehicle, their priority being to ride on vehicles X, Y and Z, and since many vehicles work on a combination of City, Whisby and Park & Ride services, trying to chase a vehicle through 3 or 4 timetables can be difficult.

Ultimately, I don't think there is a single "right" answer - Winchester for example give you (or rather sell as an optional extra) a schedule graph, which is not a format that many people are used to.

As for publicity - the event was in the listings in Buses, Bus & Coach Preservation, Old Glory and so on - and in the basic listings of the Lincs Echo - we do try and get advance publicity via the local press via press releases, but it depends very much what other stories they have. Our Chairman gets an occasional spot on BBC Radio Lincs. Mass advertising via the press / commercial radio gets very expensive.