The opening of the beleaguered Cambridgeshire Guided Busway will not take place until August at the earliest, LEYTR understands. This is the latest in the ongoing saga concerning continued delays to the world's longest busway, following flooding to the maintenance track and slower than expected progress in general. 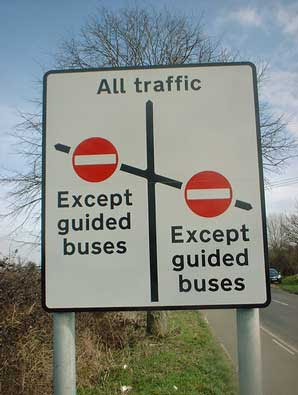 Never mind no entry to all vehicles except guided buses, until late-summer at least, the signs should more accurately state no entry to all vehicles
The scheme's original completion was forecast for spring 2009. It was put back to 'late-summer 09' in April last year. During the summer, the delay was seen to be so substantial that it was once again put back and no date was set for its completion - sure to remove what little confidence was left that operators, passengers and the local authority could deliver and benefit from the calculated time savings such a route would bring.

In February, we detailed how one of the trade press had found out that the Busway's contractor was being fined £14k per day for the overrun, and calculated this to be in excess of £4.7 million. More recently, we understand Cambridgeshire County Council had hoped to at least be able to offer the oh so crucial start date in an attempt to instill at least come confidence in the £116 million scheme's completion. This is no longer to be the case. BAM Nuttall, the contractor responsible for the building of the Busway, is thought to have informed the local authority that it will be at least three months before problems with flooding have been rectified. 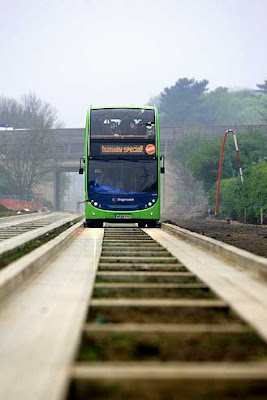 A rare sight indeed - a dedicated guided bus operating along the Guided Busway - taken just over 1 year ago when invited guests sampled a taster day
To their end, we believe BAM Nuttall has at least been talking dates - albeit very distant ones - which is something they refused to do previously. Additionally, the reasoning behind some of the three-month delay period for just the flooding to be rectified has been at the Environment Agency's request.

And while flooding is a problem in parts, the prospect of the Busway's track becoming broken and unusable is also a possibility along some sections as a result of the underlying soil shrinking in dry periods. We can't help thinking that a very large number of problems were overlooked when the former railway track bed was surveyed prior to the Busway being given the green light. Surveyors don't come cheap either, as anyone who's bought their own house will confirm!

The County Council will not accept the Busway until all faults have been rectified otherwise, in so doing, they are accepting the entire system, (flooded) warts and all. It is not in the local authority's interest (nor Cambridgeshire's council tax payers) to accept a system that is only operational in the short-term, with the potential for millions more needing to be spent over the coming years. 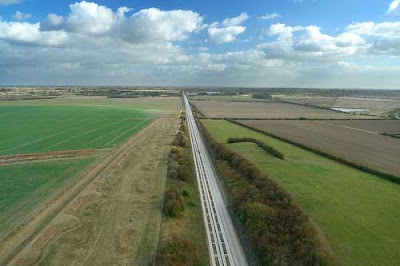 The Busway's pre-cursor can be easily spotted here - former railway line. Conversion from abandoned track bed to guided busway cost more than reinstating heavy rail
(Photo: B Blake)
The Cambridgeshire Guided Busway runs between Huntingdon and Cambridge city centre; however, not the entire route's length is guided: St. Ives to north Cambridge and Cambridge rail station to Trumpington park & ride/Adenbrookes are the only guided sections, with the remainder making use of existing roads. Two operators have been granted exclusive access to the Busway for the first few years - Stagecoach Cambridgeshire and Go Whippet. There had been a third - Huntingdon & District, but this company's parent operator was snapped up with the Busway in mind. One operator then purchased the other's depot.

Not only have technical issues made the presses, but seemingly Russian road signage also blighted one spot in particular. Both Stagecoach and Go Whippet are operating new vehicles in readiness for the Busway's opening - many run on bio-ethanol and offer internal 'air chill' and leather seating. The Volvo/Wright single-deck combo was unusually chosen for Stagecoach, too.