There have been a couple of instances recently that has seen sex raised as a tool wielded by bus companies to promote their wares. Not everyone is, understandably, in agreement with this; after all, sex and travelling by bus couldn't be further detached, though in the age in which we live, there's far less appetite to play things safe. 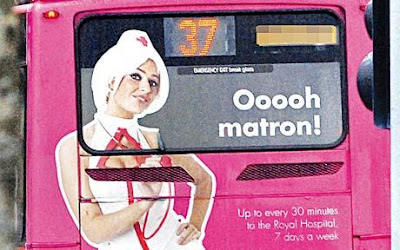 Bed bath, Sir?
Tividale-based Diamond Bus Company made the Daily Telegraph, no less, last month, when the image of an Ann Summers-clad saucy matron was placed on the rear of some of its buses that serve the Worcestershire Royal Hospital. Paired with the exclamation "Ooooh Matron" (that's missing a separating comma), Diamond Bus came in for swift chastisement by the Worcestershire Acute Hospitals NHS Trust, who initially asked for the image to be removed, claiming it degraded its nursing staff - many of which are male.

Have they missed the point? Was it too much? Do Diamond Bus' passengers care? Depending with whom you speak will offer both 'yes' and 'no' answers to all three!

A little nearer to LEYTR territory is Stagecoach in Peterborough, who introduced a fleet of Stagecoach-standard Trident 2s with ALX400 bodies in 2006. All carry clever rear-end adverts in the form of a diary of a supposed Peterborough resident, detailing their day/week in the city. There are insufficient depictions for a different one on the rear of each of the dozen-or-so 'deckers, so some are duplicated. Below is one that seems to have slipped under the duvet, er, net of the local media: 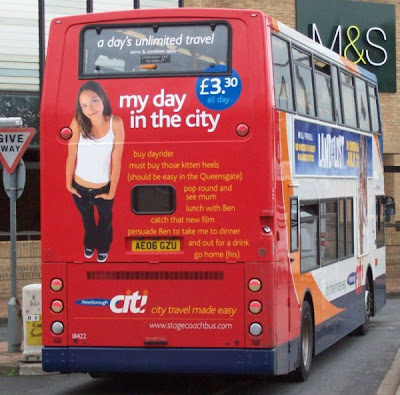 Photo: Paul's Pics
An undeniably attractive girl whose day in the city ends with her going back to her boyfriend's house. Nothing wrong with that, until you see how it's written: "Persuade Ben to take me to dinner and go out for a drink. Go home (his)." A friend shook his head in disbelief when he saw this and analogised: "Buy a Dayrider, get your leg over. Is this how desperate some operators are to sell their services now?"

Perhaps it's a little too subtle for the 'red tops' so Stagecoach has escaped the wrath of The Sun et al.

Back to Diamond Bus and their head of operations, Stephen Bryce, said the company had shown the advert to a group of nurses who found the rear-ended "very funny". He went onto say that it was his company's way of making bus services look less boring than travelling to the hospital by car.

LEYTR Comment: Can humour go too far? Has the humble bus into town become a mobile red light district? Does the average traveller want their local bus service to look less boring considering the vast majority of bus users simply are not interested in the industry provided they travel from A to B at the advertised time and for a reasonable fare? Diamond Bus didn't do too badly out of the Telegraph's piece - depending on your outlook it could have represented PR that money simply cannot buy. And while this, along with Stagecoach's clever rear-enders in Peterborough have been produced by a third party (we suspect both are the work of Mr Stenning), it is the commissioning companies who ultimately give each and every advert the green light - reaping the rewards for a successful and inspiring campaign, and having to release statements to the press when adverts aren't as well received.