FirstGroup is seeking a buyer for its lone rail freight operation, First GBRf, after the company was advertised for sale last week. The rumour mill had been in overdrive since early-April that First wanted to offload its freight arm. The move is seen as a willingness by First to concentrate more on its core passenger businesses and the sale of the company was vehemently denied by First right up until the press release was issued. From 2007 the First livery was added to GBRf's locos. Seen here at Middlesborough is 66723
A number of companies are understood to be interested in acquiring this relative new kid on the block, including one not from British shores, and the clever money was on First signing a deal before announcing anything of the kind to the masses. In the event, however, First made the announcement before a buyer was sought, instructing advisers at KPMG to find suitable purchasers.

For First, the acquisition of GB Railfreight in 2003 was an unusual one, at a time when none of their contemporaries were expanding into rail freight operations. If there was real long-term gain, you can be sure the likes of Brian Souter would have had a sniff, but no. The purchase of GB Railfreight also saw the company become the major shareholder in open-access train operator Hull Trains, who from 2007, has carried First branding. 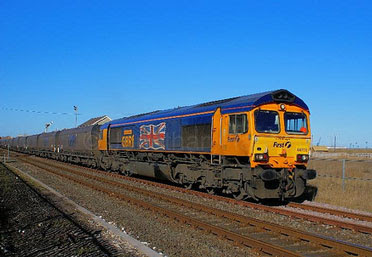 66705 is named 'Golden Jubilee' and carries a Union Jack on its side; it is seen here working a coal train to Drax power station from the North East
First GBRf was formerly known as GB Railfreight and originally entered the rail freight market in 2000. Three years later the company was acquired by First and its new name applied in 2007. Keeping the long-term aspirations of GB Railfreight alive, the business added to its deal with Network Rail (NR) as the provider of materials to engineering work sites, by acquiring coal trains to its portfolio for the first time. 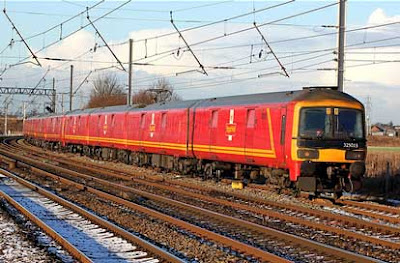 Seen en route to Glasgow from London is one of Royal Mail's Class 325 EMUs passing through Warrington. 325015 is one of a fleet of electric trains that transport over a million items per day for Royal Mail
The company's most significant contact came at the end of 2005, when it resumed operation of post trains on behalf of Royal Mail. The last post trains operated in 2004 as Royal Mail saw the services as inefficient. Despite First GBRf's new contract being for a mere four-month period, it was later expanded until later this year. The route is between London-Glasgow via Warrington and Royal Mail's electric Class 325s are once again in operation. The company's main traction type, however, is Class 66 diesels, which were specially built for the company.

I believed the main reason for FirstGroup acquiring the parent of GB Railfreight (GB Railways) was because they then owned Anglia Railways. FirstGroup had been excluded from bidding for the Greater Anglia franchise and they saw buying GB as a means to an end in still getting that franchise. It wasn't to be however as National Express became the 'successful' bidder in the end.