Currently being built at one of Plaxton's factories are sixteen Plaxton Elite bodies for Stagecoach. They will be allocated to vehicles working company's National Express (NX) diagrams. A number of vehicles operated by Stagecoach are over the NX benchmark of 7 years of age and a decision to replace them was delayed for over six months while NX underwent a succession of take-over offers. 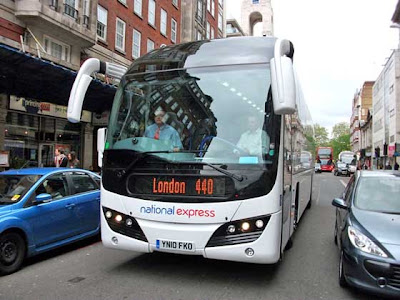 YN10 FKO is performing one of its first-ever trips and is seen here in Baker Street, central London, after travelling from Manchester via Buxton and Derby. It is owned by Selwyns and we believe it is the first Plaxton Elite to operate NX services
Built on the Volvo B9R chassis, the 16 Plaxton Elites represent the first purchase for Stagecoach and will (we believe) be allocated as follows:
** Peterborough - 5, replacing 5 Volvo B12M/Plaxton Paragons
** Oxford - 5, replacing 5 Scania/Levantes, which pass to Dover
** Chesterfield - 6, replacing 6 Scania/Levantes, which pass to Dover 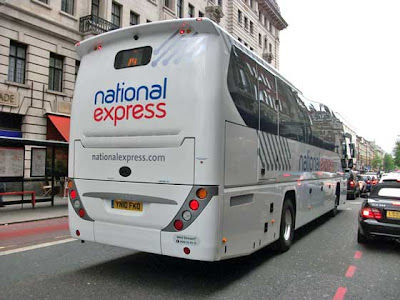 Those currently in build for Stagecoach will be identical to Selwyn example seen here. The rear-end features a spoiler. You'll note the foot holes beneath the emergency exit on the off-side - something the Levantes didn't have
Mansfield will lose its lone Scania/Levante to Dover who will in total receive 12 of this type, all cascaded, and along with neighbouring Ramsgate, will operate Stagecoach's entire contingent of this standard wheel-base type. Mansfield will not receive any replacement vehicles and we believe this will spell the end of its NX work.

The new NX-spec Elites first entered service with Selwyns of Runcorn, who allocated one to its lengthy 440 journey between Manchester and London via The Peak District on Friday. The most striking aspect is the locality of the destination screen - beneath the front windscreen, which is sure to catch many passengers unaware. Though unlike the Scania PB, this won't detract from passengers' views out of the front windscreen (04/54-reg) or the vehicle's aero-dynamicity following the add-on for the destination on the roof (05-reg and newer). 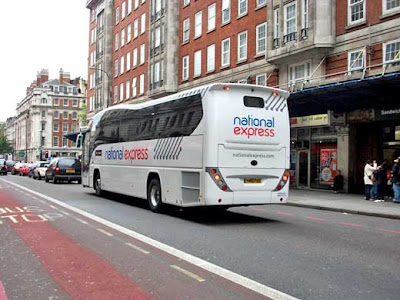 The teardrop effect is most evident in this shot.
The front of the Elite looks a little bulbous, or having a design rather like a teardrop but fits nicely in Plaxton's top-end portfolio, which many will admit has been lacking of coaches of this ilk for many a year! You don't immediately think of Plaxton when conjuring up top-notch coach builders and clearly this was something Plaxton wanted to address, and address it they did. A tri-axle version is available on the Volvo B12B chassis and Stagecoach is no stranger to coaches longer than 40ft, with tri-axle Levantes operating on its NX 444 service linking Gloucester with London, not to mention 15m examples in use on Megabus duties. 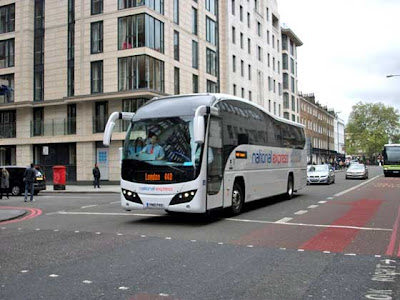 Perhaps the locality of the destination isn't as easy to miss as we first thought?
(All photos: Mark Woodgate)
What we don't know yet is the interior spec defined by NX. A top-end coach clearly requires top-end spec both inside and out, but realistically, when operating quasi-stage-carriage services day in, day out, some of the add-ons as standard for the operator purchasing an Elite for private hire work will simply be unnecessary for NX services. We expect them to be minimal inside, though plush enough to not let the exterior design down.