We were recently sent the item posted below, that attempts to rank the UK train operating companies (TOCs) in order of driver pay. Driving trains isn't particularly easy - and absolutely nothing like driving a bus or coach. With this difference comes the requirement for additional discipline, concentration and the classification as safety critical. Accordingly, the increase level of responsibility is reflected in the rate of pay. 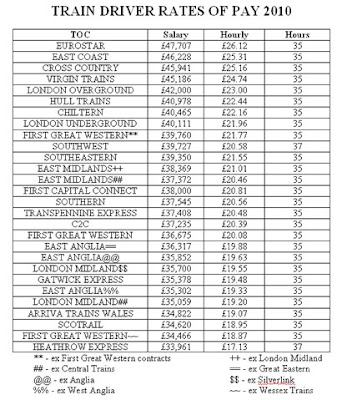 Click image to enlarge
From the table, you'll note that the longer distance TOCs pay their drivers more, with Eurostar at the top - who additionally require their drivers to speak three languages fluently. Disparity between the rates paid by Arriva's two TOCs has been the cause of unofficial strike action, with Arriva Trains Wales drivers angered that their CrossCountry counterparts are paid £11k more a year. There are a number of pay rates for First Great Western and National Express East Anglia, reflecting the current operators being formed following restructuring of former franchises; so too does East Midlands Trains have two rates of pay - one for ex Central Trains employees and another for those drivers acquired with elements of London Midland's franchise.

Virtually all, save GoVia's Southern Trains (shown as Southwest in the table) and open-access Heathrow Express, are employed on a 35-hour week. WSMR is not included in the table, though remaining open-access operator Hull Trains pays its drivers a decent wage. The longer the route, the more route knowledge is required.

We were both fascinated by the table. We've not seen one of this type before. A couple of years ago we uploaded the rates of pay made to Stagecoach UK Bus employees around the country, but nothing regarding the railway industry.

I'm not sure where you got this information from, but I suspect that it may be inaccurate. I say this, because as an employee of Heathrow Express I can advise that all frontline staff have been working a 35 hour week since 27th April 2009. The wages have also increased, but HEx is still one of the lower paying TOCs for drivers.

Thanks for that bucket of information. And I just have to agree that being a train driver takes a lot of consideration, they just deserve to be paid well and be given enough benefits and incentives. It's not just a matter of driving at all, it's the totally of the big train that they handle, the people inside and their safety.

We can't strike in Singapore. It is illegal. We will be arrested and locked up if we strike.

You may wish to read my blog for more details at
http://gintai.wordpress.com/2011/12/16/smrt-train-officer/

In Singapore, Train Drivers are not even compensated for working on public holidays.
http://worldclasstransport.blogspot.com.au/