The bi-annual Passenger Satisfaction Scores for all regulated Train Operating Companies (TOCs) was released recently, and shows that, generally, things are on-the-up. This time, two more open access operators permitted Passenger Focus to ask their travellers what they thought of the services offered. Consequently, the list of TOCs covered now stands at a record high, so decent comparison can be offered.

The TOCs are listed by satisfaction rating and the usual suspects spar for pole position: Merseyrail, c2c and Chiltern. On this occasion, however, all three were beaten by open access TOCs: Wrexham & Shropshire scored a whopping 98% satisfaction, closely followed by Grand Central (95%) and Heathrow Express (93%). Merseyrail and Chiltern came joint-fourth on 91%. No wonder Grand Central and WSMR agreed to be entered into the data - they've single-handedly made the others look statistically worse. 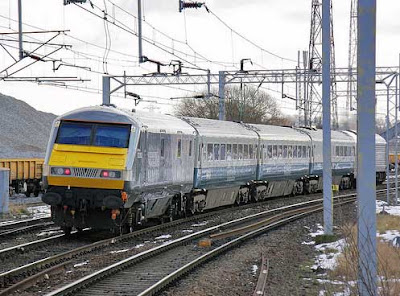 Wrexham, Shropshire & Marylebone Railway has the most satisfied passengers. 98% are satisfied with the level of service offered and only 8% did not claim to be satisfied with the value for money offered. Is this such a shock though? Being a niche operator, they are supplying the demand for a service that was lacking.
Ranking the TOCs differently, though, shows a very different outcome. Being satisfactory with something doesn't mean you're necessarily impressed with it. A bit like us and the Pig Buses. Ranking TOCs according to passengers who have specifically NOT claimed to be satisfied with value for money would surely be considered more revealing than ranking TOCs by those who have been satisfied with the all-encompasing 'service' provided?