Farewell to the Metrobus 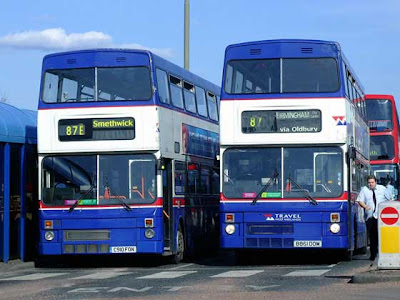 They've been likened to the West Midlands equivalent of London's iconic Routemaster and despite having only entered service here during 1981, over 1,000 have operated in the area for West Midlands Travel (WMT) - that was until Sunday, when the last one ran in passenger service.

The MCW Metrobus prototype was produced in December 1977 and was initially lent to London Transport (LT), who must have been happy with its performance on the streets of The Smoke that they ordered a further 1,400 examples between 1978-1985; they were numbered M1-M1400. The impressive fleet amassed by LT was of the MkI Metrobus and while they were loaned M1401/2 - MkII examples - in 1984, no further Metrobuses were purchased directly.

While the lion's share (just!) of Metrobus operation centred on London, West Midlands PTE (WMPTE) purchased 1,100 examples for its WMT fleet - both MkI & MkIIs. Of particular interest is that a MCW Metrobus was the first PCV to operate along the short-lived guided busway 'Tracline 65'. WMPTE also ordered 50 Metrobuses that were used on limited stop services, and were equipped with high-back, dual-purpose seating. WMPTE took delivery of the first and last production line Metrobuses: 6831 (SDA 831S) and MB70 (G408 OGD), though neither are around today. 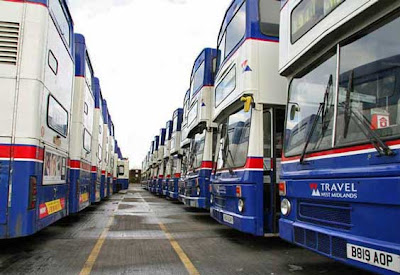 Rows upon rows of Metrobuses were seen at many TWM depots - that shown here is no exception, and was taken as recently as just over a year ago.
It wasn't just LT and WMPTE that purchased Metrobuses new; other dense urban operators such as Merseybus and Strathclyde PTE purchased significant numbers of them and even the National Bus Company dabbled in a limited number for its Maidstone & District and Northern fleets. A 12m tri-axle version was produced for Hong Kong during the 1980s, named Super-Metrobuses, as well as an 11m two-axle example. In total, around 300 examples were produced for Hong Kong - some were even trialed with air conditioning.

The last Metrobuses were made in 1989, with production ceased following the collapse of MCW. The following year, Optare purchased the design for the Metrobus and, along with DAF, extensively redesigned the body to produce the Optare Spectra, which was initially built on the DAF SB250 body, produced between 1991-2005. 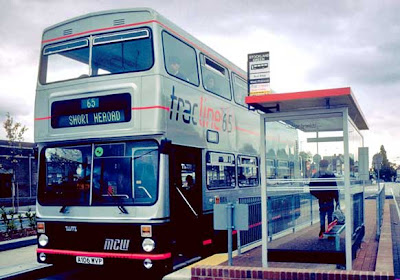 Tracline 65 - the UK's first guided busway and despite being short-lived, ensured the Metrobus was crowned as the first bus to operate along such a specialised route.
But it was in the West Midlands where the MCW Metrobus remains synonymous. The Metro Cammell Weymann factory was located here and accordingly the bus was seen as truly local. As a result of privatisation, WMPTE sold its West Midlands Travel business to National Express during April 1995, who re-branded the company Travel West Midlands the following year and National Express West Midlands (NXWM) during 2007. Henceforth, National Express has been the one directly responsible for this iconic bus' continued operation locally.

2654 (ROX 654Y) was the last-ever MCW Metrobus to operate in service last Sunday, performing a few trips on Service 7 between 1100-1400. Following her last run - and ending what has been estimated as 1 million miles in service - she posed for photos at the aptly-named Love Lane in the Newtown suburb. Well, it was Valentine's Day. NX released a couple of facts surrounding 2654 - the one that caught my eye wasn't how many times she'd been to the moon and back, but that 32,000 had driven her since new. Six Metrobuses are being retained by NXWM until the end of the academic year, exclusively operating school contract services.

Many of WMT's Metrobuses were purchased by operators up and down the country. Last summer, for example, Stagecoach in Lincolnshire's entire open-top fleet of 'deckers at Skegness ran up and down the seafront there, all new to WMT. RoadCar purchased numerous examples from TWM in the three years before being purchased by Stagecoach. LEYTR Chairman and RoadCar MD Paul Hill often comments on how the vehicles were so reliable that they'd planned on running them for at least a decade. With the exception of those at Skegness, no other Metrobus operates in what was the RoadCar fleet now. 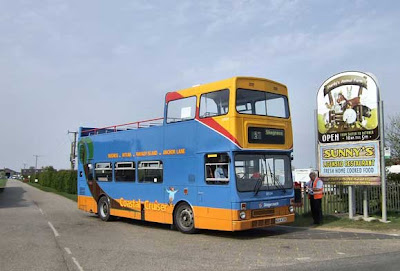 Stagecoach inherited all the Metrobuses acquired by RoadCar and within two years withdrew virtually all save a handful for conversion to open-toppers. Seen here on Anchor Lane in Ingoldmells is one such example - now branded Coastal Cruiser, with a palm tree seamlessly deputising for the rear swirl that forms part of the Stagecoach corporate livery.
That said, m'colleague and I were never particularly enamoured with them. While the last to operate in Birmingham on Sunday was referred to as 'Roxy', on account of her ROX.... registration, we both lovingly referred to many within the RoadCar fleet as 'Pigs' - their registrations began POG.... It was Sod's Law, though, that when one of us accidentally referred to them as 'Pig Buses', it tended to be in front of a devout follower of the Metrobus who would ensure swift and thorough chastisement for not seeing the light. 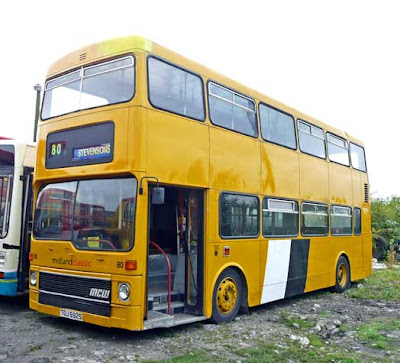 Midland Classic own and continue to operate the first-ever MCW Metrobus, prototype TOJ 592S, numbered 80 in their fleet.
However, not being enamoured with a vehicle (the ride quality was something we both found poor) is not the same as being unable to appreciate it. Clearly, the MCW Metrobus ticked many boxes - both with drivers and passengers. Why else would it have been produced in such quantity for such a long period of time?

Sorry to be an awful pedant here, but:

- WMPTE's first production Metrobuses entered service in the autumn of 1979 (not 1981), operating from Selly Oak garage.

- I thought G408 OGD was new to Strathclyde PTE?

- West Midlands Travel was sold to its management and employees first, in 1991. This event was highlighted by 13 Metrobuses carrying a special green and gold livery.