Half a century ago

It hadn't occurred to us just what a milestone year 1960 was for the railway industry. We'd both read separate articles on the railways over the past few weeks and noted how often the year 1960 was mentioned. Below is a potted history of developments within that year - now half a century ago!

1960 was the year that saw the standard fitment of phones aboard trains decreed unnecessary by the Postmaster General. He was of the opinion that there was insufficient demand by the public for such a service. How things have changed today!

1960 saw a much-improved timetable introduce on the Great Eastern Line to Bishops Stortford, Hertford East, Enfield Town and Chigwell. The 45-mile route saw four new signalboxes installed, two new stations built (Harlow Town was the first - incidentally the first station to serve what was designated a 'new town'); three station buildings that had been sold to members of the public had to be purchased back for public use and the Southbury Loop was used to send passenger services for the first time 41 years.

1960 was the year in which the Class 305 electric multiple unit was placed in service, being built from the year before at BR's York and Doncaster works. 71 were built though none operate today, and all this first class that saw use on the Lea Valley Line have since been scrapped. Class 305s came into being in 1960, operating initially on the Lea Valley Line, though many made their way to Scotland, which is the location of this photo - a rather tired-looking '305' wearing BR's Regional Railway livery in Scotland.
1960 saw Class 45 diesel locomotives come off the production line for the first time. Built at British Rail's Crewe and Derby sites, this class, along with its sister Classes 44 & 46 became known as "Peaks". 127 Class 45s were built between 1960-2 and today 12 are preserved. A Class 46 was destroyed in a novel way 26 years ago. 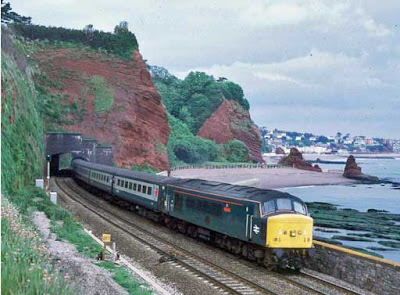 Seen travelling along the Dawlish sea wall in Devon is a Class 45 "Peak".
1960 dawned the era of the high-specification, fixed-formation diesel train that is now seen up and down Britain, operating inter-city train services. The first of its kind was the Blue Pullman - an unusual, if not iconic design - that bore the floodgates for many to follow. While the Blue Pullman was revolutionary, it wasn't universally accepted as a huge step forward within the available technical boundaries at the time. Many saw this train as under-powered and under-used, first introduced on 23 June 1960. By the early-70s, the Blue Pullmans became so unreliable that a mechanic was required to travel on board every service they hauled.

1960 was the year in which the electrification of the West Coast Main Line took place between Manchester-Crewe and some lines into London's Liverpool Street station. It's saddening to think that it has taken a further 49 years for the government of the day to announce further electrification schemes in the Manchester area, with Lord Adonis announcing that Bolton-Blackpool and Manchester-Chat Moss-Liverpool will be electrified over the next few years. Following the Crewe-Manchester electrification's completion, the first train ran on 12 June 1960. 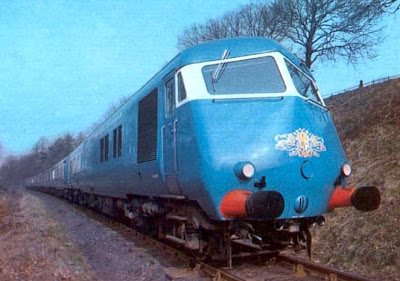 The Blue Pullman was very unique in its appearance, but was so slow - even by standards of the day - that many questioned its credentials as a high-speed train.
1960 saw the opening of the Margam marshalling yard in South Wales om 14 April. At the time it was proclaimed the most efficient in Europe but following the decline of coal, oil and steel has meant the site has become redundant and closed on 1 April 2009. A sad end to a yard that, at its height, occupied an area of 178 acres with 33 track miles, 50 sidings and 240 points and crossings.

1960 saw speedometers introduced to all railway locomotive traction as standard practice. Speedometer fitment to all new locomotives build after 1952 had been mandatory, but it was 8 years later that saw retrospective fitment of speedos to all other locos - steam mainly - take place. Hitherto, drivers of these older vehicles had to effectively guess the speed at which their train was travelling.

1960's total railway network miles stood at an impressive (by today's standard) 18,369 - some 10% down on the peak at the start of World War I though. The London Midland Region chose to close the Sandbach-Northwich route to passenger services and there were a handful of small complete and relatively insignificant line closures: Wigan-Chorley-Blackburn; Market Harborough-Northampton; Bala-Blaenau Ffestiniog; Newbury-Lambourn; Seaton-Uppingham; Leek-North Road; The Mound-Dornoch and in the LEYTR area, Louth-Mablethorpe. The most high-profile closure of the year was between Southampton-Newbury-Didcot. Services over the Severn Crossing were stopped abruptly on 26 October when a pair of barges hit the Severn railway bridge in heavy fog. Services here never resumed, with a knock-on effect that the Sharpness-Lydney route was lost. 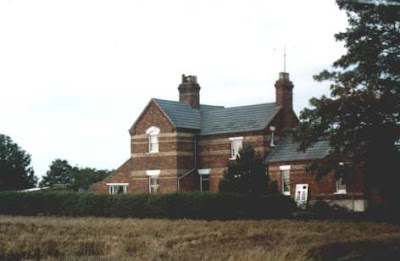 On the Louth-Mablethorpe line were three stations. One was Theddlethorpe, whose station house remains today as a private dwelling, as is so often the case.
1960 gave birth to two new part-electric locomotive types: Birmingham Railway Carriage and Wagon Class 33 "Comptons" and English Electric Class 37. The Class 33s were ordered by the Southern Region three years earlier. 99 were produced in total, with construction taking place over three years and 24 remain today, all preserved. The Class 37s were ordered as part of British Rail's modernisation plan - in the face of cut-backs by the government at the time, who intended to invest more heavily in the building of motorways. Known to many enthusiasts as "Tractors", these unique-looking locos were the mainstay of inter-city services between London and East Anglia and within Scotland. On the 2005 LEYTR RailRover, m'colleague and I were hauled by Class 37 traction on the Caledonian Sleeper between Edinburgh and Fort William. 309 Class 37s were built over a six-year period, with well over 40 currently in preservation and haulage companies such as DB Schenker and Direct Rail Services still employing this stalwart loco today. 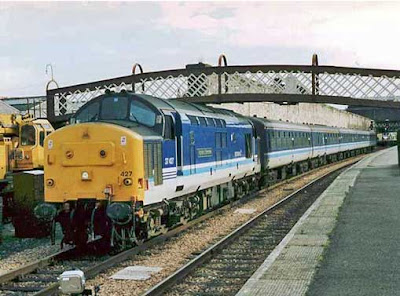 Class 37s still operate in service today, at a time when they're celebrating their 50th birthday. A fair few trains had a 'snout', though none so distinctive as the '37'.
1960 was the year that saw the final steam trains made, with the last three, 92218-20 ('9F' 2-10-0s), being delivered from Swindon Works in March. 92220 was named "Evening Star" and had been the last-ever steam loco built in the UK until Tornado came along 49 years later. Tornado's first-ever passenger charter took place on 31 January 2009. We detailed its second trip. 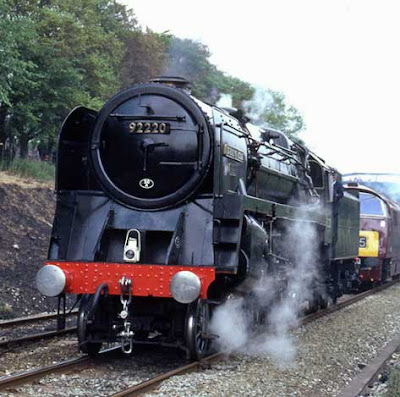 Tornado stole 92220's thunder after 49 years. "The Evening Star" is now the penultimate steam locomotive to be built in Britain.
1960 was the first full year without the Midland & Great Northern Line, which passed through the south of the LEYTR area, running betwixt Peterborough and Great Yarmouth via a couple of routes: one branching off the East Coast Main Line at Essendine and travelling through Bourne, Twenty, Counter Drain and North Drove to Spalding. The other was from Peterborough to Wisbech, with both lines converging at Sutton Bridge to Great Yarmouth, with a branch to Norwich and Lowestoft. With the appointment of Dr. Richard Beeching in 1961 as BR's Board Chairman, things would change drastically forever.... 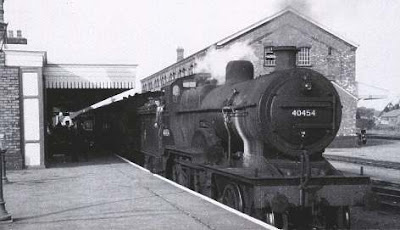 1960 was the first full year that saw no service from Bourne. GC 40454 is seen here at Bourne during July 1955 working the 1621 King's Lynn-Nottingham service.
1960 gave Scotland its first electrified lines, with 51 miles in the Glaswegian suburbs being completed, at a cost of £13 million, though problems were to follow. So ambitious was the plan to introduce electric traction in the Glasgow area, that five serious electric multiple unit transformer explosions took place less than six weeks after the new 25kV 'Blue Trains' were introduced on 5 November). This necessitated the complete suspension of the new timetable - and it would be another 18 months before the full service was introduced. Happier times were to follow, however, and today this catchment has been extended to reach 2.5 million homes. 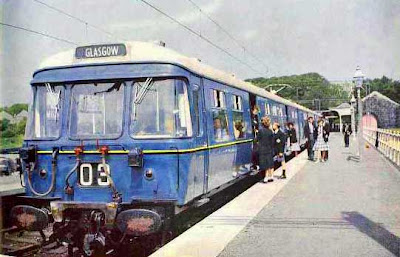 Taken from BR's publicity during the 1960s is this Blue Train at an unknown Scottish station. Following the serious reliability issues that clouded the electrification for the first 18 months, suburban Glasgow has benefited massively and now 2.5 million homes are served by the scheme.
1960 gave birth to the Neville Hill maintenance depot, near Leeds. Initially converted from loco sheds to a base to maintain around 240 diesel multiple units and shunters, the large yard, located just two miles from the centre of Leeds and adjacent to the line from York has been transformed into the all-singing, all-dancing Neville Hill maintenance depot, shared by East Midlands Trains and Northern.

I suspect the 'blue train' is at the affluent Glasgow suburban terminus of Milgavie (pronounced Mull-guy).

I suspect the 'blue train' is at the affluent Glasgow suburban terminus of Milngavie (pronounced Mull-guy).