Having waded through some of the Public Inquiry findings by Scottish Transport Commissioner (TC) Joan Aitken, I can fully appreciate how laborious summarising these for the pages of the trade magazines can be. None more so than that which featured in the latest edition of CBW, which detailed how a landmark ruling had been placed on First Manchester by North Western TC Beverley Bell.

First Manchester was accused of permitting its driving an non-driving (though in possession of a PCV licence) staff of contravening the EC Drivers' Hours Regulations during the Farnborough Air Show of 14-20 July 2008. Specifically, the charge laid down was that those who volunteered were asked to take a day's holiday at the same time as they were voluntarily driving at the Air Show and that the voluntary work would be in addition to their rostered work, which, in the view of VOSA, saw many drivers contravene the EC Regs' minimum daily and weekly rest periods as many journeys conformed to these more stringent rules being, as they were, in excess of 50km in length. 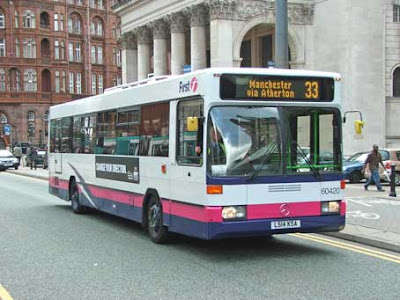 First Manchester admirably admitted that some of its workforce had indeed contravened the EC Regs by failing to use a tachograph to record how their day was spent and that in some cases drivers hadn't observed the minimum required daily rest. They did not believe, however, that any driver had contravened the more lax Domestic Hours Regulation's weekly rest period of 24 hours continual rest within 16 days. While the driving an non-driving staff who'd volunteered all had a one-day rest period following the Air Show, the allegation was that since the work they'd undertaken at Farnborough saw many of these drivers work days in excess of 16 hours, this pushed their work into a second day, and where this second day was categorised as a rest day, it technically wasn't classified as such.

Pragmatically, Ms Bell chose to not linger on this issue as First Manchester had held its hands up, but to illustrate the need for a full review of the PCV driving legislation, instigated a new regime for all driving staff across the entirety of First in the UK. The imposition of Ms Bell's undertaking to First was seen as more effective in the long-term than forcing a reduction in its Manchester operation's O Licenses, as failure to adhere to the undertaking could see swift, effective action taken by TCs in the future. 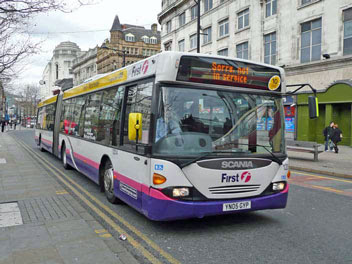 The rest of First's empire in the UK agreed to be bound by the following undertaking:
It was Ms Bell herself who referred to her ruling as a 'landmark' case. Clearly, she wants the industry as a whole to take note and act accordingly. She is seeking clarification on the law at the moment, opting to force her raft of measures on First Manchester as an interim measure.

Currently, it struggles to be any of these.

interesting a traffic commisioner admitting the law needs to be clearer more understandable and easy to enforce so that must be the reason most of her decisions are taken to the tribunal to clarify .another relevant point the traffic commision repeatedly tells us that their role is primarily to keep a level playing field in regards to competition ,thats the need for maintenance,drivers hours etc regulation .what real purpose does bringing a multi national operator to apublic enquiry to clarify something that isnt clear in other words vosa have found aloophole so firstbus should change the law for mrs bell .its nearly 12 months ago when one company in the northwest actually challenged the commisioner on the law and her decision was overturned the tribunal called it A LANDMARK CASE so its a damn shame firstbus go and assist even more crazy regulation AND GIVE MRS BELL ANOTHER BOOST OF POWER WELL DONE YOU WEAKEN THE HUMAN RACE .