Well they would, wouldn't they? The odds would have been so low that a bet would have been a waste of time. Stagecoach were always going to be the ones to trial an amphibious bus. No murmur from any other of the 'big five'. 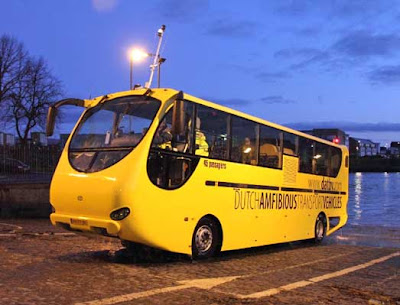 The Dutch-built Amfibus emerges on Yorker slipway in the early hours of 8 February.
Of all the countries to supply Stagecoach with such a vehicle, it was the Dutch who surprisingly came to their aid. Tested between Renfrew and Yorker, crossing the River Clyde, was Dutch Amphibious Transport Vehicle's (DATV) £700k 'Amfibus'. The planned two-day trials were reduced to 'trial', following technical issues surrounding the vehicles operation, meaning that it could only cross the Clyde at high tide, otherwise run into potential difficulties, crashing head-on into the slipways used to meet dry land. We understand problems with the vehicle's air bag was to blame. 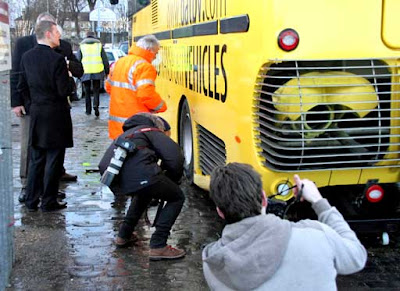 Naturally press intrest was very high and the 12.8m Volvo D12 was posed to allow a thorough inspection before its second trip of the day - which, unknown at the time, was to be its last.
The Amfibus seats up to 50 passengers and drives as a normal road vehicle as well as navigating waterways identical to a small vessel. In theory, the Amfibus is a one-stop-shop for seamless travel, removing the need for passengers to change modes at interchanges. The scope is limited - the Amfibus would be completely unsuited to heavy traffic in city centres - and with each seat costing £14k, the break-even point would be a long way off!! 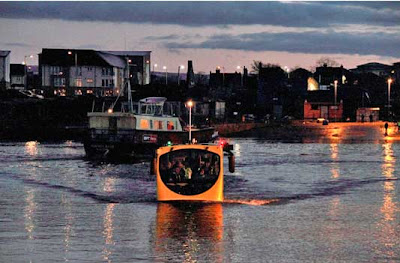 Seen behind the Amfibus is the SPT ferry that is to be withdrawn at the end of March. In the background is Renfrew.
However, the Stagecoach trial was conducted to float (sorry) the idea for a replacement to the existing ferry service that links to the two points - a forthcoming fatality of spending cuts by Strathclyde Partnership for Transport (SPT). Two years ago, Stagecoach announced that it needed cash from SPT in order to retain its cross-Forth hovercraft service, linking Kirkcaldy and Portobello. SPT were not willing to subsidise a private company's loss-making innovation and stalemate was reached. Last November, however, Stagecoach announced that plans are now well advanced to re-introduce the hovercraft service.

Back to the Amfibus, and that a solitary trial was made is not encouraging news at all. Word is that Stagecoach plan to abandon the scheme altogether. If you don't try, you don't know though, so full marks here. 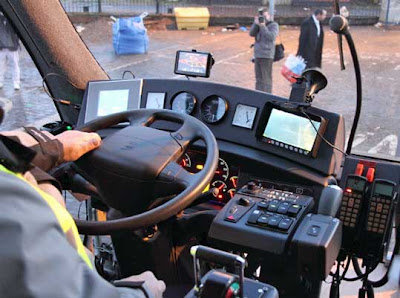 The controls look bus-like though communication is clearly key in the Amfibus judging by the plethora of navigation systems and multiple phones.
While the Amfibus is a costly innovation, ticking the 'complete transport solutions' box on transport planners' checklists, it offers limited scope for new opportunities. In Stagecoach's case, the Amfibus would simply replace an existing service and while this would be appreciated by those resident in Renfrew and Yorker, the cost-per-head per crossing would be astronomical, which would no doubt have to be reflected in the price. 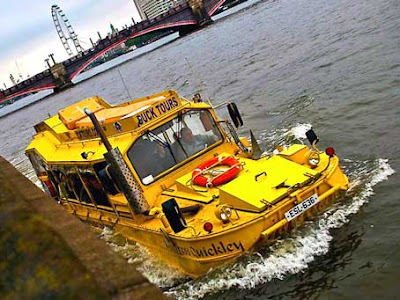 London's Duck Tours use American Army DUKW purpose-built amphibious vehicles and can be seen at around 20 locations world-wide. They do not offer wheelchair access or an electronic destination blind!
London's Duck Tours offers an existing Amfibus-style service to tourists. It's something that's been replicated in Liverpool, too. In London's case, a TfL driver controls the vehicles on land, while a qualified captain takes over when the bus takes to the Thames. I once saw one of these American Army vessels collide with a car at some traffic lights in Victoria. The distance from the driver to the front of the vehicle is around 15 feet. This has been overcome with the Dutch version though.

All Stagecoach Amfibus photos were taken by Donald Stirling, whose Fotopic site can be viewed by clicking here.