We've all been there, haven't we? Some more than others! The train pulls into the station and our heart sinks when we see that only standing room is available - and on occasions that can be a precious commodity on some trains! You may or may not have a reserved seat, but frankly the chances of even getting to the area in which your reservation can be found to 'have it out' with the person sat there is nil. You sigh and/or shrug your shoulders, take a deep breath and step aboard.

Wouldn't it be a great idea - especially for those with the more flexible (and costly) Anytime tickets - for travellers to know the likely loadings of all services from their station? Thanks to The LEYTR Stig, we're able to point you in the direction of one Train Operating Company (TOC) who's undertaken such a scheme. 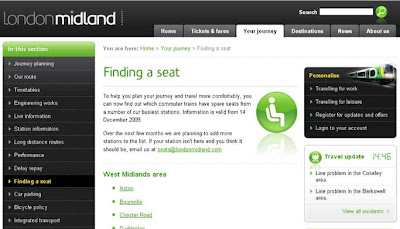 In the first we've seen (our Stig tells us that no other TOC into London has undertaken this measure), GoVia's London Midland company should be congratulated for compiling average loadings and offering its long-suffering commuters and leisure travellers alike a wealth of loadings information.

London Midland's finding a seat page could potentially be pure gold, especially for those able to delay their journey by an hour or so. The site divides into two sections: the first lists a selection of its key West Midlands station; the second lists key London commuter journeys from the West Midlands. If we stay with the first section, a list of 14 stations are listed alphabetically. We'll choose the second - Bourneville, for no other reason than it was a location as seen on TV recently. 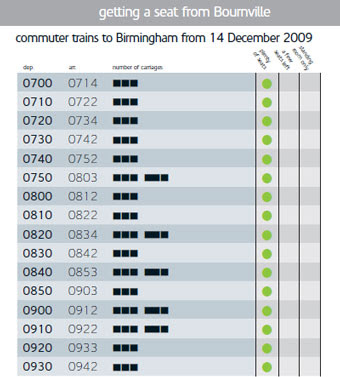 Click on Bourneville and a pdf will open that lists what London Midland considers its peak journey trains to central Birmingham against the number of carriages and a traffic light system which rates the likelihood of getting a seat. Green means 'plenty of seats', amber means 'a few seats left' and red means 'standing room only'. Perhaps Bourneville wasn't the best example, since all affected trains (from 0700-0930) are shown as green. Click on Five Ways, however, and things are not so rosy! 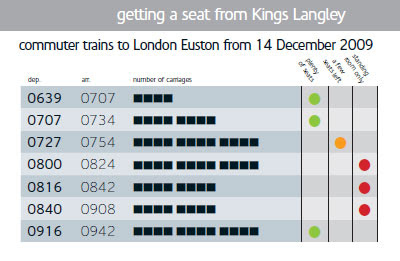 The second section is very similar to the first, except the stopping pattern employed to London Euston isn't as straightforward as to Birmingham from its orbitals, so some stations have far more trains than others. It is the stations with few peak time trains that have pdfs covered in red dots. Kings Langley, for example, has - despite 12-car EMUs - most of its commuter trains (7) offer standing room only, while Blethcley - further up the line and with 13 journeys - looks like a seasick frog being so green!

West Midlands to Birmingham journeys seem to only show the morning peak, while London Euston shows journeys in both directions. London Midland say their traffic-light system is a projection, based on current data, though pledge to update it every three months as well as add further stations to the list. Where additional carriages are not permitted to lengthen trains further, this is also stated, presumably to limit hundreds of emails asking the TOC to simply lengthen its trains.

The general public don't get to see the actual figures on which London Midland's seat availability is based so we have to hope they've not fudged their figures to classify a train as having 'plenty of seats' when, say, 7 seats in a 12-car EMU are all that is regularly available at some stations. After all, the rail network doesn't class some trains as having operated late unless they've arrived at their ultimate destination in excess of 9:59 beyond that of the timetable.

Cynicism aside, it's very pleasing to see that a TOC is at least offering its passengers the chance to travel on a later train if their itinerary so allows. Some TOCs may shy away from this openness, suffering from overcrowding far worse than that endured by London Midland; peak time Thameslink trains would see its station lists look positively plague-ridden, with red dots everywhere!

You're right to be cynical. As someone who commutes with LM from King's Langley, the green traffic light system wrongly implies the trains are quiet and that spaces can soon be found. Perhaps Mr Ludeman would like to do the same commute as me. He'd conclude that as commendable as the traffic light system is, it can be incredibly misleading!