If you have access to more than just the four terrestrial channels, you may well find yourself flicking past a fly-on-the-wall documentary concerning the Police, or more specifically, Traffic Officers. There is a plentiful supply - Motorway Cops, Road Wars, Traffic Cops - and if I'm honest, I rather quite enjoy them.

One thing I'm always perplexed about is that at virtually no time do any of the people stopped by the Police query who the guy is in the high-vis jacket and what is he doing putting his camera in their face! This may be edited out, or you could argue that the alleged miscreant has more than enough to worry about. On seldom occasions, though, someone does ask.

The Police generally respond by saying: "Don't you worry about the camera, just answer my questions..." though on a couple of occasions now I've heard them state: "He's filming us, not you." Further queries are made about the legality of this and there follows: "He's in a public place, he has every right to be filming".

Extending this to being stood on Her Majesty's Highway, taking photos of buses, or stood on Doncaster station taking photos of approaching freight, the law is no different whatsoever. Those of us who regularly take photos know that provided we're not on private property, and the subject matter of interest is not sensitive or illegal, we should be permitted to take photos to our heart's content. Yet so often it is the Police who have cause to enquire as to our legitimacy. 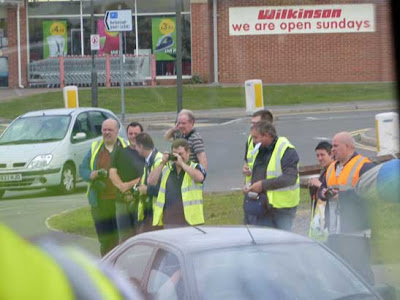 It is 'perfectly legal' for a chap with a camera to film Police cautioning a 15-year old lad after being found in possession of Cannabis, provided it takes place in a public place. Yet potentially millions out there think the above photo (taken from a Bristol VR in South Yorkshire) is both illegal and suspicious.
I feel like recording the scene from Traffic Cops where two constables from Slough tell the mother of a 15-year old boy that it is perfectly legal to film her son's arrest following being found in possession of a Class C drug as he's in a public place, and upload it to my mobile phone so that it can be played as and when required. Suddenly, stood in Ringwood's Meeting House Lane photographing NX coaches seems a lot less significant!!