I, like many, was heartened to hear that a second series of Great British Railway Journeys has been commissioned and that it will again see Michael Portillo as the traveller and narrator. I've not met anyone who's not been at least entertained by the first, twenty-episode series. I stumbled across the programme at the start of Episode 6 and like over 2 million people, stayed hooked to the end. 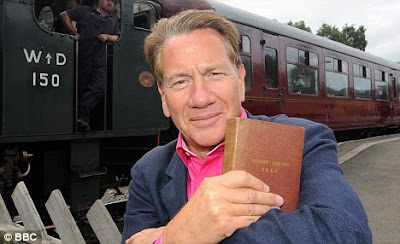 Michael Portillo and his trusted Bradshaw's Railway Guide.
For the uninitiated, Great British Railway Journeys was a series that culminated four separate A to B railway journeys here in the UK, chosen with the Bradshaw's Railway Guide in mind. This publication, first sold in 1939, was unique in being the only guide to the country for those travelling by train. With the Victorian era post-John Bradshaw seeing further growth, and cuts under Dr. Richard Beeching, there are many differences in today's Britain compared with Bradshaw's! New lines were to be built and closed and there were massive changes in the timetables produced by Bradshaw, in both frequency and destinations.

Another 'angle' which the series took was to illustrate how, at the time of Bradshaw, the railway influenced the areas through which it passed and served and how this revolutionised the Britain we know, see and love today.

As a politician, I didn't care for Michael Portillo. I was an A Level Government & Politics student during part of Portillo's tenure as a Cabinet member and senior politician within the Major Conservative government, and I knew more than my peers, at least, as to the state of the political governance of the country at the time, and the way in which specific individuals within the ruling party were shaping it. There was a fair level of satisfaction in politics when Portillo lost his - what was seen as the fairly safe - Enfield South seat when Labour came to power in 1997. He returned thanks to a bi-election in Kensington & Chelsea in 1999 and soon held his highest-ranked post, that of Shadow Chancellor of the Exchequer. It was widely understood that he didn't see eye-to-eye with the then Tory Leader, William Hague and when the latter chose to stand down, Portillo stood for Conservative Leader himself, coming in third place. He left the political scene in 2005, claiming to have become disaffected. 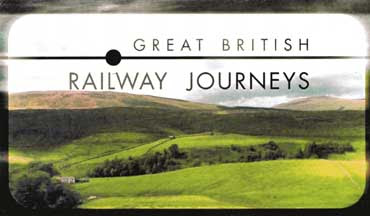 A second series has been confirmed by Michael Portillo, but we'll have to wait until 2011 before it is aired.
Speaking with some friends who've also found Great British Railway Journeys a fascinating series, all have agreed that specifically Michael Portillo has been the sole reason why this was so. His interest in the subject is immediately noticeable and this has certainly done no harm to his image and profile. To those who have a mere passing interest in the railways, some of the continuity gaffes have been hilarious, though, with the livery and type of loco or diesel multiple unit changing from aerial to ground shot on many occasions *per episode*. While it makes me chuckle, it's not something that detracts my enjoyment. Even the theme music, that has resonanates the motion of a train, was fitting.

Of Series 1, the twenty episodes were split in blocks of four individual journeys, each occupying a week's worth of air time (five episodes). The first took Portillo from Liverpool to Scarborough via Eccles, Manchester, Bury, Todmorden, York, Pontefract, Bridlington and Filey; the second was from Preston to Kirkcaldy via Morecambe, Settle, Garsdale, Windermere, Kendal, Carlisle, Glasgow and Edinburgh; the third betwixt Swindon and Penzance via Bristol, Yatton, Weston-super-Mare, Torquay, Totnes, Bugle, Mevagissey and Truro; and the final trip was between Buxton and London via Matlock, Cromford, Burton-on-Trent, Walsall, Bournville, Coventry and Watford.

Some aspects of the trips were covered better than others; for example the Monsal Line in the High Peak of Derbyshire got mentioned in two sentences, yet almost half an episode was devoted to the world's oldest factory in Cromford. I found most interesting the third trip into Cornwall, as it's an area I'm not familiar with at all. I'd also dearly have loved to see the first trip/five episodes, with Portillo visiting the LEYTR area. 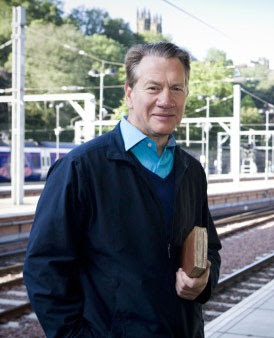 Portillo suggests making a book before the next series is shown, as copies of the original Bradshaw's Guide are difficult to find and expensive! A 1910 copy is on sale with Amazon for £145.
The good news is that the series appears to be lined up for a repeat showing on BBC1 (no less) on Sunday evenings, starting this Sunday at 2225hrs. If the remaining 19 episodes are shown at this frequency, it could be well into the summer before all the episodes have been aired. As I write, the decision to air the repeat showings in high-definition has yet to be made; the original series was, and I thoroughly enjoyed the aerial shots with added clarity! I also thoroughly enjoyed Portillo's filmed narration - where he seemed to be making up his lines as he was stepping off trains or boarding them from busy platforms. Surely a one-take shot situation, done consummately by this seasoned speaker. He is a very good orator and I believe his enthusiasm for what he was doing shone through far more than the conviction he had for his politics.

I'd like to have seen greater contrast made between the railway as detailed in Bradshaw's guide and that of today. So far as I know, not once was the name of any train operating company uttered, save a mention in the end credits to those who'd conveyed him on that occasion. Portillo regularly travelled Standard Class on trains where First Class was available, though made the right choice when making a short trip aboard a Virgin Trains Pendolino and availed himself to the gratis facilities therein (take note prospective East Coast franchise bidders).

However, to the BBC, what spoke volumes was the average 2.3 million viewers who tuned in - by contrast, the show that had occupied that shot before (a Strictly Come Dancing spin-off) saw only 0.4 million viewers more - and you'll be all too aware of the mass-hysteria that surrounds programmes of that ilk!

What form Series 2 will take is unknown, though Michael Portillo said: "I am delighted that the BBC has asked us to make a second series. I am hoping that it might repeat the first and I am discussing whether we could bring out a book in time for the second series. It could be a good thing since copies of Bradshaw’s are very hard to find! We were lucky to get one from an antiquarian bookshop."

For the past few years, the Bradshaw name has been resurrected on an alternative version of the National Rail Timetable (NRT). It was created following the DfT's hastily-made decision to withdraw the main NRT, only to reprieve it at last minute. Although there are now two such publications in production, the modern Bradshaw's has found favour with enthusiasts and regular train travellers alike (it's also cheaper than the TSO edition). Buy your very own modren-day Bradshaw's guide here.

Thank you so much BBC for this wonderful series,a true plearure to watch and would love to own it on DVD.Can watch it time and time again without getting bored,brilliant.Looking for ward to series 2.
yours sicerely
Elaine Armstrong

I cant wait to see season 2, Michael and the crew were travelling on two of the trains i was route learning on last week....hes doing the west highland line in scotland, took the 0821 Glasgow Queen St to Oban train on 5/8/10 alighting at Crianlarich, then travelled up towards Oban, and again on the 1256 Oban to Glasgow Queen St train on 6/8/10 alighting at Crianlarich and moving onto the Fort William train

We were approcahing the 17th green at http://www.prestwickgc.co.uk/ to find Michael and crew filming series two from the 18th tee.

Looking forward to it's airing!