Many thanks to the LEYTR Chairman for providing us with today's fiery entry!

It was a normal day in Sharon Springs , Kansas, when a Union Pacific crew boarded a loaded coal train for the long journey to Salina. Just a few miles into the trip a wheel bearing became overheated and melted, letting a metal support drop down and grind on the rail, creating white-hot molten metal droppings spew down to the rail.

A very alert crew noticed smoke about halfway back in the train and immediately stopped the train in compliance with the railroad regulations.

Unfortunately, the train stopped with the hot wheel over a wooden bridge with creosote ties and trusses. 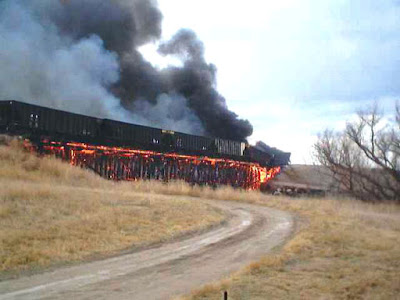 The crew tried to explain their supervisors, but were instructed not to move the train. They were instructed that the self-same railroad regulations that warranted the train to be stopped also prohibit moving the train when a part is defective.

Most definately breaking the rules is the driver of this articulated lorry in Louisiana, USA. We have warnings on our undulating level crossings that a risk of grounding can occur and that drivers of large vehicles most likely at risk of 'bottoming out' should phone before crossing. Sadly, this did not happen a couple of days ago, as the clip from Fox News below shows (it starts with a randomly-generated advert though):