Perhaps the absolute worst time for Eurostar to suffer such debilitating mechanical failures to its fleet of electric Class 373s was in the run-up to Christmas. This was exactly what happened on Friday 18 December, when five trains broke down in the Channel Tunnel. Each train contains seats for a maximum of 700 passengers, so doing the maths sees an approximate 3,500 people directly affected - all with stories to tell and opinions about the operator's handling of the unprecedented incident to air. 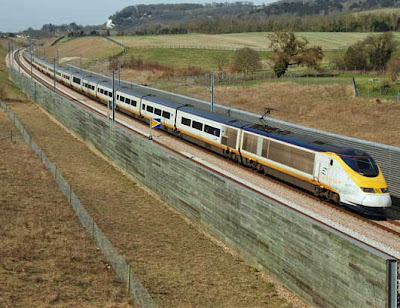 Despite the look of an incredibly long train with 14 carriages, the Eurostar Class 373 is actually made up of only 2 units. It is impossible to walk from one end of the train to the other, as the half-way point (where both units meet) is impassable.
The 3,500 on board the stricken sub-Channel trains were only the start of those to be affected by the ensuing fall-out, with a further 86,500 affected following a decision taken by Eurostar to cancel all London-Paris/Brussels trains between 19-21 December - a total of 146 journeys.

The breakdowns were initially thought to be the result of the change in temperature the Class 373s were subjected to when the entered the warm Channel Tunnel. Although Eurostar disagree on a technicality, their trains are variants to what the French refer to as TGVs (Train à Grande Vitesse), and TGVs in France do not have to travel for miles in sub-zero temperatures, then 'dive' into a 25C tunnel for 50km. This causes unnaturally high humidity levels, thanks to fast-thawing snow and ice, which damaged snow screens and door shields, not to mention the roof-mounted power units, penetrating the trains' electrical systems. 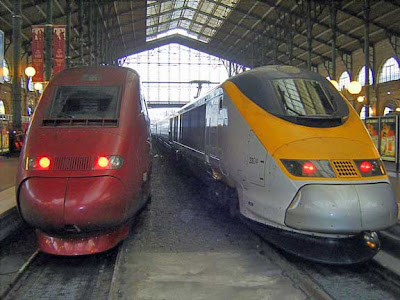 Admittedly, the exterior similarity between the Thalys TGV and that of Eurostar, as shown here at Paris Gare du Nord, doesn't necessarily mean they're the same type of train. Eurostar claim their Class 373s are not TGVs under the skin, but the TGV website says the opposite.
This was only part of the real problem, which lay in the power car at the rear. With train forcing its way through the freezing cold air at high speeds, the displaced freezing air and snow passes over the top of the train and the rear power car, which was allowing significant snow ingress, though this was not immediately identifiable since the snow was very dry and very fine. So fine was the French snow that it penetrated the seals and screens so that it was actually settling on the engine. After a short period, the fine snow's expanse was so great, ice was also present, and with the change of temperature in the Channel Tunnel, the whole lot melted causing electronic failure.

Eurostar made emergency modifications to its entire fleet of '373s' including new door seals, which would repel the fine, dry snow; modifications were made to apertures that had hitherto caused no problems; increased the number of motor bloks on trains needed to enter the tunnel from 2 to 5; and loose snow running speeds were reduced to 170km/h, reducing ice fall when trains pass. 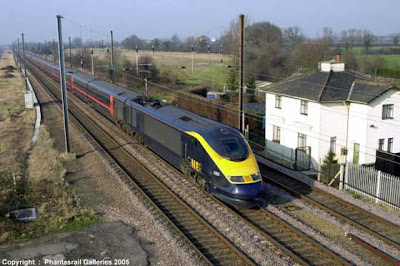 During the early to mid-naughties GNER used Class 373s on its London-Leeds service - one even featured on the front cover of the 2005 LEYTR magazines. They were named 'blue whales' by signalmen.
Eurostar Chief Executive Richard Brown, a man whose lecture early last year on the need for Britain to have a new High Speed Line I found most informative, claimed that this type of snow had not been experienced by the operator before, citing it a 'new snow'. It was so fine it penetrated air-tight door seals. Train builder Alstrom, who built Eurostar's trains, said that TGVs running between Paris, Brussels and Amsterdam operate with the same number of power systems to those on Eurostar's '373s' and are open to the same 'new snow' but don't fail. They tend to operate part of this route in double-rake formation though (Brussels-Paris), so there are two power cars, one being in the centre of the train and the other at the rear. Could this be why these TGVs (operating for Thalys) don't fail, because the rear-most power car is subjected to proportionately less snow? And the lack of a 50km, 25C tunnel?

From a passenger's perspective, the lack of information given was the main reason for criticism. The queue for St. Pancras on Saturday 19 December stretched half way to Euston station, as many mistakenly believed services were resuming. With such an unprecedented failure at such a busy time, Eurostar have been on a very unwelcome learning curve. You can rest assured that its disaster response procedure will have been comprehensively amended.

Those 3,500 stuck on the five Eurostar trains that failed in the Channel Tunnel were probably the luckiest of all travellers at that time: they got to their destination (eventually), were given £150 cash, their money back and a fee journey with Eurostar in the future. 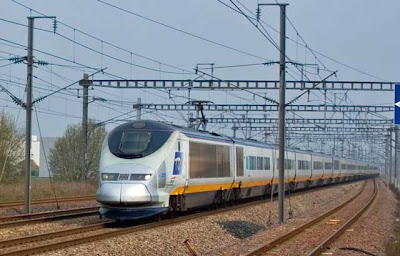 Some of Eurostar's '373s' have found work with the French state-owned SNCF - here is one with the addition of TGV vinyls to the front car. Are Eurostar really sure these aren't TGVs?
Where Eurostar have let us all down the most is the adoption of a new word - Winterisation. It's a new term rail mechanics use (apparently) to mean preparations for ensuing winter conditions: how modifications to trains can be made to prevent unscheduled breakdowns directly attributed to the wintery conditions. I've refrained from using this term throughout this entry, it's a shame Eurostar didn't! Typical Winterisation includes installing hessian snow screens in the power cars and deep-cleaning the main mechanical power block.

Right place to share and get the travel information about eurostar and relevant regarding its services and tickets bookings.Get more through train from london to paris.